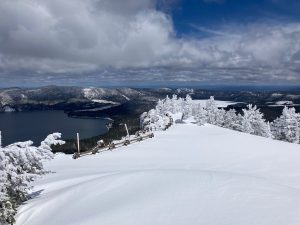 Paulina is the highpoint of the Newberry Volcano, an area southeast of bend that Wikipedia describes as “a shield-shaped stratovolcano.” What this actually means is that there is a higher-elevation wooded area east of the main Cascade Crest with one decent-sized mountain (Paulina), two large lakes in a crater to its north, and a bunch of smaller basalt cones. It has silly day-use fees during tourist season, but is free to use while gated for the winter. It looked like another good bike-n-hike candidate from the highway, with the division of activities dependent upon snowline given the road to its summit. 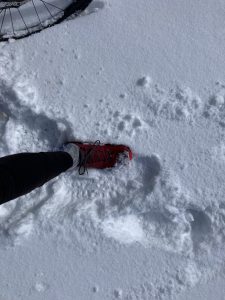 End of the ride

Expecting the snow to start high, I headed out with a modest amount of food in my jersey pockets and one bottle of water. I found the gate at a snow-park about ten miles in, then began to see worrying fresh snow on the road above that. The snowpack increased alarmingly quickly as I climbed: by the time I reached the entrance station, I knew I would only be able to ride on plowed roads. The turnoff to Paulina was clearly signed, but just as clearly unplowed, so I leaned my bike against a tree and set off for an unexpectedly long snow-slog. 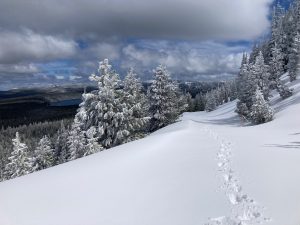 I hiked the road to the trail, then thought I might cleverly save myself a mile by taking this more direct route. This worked until the trail traversed a steep, north-facing slope, where the snow was less compacted and I began postholing. I retreated and contoured around to follow the road which, because it sticks to the south side and is more open to sunlight, had less and firmer snow. It was still a slow slog, prompting thoughts of turning around, but I knew I would probably never return to this obscure mound, and the views kept me engaged. The trees were again covered in a thick layer of rime, and I could see the Sisters and Diamond to the west and north, covered in a fresh coat of white. I planned to ski them soon, so this was an encouraging sight. 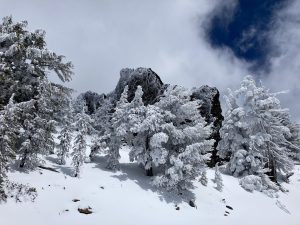 Much slogging later I reached the summit, which had an outhouse, buried parking lot, and interpretive sign. I was disappointed that it lacked the usual Oregon cell towers and fire lookout, but the views and reception were still acceptable. The Newberry Caldera contains two lakes at similar elevations, and I was surprised to see the western one completely melted while the eastern one was still almost entirely covered in ice and snow. The endless forest, divided into green and white by a sharp snowline, was a jarring contrast to the drought and ongoing fire back in my native New Mexico. With snowpack surviving less into the historically windy Spring, and forests primed for burning by mismanagement and bark beetles, the Southern Rockies’ future looks orange and bleak.

The descent was almost as much of a slog as the climb at first, but I was able to jog lower down as the snow became thinner. It may have been sunny, but it was still cold out, and once moving quickly and off the reflective snow, I had a tolerably cold ride back to the car. I had some decisions to make, so I headed back to La Pine for internet at the library. Looking at the forecast and considering my options, I decided to backtrack a bit to Willamette Pass for some skiing in a sort-of weather window. I found bored teenagers and dog turds in the nearby park, but locked restrooms and no open spigot. Feeling like somewhat of an unwelcome invader, I grabbed a few things at the Grocery Outlet, then drove up to the pass to camp at a snow-park.

Near the end of the ride

End of the ride