Swimming in the P-trap 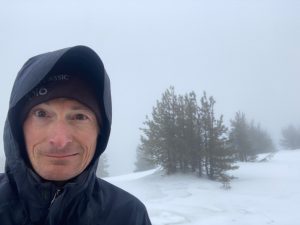 “Peak-ness” is like pornography: as Potter Stewart said, you know it when you see it. The Matterhorn and Rainier are clearly peaks; so are North Maroon and Mount Morrison, rising above Maroon and Convict Lakes. Impressive though it is, Castleton Tower is not. Shiprock? It’s hard to say. While a peak is intuitively a notable highpoint, trying to quantify that intuition is not easy. Elevation alone is clearly not enough: the town of Leadville lies above most of Washington State, but the North Cascades are far more peak-like than the talus mounds of the Sawatch. Other measures include isolation (distance to the nearest higher thing), prominence (rise above the connection to that thing), and combinations of those two. Then there are even more elaborate ones like Reduced Spire Measure, the integral of angle from the summit to all surrounding points.

Watching the definition of a seemingly-simple concept spiral into endless complexity is a delight to philosophers, but seems overdone for something trivial like peak-bagging. When it comes to lesser peaks in unfamiliar areas, I find prominence sufficient: it favors large solitary mountains and range highpoints. Unfortunately it has the weakness of favoring volcanoes and small ranges, i.e. Oregon and Nevada, so chasing prominence leads to what one could call the “P-trap.”

After Shastina, I found myself faced with an extended period of bad weather in the northwest, and therefore took a dive into the P-trap of northern California and southern Oregon. This area at least has trees, so it’s not as grim as Nevada, and many prominent peaks have roads leading to antennas and/or fire lookouts on their summits, making them attractive bike-and-hikes. Here are some of the summits I scaled in this brief effort to improve my “P-index.”

Black Butte is Shasta’s mini-me, a basalt cone next to the highway to its west. It is a nightmare of loose volcanic talus, but fortunately it had a lookout, and therefore a trail. Only the concrete foundation remains of the former, and the latter is slowly being reclaimed by the rubble, but it is still an improvement over the peak’s original state, making it a good short objective. As I ascended, I watched Shasta being swallowed by clouds, grateful that I had skied (most of) it the day before. It was cold and windy on top, so I did not stay long before hobbling and jogging back to the car.

Goosenest is another old volcano north of Shasta on the way to Klamath Falls. It would ordinarily be a good bike-n-hike from the pavement, but it was afternoon and raining off and on by the time I reached it, and I did not want to get my bike dirty and did not have enough daylight. I was worried about the dirt forest roads, but they were well-packed and not yet saturated, so my sorry vehicle had no trouble reaching an intersection a few miles from the summit. From there, I took the direct route, hike-jogging a road to an old quarry on the south side, then following a trail from there to the summit. The upper trail had some big snowdrifts, and it was snowing with no visibility on the summit, but it was worth just as many peak points. I jogged the descent, then continued to Klamath Falls.

Lying well on the rain shadow side of Oregon, Stukel is another classic Oregon ride to radio towers. To make it a bit more challenging, I started from town, taking the canal bike path to a rail trail heading east of the city. The rail trail continues remarkably far out of town, but I turned south on some farm roads, then located the gravel road to the summit. This was challengingly steep at first, and I barely managed to keep my rear wheel from spinning out while toiling up in my lowest gear. Fortunately the grade eased beyond the first couple switchbacks, and I had an easier time the rest of the way to the summit. I once again had a magnificent view of clouds where Shasta and McLoughlin should have been, with clearer skies to the south and east.

Hogback is Klamath Falls’ Atalaya, a “workout peak” with 1500-2000 feet of elevation gain and many routes leading to its summit. It was a good target for a morning of miserable weather. After looking around for awhile behind a closed and gated church, I took the wrong path for a bit before getting on the direct route to the summit, an unofficial trail that is relentlessly steep at first. I crossed the road from the other side, tagged the lookout, then quickly retreated in a storm of ice pellets. If I lived in Klamath, I would no doubt put in dozens of laps and loops on this peak.

Walker is another lookout and comms tower, east of the highway between Klamath and Bend. It would normally be a moderate ride, but snow turned the last couple miles into a hike. I biked from the highway, taking a well-maintained main road to the turnoff, then following the lookout road until the snow became too continuous to make pushing the bike worthwhile. This road had some interesting rubber water bars, which were several inches high, but just flexible enough to make it almost unnecessary to bunny-hop them. I checked out the lookout and its outbuildings, examined the weather stalled on the Cascade crest to the west, then returned to my bike for an unpleasant, hand-freezing descent.

Odell Butte is a near-perfect cone near Crescent Lake. I had been hoping to ride the road to the Oregon standard lookout and antennas, but the storm arrived in earnest the night before, so I ran it from the car, about 6 miles each way. The snow began as a dusting, which gradually turned into moderate postholing, with a large old drift blocking vehicles at the “road closed to tourists” sign just below the top. I got a brief view of Crescent Lake on the way down, but was mostly in the clouds, with only the nearby rime-covered trees for distraction. I turned up the speed a bit on the final, more runnable road, and enjoyed some time at an actual running pace; it had been too long.

This entry was posted in California, Meta, Oregon, Tourism. Bookmark the permalink.