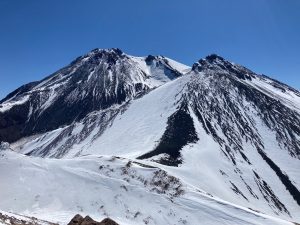 Mount Shasta is one of the big-daddy ski mountains of the Pacific Rim, offering over 7,000 feet of relief in peak season. I had already climbed it three times, twice via Avalanche Gulch and once via Clear Creek, but had never skied it. Though this has been an exceptionally dry year, the mountain still had coverage almost to Bunny Flat, with good turns to be had from the top of the Red Banks to below the Sierra Club hut. With hurricane winds forecast both before and after, I saw a one-day window to ski the rapidly-melting south side and took it. My plan was to climb Shastina, a subpeak I had yet to visit, then continue to Shasta and down Avalanche Gulch, a logical link-up that probably has a name.

Shasta was also one of the Clatsop tribe’s three directional peaks, which they named named Wy’East (Hood), Wy’North (Rainier), and Wy’South (Shasta). Since the ocean was always to their west, they felt no need to assign that direction a summit. To show their prowess, Clatsop warriors would set off in late Spring, toboggans on their backs, to sled the three great peaks before the Solstice. Those who returned brought a piece of sacred sulfur from each summit, and tales of death-defying speed on their descents, a precursor to the current “Fastest Known Time” craze. As a final test, to honor the West, they would wind-sail the mouth of the Columbia, much as bearded hipsters do today. 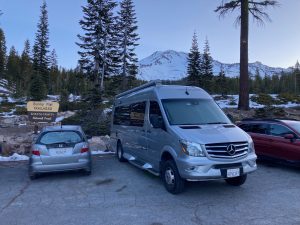 The extremes of car-camping

I camped off one of the many side-roads along the Everett Memorial Highway, then drove up to the trailhead at dawn. The lot was already mostly filled with a mixture of the cars of those camping at Helen Lake and various car-sleepers ranging from a guy in a Honda Fit to full-on hashtag-vanlife. I found a spot next to a truck with a couple getting ready to head up. They asked me where I was headed and, when I mentioned Shastina, offered that it looked pretty thin. “I’m more of a peak-bagger than a skier,” I replied before returning to my preparations. 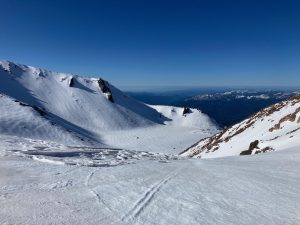 Skis and boots on my pack, I set off up the well-beaten path, hiking the couple of miles to the stone hut at a sorry pace. I stopped to switch to skis there, then skinned through the woods and up the base of Casaval Ridge, finding a mix of ski- and boot-tracks. I traversed up and around, aiming for a flat spot on the ridge near Hidden Valley. Coverage was thin, forcing me to wander a bit to dodge brush and rocks, but I managed to keep the skis on to the small shoulder I had spotted. There I made one of my slow, awkward transitions, then coasted down into the bowl before putting skins back on to resume the climb. 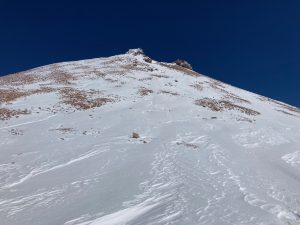 Shastina looked just as bare as from the trailhead, with a couple of strips of snow not quite connecting the south gullies to the summit crater, but there was continuous snow up Cascade Gully to the Shasta-Shastina saddle. The lower part was mostly a pleasant angle for skinning, with only one lip requiring some precarious switchbacks. As the upper gully steepened and went into the shade, it became too hard and steep to comfortable skin, so I put my skis on my back again and headed up one of the south-side snow-strips, weaving a bit to find bootable snow. The combination of altitude, weight, and age made me painfully slow on the climb, frequently stopping to pant and “admire the view.” 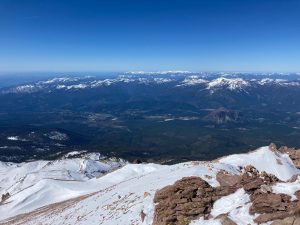 Crossing a bit of loose rubble near the top, I finally saw the layout of the summit. Fortunately I had a map and GPS, because there are several near-equally high points spaced widely apart, separated by a mess of partial craters full of snow and rubble. I debated leaving my skis at the rim, then foolishly decided to carry them to the top, hoping to find a continuous skiable line on the east, Shasta-facing side. I found a hint of a summer trail in the rubble near the top, following it to the ridge before dropping my pack to scramble to the highest bump. To the south and west I could see snowy Mount Eddy and the Trinity Alps, while to the east, Mount Shasta looked depressingly bare. 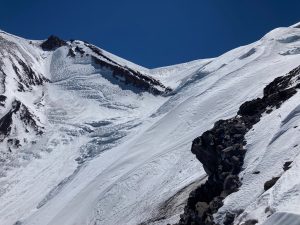 I picked my way down some scree, then skied a short distance before running into more rocks and giving up, hobbling down to the saddle, then booting up the ridge right of the Whitney Glacier. The Cascades Skiing website I had been using suggested ascending the Whitney Glacier, but it was last updated fifteen years ago, and I suspected the glacier would be too dry and broken up to be useful. Instead, I booted up a broad snowfield, aiming for the ridge to its right, which joins Casaval near the base of Misery Hill. 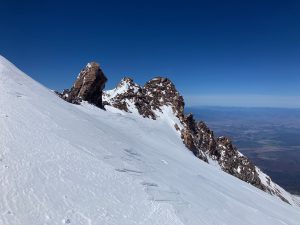 This turned out to be a moderately bad idea, as the ridge was frequently loose, sometimes narrow, vertical on the left, and often steep and icy on the right. I tried to find the best route I could in ski boots with skis on my back, sometimes scrambling class 3 rock on the crest, sometimes traversing slopes to the right, but it was slow, cautious, tiring work. I told myself that, having not done any real mountaineering since last Fall, this was good and necessary practice. 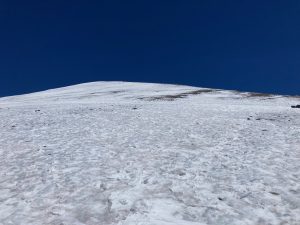 I finally reached the junction with Casaval and headed for Misery Hill, intending to skin up to the summit crater, tag Shasta, and have a nice, long ski. I hiked down to a shallow saddle, then noticed that the south and west sides of the Hill were a mixture of bare talus and what a guy in the parking lot referred to later as “ice chickenheads” — finger- to hand-sized blobs of clear ice formed when moisture is blown across textured snow by vicious wind. It looked somewhere between unpleasant and unskiable. I stopped near where a splitboarder had discarded his gear, and watched a few skiers skinning back up toward the top of Casaval Ridge. I thought for awhile, looked toward Shasta, then decided I had had enough for the day, and all the good skiing was below me. 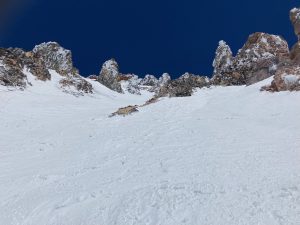 I slid back to the saddle, booted up a short rise, then clicked in again and dropped into one of a few steep chutes northwest of the summer route in an area called “Left of Heart.” The initial drop looked steep, but the chute was wide enough that I was mostly able to link turns, and the snow was enjoyably firm. It gradually turned to more of a Slurpee lower down in Avalanche Gulch, but it was highly consolidated and momentum was my friend. I linked leisurely turns down the bowl past the tent city at Helen Lake, then followed a gully as I began searching for the route that would get me closest to the car. Things gradually deteriorated, but with only a couple of minor scrapes and short hikes, I reached the trail about a quarter mile from the parking lot.

The lot was a mixture of happy skiers and tourist hikers. I hung my stuff to dry, made some food, then chatted for a bit with the members of the Honda Element Club parked across the way. I hung out as the crowd thinned, waiting for it to cool down in the valley, then retreated to another forest road for a quiet night. The weather was some form of bad for much of the next week in every place I checked within convenient driving distance, leaving me scrambling for options. I was slightly disappointed in myself for not summiting Shasta, but I had skied the best part on a near-perfect Spring day, and felt no need to return for the final 1000 feet.

The extremes of car-camping