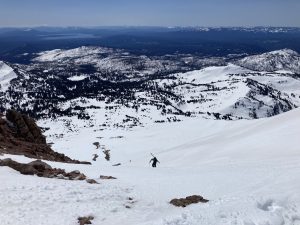 Lassen Peak is the southernmost Cascades volcano, and a fairly active one, having erupted as recently as 1921 and still featuring sulphur vents and boiling mudpits on its flanks. It took me a couple tries to summit, thanks to the whole mountain being closed for trailwork, but when dry it is an easy trail hike from the road. However I had yet to ski it, and with the road still gated to cars and the High Sierra transitioning to summer, now seemed like a good time. Fortunately I had the necessary gear to make it enjoyable — a bike and skis — and David made do with a bike and splitboard. I am old enough to consider snowboarding contrived and impractical, so splitboarding a mountain seems like rock climbing in roller skates: it can be done, but why?

In any case, the parking lot was much busier than it had been during the week, though still more than half empty, and there were several other people with bikes and skis. It was not a long day, and the snow had to soften, so we were in no hurry to get started. We passed one young woman on an old beater bike, stopped to adjust her skis, and I noted how they were attached. They were held on opposite sides of the seatpost, with one ski strap suspending them from the saddle rails, a second holding an end to the top tube, and an optional bungee cord securing them to the rack. I had seen pictures of people carrying skis this way, so it was good to finally learn how it was done. 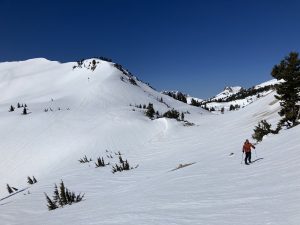 Continuing up the road, we found several other bikes at the end of the plowed section ahead of us. We switched to ski mode, then started skinning toward the peak, taking a line between Helen Lake and the road. There was no single established skin track, so I chose what seemed like a reasonable line, passing near what I thought was the summer trailhead. The trail follows the south ridge, largely wind-blasted and currently windy, so I continued around to the more sheltered southeast face, figuring this would be both more sheltered and softer. 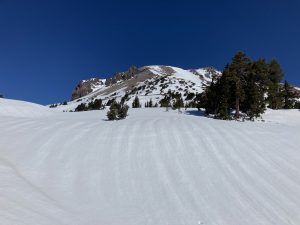 While it was more sheltered than the ridge, the snow was still surprisingly hard. I managed to keep side-hilling into the bowl, but David, on his ridiculous splitboard, was having more trouble. First, because the halves of a splitboard are shorter than skis, he had less surface area to grip the snow. Second, because he had comfortable, squishy snowboard boots, he lacked ankle support to edge into the hill. I tried to choose an easier line for his sake for awhile, but then gave up and followed some other skiers ahead and above in the bowl. I figured he could fend for himself, and I would take an extra lap to check in on his progress.

The skinning became a bit desperate as the bowl’s angle increased. The skiers ahead of me mostly had ski crampons or actual crampons, but I had brought neither. When the skinning became a bit too dicey, I traversed over to the rocks on the right, strapped my skis to my pack, and booted up a mix of volcanic rubble and softer snow on its margin. Farther up, the lensing effect of the chute had softened the center snow, so I followed that, passing a couple people near the top. 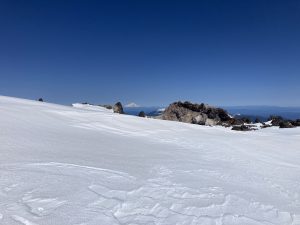 Shasta in the distance

I had hoped to get out of the upslope wind on the summit plateau, but was immediately hit with a contradictory wind from the west. Still, it was sunny and I had a down jacket, so I was comfortable enough to enjoy the view for awhile. The various summit knobs were, predictably after the previous day’s storm, covered in rime feathers, while Shasta looked invitingly white far to the north. The two other guys on the summit worked at least seasonally for nearby Plumas National Forest, and we talked a bit about the recovery from the Dixie Fire. 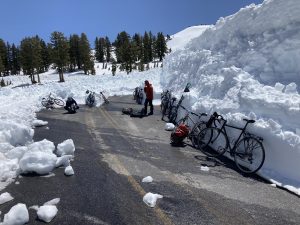 As another couple of skiers arrived, I decided to down to check on David. The top of the mountain was still a bit crusty, but the skiing soon improved in the bowl. I did not see him on the snow, so I put my skins back on at the base of the steeper part and headed back. Partway up, I switched to booting and found it much more efficient than zig-zagging on skis, passing the young woman we had met on her bike just at the top. I found David had arrived several minutes earlier, having scrambled up the rock rib right of the bowl, and already tagged the summit.

We hung out some more, then headed down in more favorable skiing conditions. It turns out that splitboards are also not great at going downhill, at least if one has to side-hill, so while I took a fun, straight line in the best snow, David had to begin traversing high on spiky crust. We had a bit of trouble dodging bare patches at the base of the south ridge, but mostly had an easy glide back to the bikes. There were now ten or so bikes locked to trees or leaned against snowbanks, almost a “crowd.” If only more of our National Parks were open to cars for less of the year…

Shasta in the distance