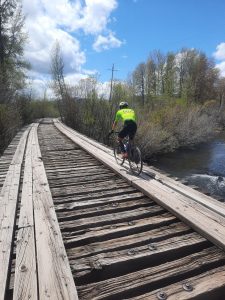 About as close as I get to stunt riding

[This low-photo entry brought to you by Error 3145 and Apple’s garbage software quality. Photos will probably randomly start working again tomorrow or next week. — ed.]

Lake Almanor is one of the numerous large lakes in this part of California. Though it has an earthen dam at its southern end, it seems larger than can be explained by this modest barrier, so I suspect it was once a smaller, natural version of its current self. Fittingly for California, I first became aware of Almanor thanks to a natural disaster, the Dixie Fire, which torched almost a million acres to its south and west to become one of the two largest fires in the state’s history. (The other, the August Complex, occurred the year before.) I had noted its cycling potential, but planned to skip it in favor of more interesting plans.

However nature had other ideas. We woke in the Lassen parking lot to lowering clouds, so after breakfast we waited around to see whether things would improve. They did not, and a mild but steady drizzle began. I have skied in the rain once before and, it being a Saturday, a handful of hardy (in the Dave Barry sense) others were heading for Brokeoff and Lassen despite the weather, but David and I both had bikes, cars, and common sense, so after hanging out in the car for awhile, we drove down to Almanor to ride around the lake.

Parking at the intersection of Highways 36 and 89, we immediately left the current roads to follow old 89, a pleasant mix of dirt and decaying pavement paralleling the current road. Soon after it faded under the new 89, we found another dirt forest road paralleling the pavement, which we followed to the paved access road to Butt Valley Reservoir (what’s with these names?). This road climbed gradually through unburnt woods, then made a steep, winding descent to the lake. 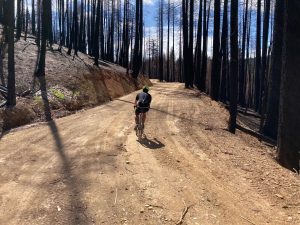 The road soon turned to dirt, and we were grateful that it was freshly-graded and we were there in the spring. This part of the state is largely volcanic, so the soil turns to a deep powder that completely coats every surface of anything that passes. We wound around Butt Lake, then wound around to the next valley, riding through rolling terrain as we entered the Dixie Fire zone. This was one of the largest fires in California history, and almost a year later, the devastation was running its course but slowly. Other than a few ferns, the forest seemed free of flora and fauna alike. The burned trees had not begun falling, and there had not been any large mudslides, but it is only a matter of time before both happen. 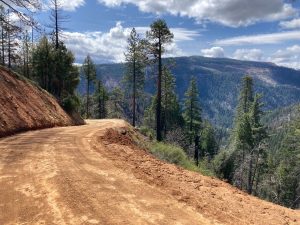 Down into the canyon

Even in its current state it was magnificent riding, with deep valleys opening up to views of distant snow-covered peaks to the west. With one final 600-foot descent, we reached our lowpoint at Seneca, a tiny former enclave of vacation homes and/or secessionists. Nothing was left now save stone chimneys, twisted metal propane tanks, and a dog barking incessantly somewhere off in the woods. We crossed the bridge, then climbed a steady 1400 feet back to Lake Almanor at its southern end, reaching pavement a short distance before the highway, which we crossed to continue along the quiet east-side road.

Stopping at a gas station so David could refuel on junk food, I got a chance to observe the locals for a bit. Lake Almanor may have been a prime vacation spot in the 1950s, and a logging hub in the 1850s, but its glory seems at an ebb, and it is the off-season anyways. A couple guys stopped by for soda and barbecue and said “hi” in a friendly way, and another two pulled up in an old lifted pickup, depositing a full six-pack of empty Smirnoff Ice bottles in the trash. The place felt back-woods, but not uncomfortable. 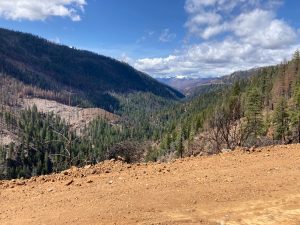 We continued to follow the lake shore counterclockwise, turning onto a lesser paved road, passing a ridiculous rich-person enclave with a Tudor-style stone guardhouse, then turned off on an abandoned railroad grade to follow the shore more closely back to the causeway east of Chester. This section was quiet, but the surface was unpleasant sharp gravel left over from the track bed. Thanks to Strava, David found another detour near town, taking us around the south side and ending in a mix of burnt woods, stagnant water, and ATV trails. With a final zig-zag to find a bridge crossing an input to Lake Almanor, we returned to the cars for a pleasant, leisurely 45-mile ride.

Lassen’s summit remained hidden in clouds, but David took off to tag Brokeoff, a county highpoint, while I went into town to resupply. The Forest Service office had an unguarded garden hose, where I was able to refill my water and wash my bike. An armed and armored ranger stopped by, but he did not object to my minor misuse of government property. I reached the library as it closed, but the librarian told me I was welcome to use the WiFi (unlike in Susanville, where it was closed because Someone did Something Bad). The old building even had some cool folding desks on its porch, where I sat to catch up with the world before returning to Lassen to give the main peak another shot.