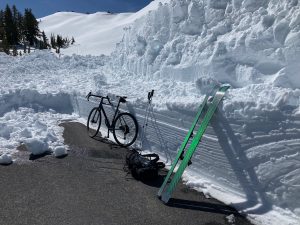 After a period of indecision, I belatedly set out for a bit of “adventure,” or at least something focused more on the activity itself than on gaining fitness. Lassen Park was in that happy transitional state of plowed but gated roads, so I headed there first, arriving late to a surprisingly-empty parking lot. Not having the energy to pack or plan the night before, or the will to deal with a cold start, I finally started sometime after 8:00. 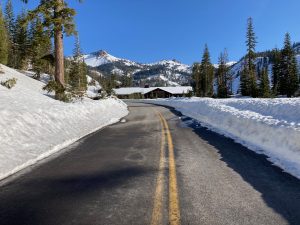 This was my first experiment cycling with skis on my back, but it was little worse than carrying a heavy pack, except that the tails caught occasionally mounting and dismounting. I slowly spun past the sulfurous hot springs, then continued to the northeast side of Diamond Peak, my first goal, where I saw some tracks leading up and down the short 500-foot slope to its summit ridge. I followed a skin track some of the time, made my own for the rest, and reached the base of the summit pinnacle without difficulty. I did feel slow, however: while I know from my running and cycling times that I am reasonably fit, I still found myself stopping to gasp for breath skinning uphill at a plodding pace. This is not unexpected, but it is always disappointing to be reminded that I am far from being able to race on skis. 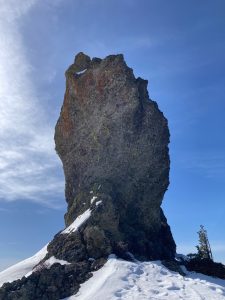 Diamond’s summit is an undulating choss-ridge with highpoints on either end. I changed into running shoes, then went to the middle first, where I had cell service, and downloaded Bob’s and others’ trip reports to see which was the highest (an indication of my level of preparedness). Thankfully people seem to agree that the north pinnacle is the highest, because the south one is a large balanced rock that appears to overhang on all sides. I made the easy scramble in my worn-out shoes, then returned to my skis for a five-minute glide to the road. As usual, I had spent more time getting into and out of ski boots than actually sliding downhill. 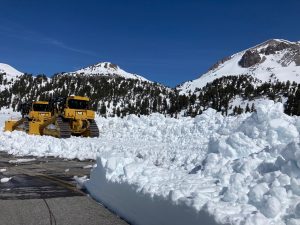 Taking the day off

Back on the bike, I continued up the road to where the plows had given up near Helen Lake, then leaned my bike against the snowbank and locked it. I suppose I was blocking further plowing, but it was already close to 11:00 and the plows were still parked, so I assumed they had the day off. There had been a couple in a van camped at the visitor center, and I found their bikes a short distance onward, stashed behind some trees. They were of course headed for Lassen, but I was interested in two nearby minor summits, Helen and Bumpass. 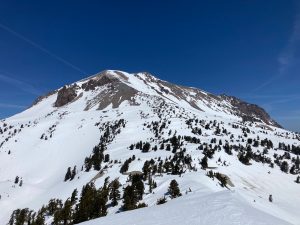 I had seen “Bumpass Hell” on maps during previous visits to Lassen, but had not bothered to explore. The “Hell” part is due to a volcanic feature, in this case some boiling mud-pools, in keeping with the geographic naming convention that has given us the Devil’s Tower, Postpile, and Corral. The “Bumpass” part remains an amusing mystery, perhaps inspired by a rough road through the park. I find it amusing, though, and see a missed opportunity in not naming nearby Bumpass and Brokeoff Mountains “Bump-ass Hill” and “Broke-ass Hill.” 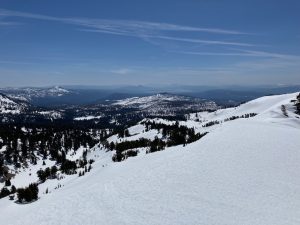 In any case, I started up Helen first, finding it an easy skin from the lake. From the summit, I had a clear view of Lassen’s south side, including the largely-dry trail and more skiable southeast and southwest slopes. I saw the couple nearing the summit plateau, specks on skis sticking to the snow. I found some obnoxious brush and cliffs on the direct line to Bumpass, forcing me down and east, then back west to ascent its west ridge to the peak. I took a similarly suboptimal line back to the road, side-hilling across a couple of drainages before finally booting up to the Bumpass Hell parking lot. 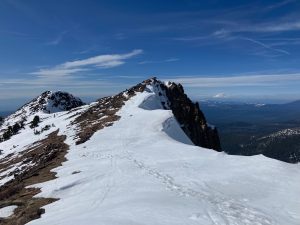 One clunky road-walk later I was back at my bike, talking to the couple as we all put away our ski gear and prepared to ride. They had been traveling seasonally for a few years, though oddly enough in the winter, and were headed up the Cascades to ski various volcanoes. They were of a different dirtbag economic stratum than Yours Truly, but we got along well enough. Back at the car, I had a late lunch, then decided to tag nearby Brokeoff Mountain to fill the rest of the afternoon. The sun doesn’t set until 8:00, so while the skiing would not be great, I had a lot of time to kill.

I entered the woods near the entrance station, then wandered up the broad drainage toward its headwall, where all routes converge on the summer trail. Others had apparently done the same, and I found bits of up- and down-tracks throughout. I followed an intermittent and bad skin-track up the headwall, then meandered up the ridge, dodging rocks and brush. Once I finally broke out on the broad south face, it was an easy skin and hike to the summit, the east-most of three peaks. Brokeoff offers excellent views of Lassen and Shasta, the latter’s isolation and snowpack making particularly impressive.

I found a few good turns on Brokeoff’s south face, but the snow was wet and sticky, and all too soon I had to cut left to cross the ridge back to my drainage. From there it was mostly side-hilling, skating, and careful dodging between trees back to the road, then a short walk to the parking lot. Other than the few turns on Diamond, there was very little real skiing in my day, but my purpose was to tag minor peaks, not big lines, so that was fine. Day complete, I made myself a dinner of odds and ends, then napped, read, and prepared my pack for what I thought would be another day of bike ‘n’ ski.

One of many transitions

Taking the day off