What to do around Susanville 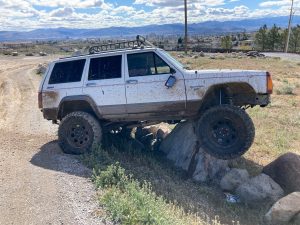 I have passed through Susanville a number of times commuting between the Sierra and points north, and my impression has been: (1) at least it has a Walmart, and (2) keep going for cheaper gas. For reasons too mundane and pathetic to detail, I found myself spending a few days nearby recently. It remains a desert redneck hub, too hot in the summer, too cold in the winter, and fertile ground for “F*ck B*den — not my president” signs to grow. But it also has a wealth of good cycling in the shoulder season, from paved backroads, to dirt forest roads, to a couple of long rail trails. I don’t think I could live here, but like many parts of drive-through country, it has redeeming features if you take the time to look. 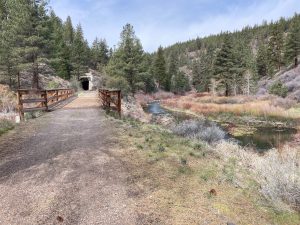 The Bizz Johnson trail is a 25-mile rail trail following the Susan River west from Susanville, with two short tunnels and many bridges. Parts were destroyed by recent fires and floods, but the first 7.5 miles are undamaged, and the rest is being repaired. I was in town too early for the western parts, which are still a mixture of snow and mud, but was able to follow parallel forest roads to the end at Mason Station, then loop back on Highway 36. Once the country to the west melts out, there are apparently many other roads and trails that can be combined with the Bizz Johnson to make long loops. But as in Oregon, there is a strong rain shadow despite a lack of notable mountains, so peaks above 7000 feet east of town were dry even as forest to the west had patchy snow at 5500 feet. 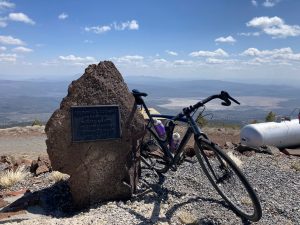 There are no fewer than four mountains named Fredonyer in the area, as well as some other features. All are named for Atlas Fredonyer, an early settler with an unsettling biography. This is the highest one, with a lookout and antenna nest on top, accessed by a rough dirt road off Highway 139 between Susanville and Eagle Lake. The road is hard to spot, an unsigned turn on the long descent to the lake. Another, more obvious road apparently also leads to the peak, but crosses aggressive private property near the bottom. Riding the peak from camp north of town, it came out to just under fifty miles round-trip. Though the day was fairly pleasant lower down, the summit was uncomfortably windy, leaving me with cold, stiff hands for the rough descent and much of the paved ride back south. 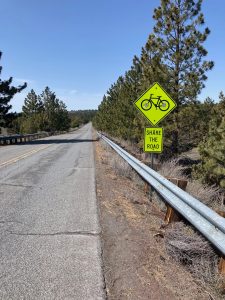 For some reason, this region features many large lakes. The most famous and arguably scenic is Tahoe, but others include Pyramid, Honey, Alkai, Goose, and Eagle. From Susanville, there is a 60-mile paved loop around Eagle Lake via Highway 139 to its east and Eagle Lake Road (A1) to its west. Even the highway part of this loop is not too busy, and the Eagle Lake Road is almost deserted before the campground along the lake are open for the summer. This makes for a wonderful, quiet, rolling long ride, only slightly spoiled by the pavement cracks on A1, causing vicious jolts every few seconds for what seems like hours. 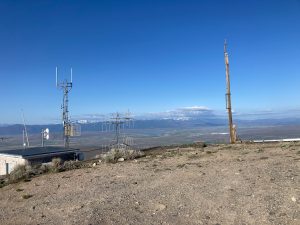 This is another peak with an antenna nest, and therefore a road to the top, climbing about 2000 feet in seven miles at a steady grade. The upper parts can be frustratingly rock and loose, but not nearly as bad as the Fredonyer road. This would be a long ride from town, but it was a good short objective from the highway, suitable for a day with miles to travel and errands to run. Not only is it an efficient workout, but Shaffer has 2000 feet of prominence, making it worth multiple Peakbagger Points.