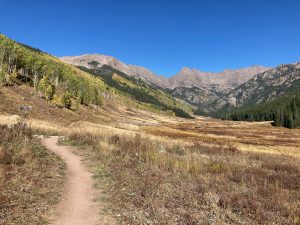 Powell and Peak C from return

Eagles Nest and Powell, also known as Peaks A and B, are the northernmost of the Gore Range’s “letter peaks.” To their south stretches Ripsaw Ridge, comprised of Peaks C through H. I had traversed these peaks back in 2012, skipping H because its summit is indistinct from below, but ran out of energy to continue to B and A. Looking at C from Powell, it looks like it might not have been possible to continue the traverse. Powell is the range highpoint, making it an appealing enough target to brave the horrors of Vail on my way south. 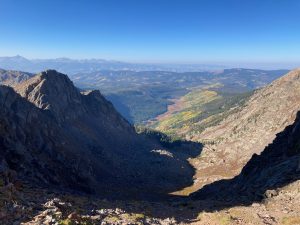 I drove the long, dusty road to Piney Lake, which felt much worse than I remembered, reaching the parking area outside the ranch around dusk. All of the designated camp spots along the way were occupied, but no one seemed to mind my sleeping in the car at the trailhead. I was awakened around 4:30 when two young guys pulled in next to me and packed for what I guessed (correctly) to be a traverse of Ripsaw Ridge. I found their conversation insufferably “bro-ish,” but that probably says more about me and the early hour than about them. I tried to get a bit more sleep, then started at a civilized time when I would not need a headlamp. 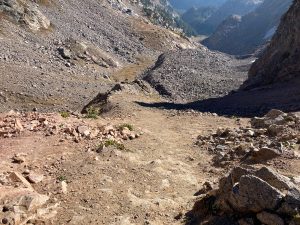 Bad side of Kneeknocker Pass

I passed a few photographers on the trail, likely guests of the ranch, photographing a few moose hanging out in the willows, and was passed by a couple of young women out for their morning jogs. Farther up I met a bow hunter, out on the last weekend of the season and unlikely to have much luck in such a high-traffic area. I easily found the cairned trail to Kneeknocker Pass, and turned steeply uphill on a surprisingly nice trail. The sun was finally hitting the ranch and meadows, but I remained in Ripsaw Ridge’s shade. Kneeknocker Pass was supposed to be a wretched talus-slog, but I found a decent path on the left side almost to the top. 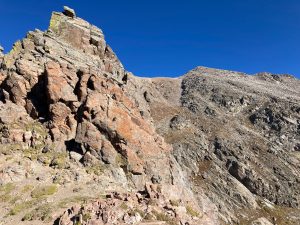 There are two ways to Powell’s summit from the pass: follow the ridge, or drop down the other side a little ways to reach the broad south slope. The other side of the pass was hardpack and ball bearings that looked somewhere between miserable and dangerous, so I opted for the ridge. After some traversing to the left, passing the occasional cairn, I returned to the right side, where I easily gained elevation on some nice slabs. The ridge eventually deposited me on Powell’s summit plateau, from which I made my way to the highest of several large talus mounds. The air was clear, and I had unobstructed views of Holy Cross and the Sawatch to the southwest. Closer, I could see the various side-ridges east of the Gore crest that hold most of the remaining letter peaks. There are also a couple of colorful lakes east of Ripsaw, fed by small patches of ice. 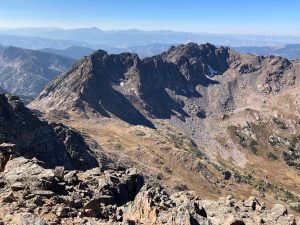 The ridge to Eagles Nest looked long and tricky, and I knew nothing about it, but I had nothing better to do with my day, so I took off across the summit plateau to its start. I found generally smooth sailing on the first part, staying near the crest or following ledge systems to the west. Things turned much trickier near the saddle, where there are many small gendarmes and both sides of the ridge seem steep. At the lowest notch, I tried a possible ramp on the west side, chickened out at a dihedral that felt too steep to be safe, then retreated to the crest. Picking my way down the other side, I eventually found my way down a steep gully until I could cross the next rib and reclimb to the saddle. This felt like about low fifth class, harder than I had expected but not unreasonable. 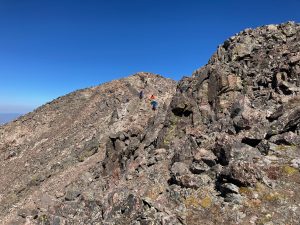 Beyond this, there were more towers to go over and around, but the climbing generally became a bit easier. I even spotted a few cairns, suggesting that I was on the correct version of some route. Eventually the gendarmes ceased and the ridge began a steady climb toward the summit. Looking ahead, I was surprised to see five brightly-colored people in helmets. They turned out to be four guys and a woman, who had started early that morning from the north end and had a car shuttle back at Piney Lake. After meeting no one on the higher and much easier Powell, I was surprised to see someone on this more difficult and obscure route. They informed me that it is in Roach’s book, and that the ridge is supposedly easier if you drop farther off the west side. 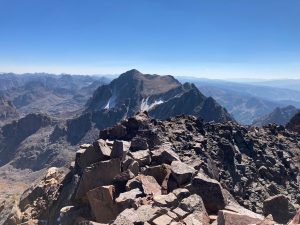 I continued to Eagles Nest, where I paused to have a snack and check out the view of the small glaciers north of Powell, and the oddly-perched Dora Lake. I then retraced my route along the ridge, planning to drop west and cross the col at the head of Cataract Creek and rejoin the Kneeknocker Pass trail. I had spotted some gullies that did not cliff out as I traversed, and figured I would choose one of them. I ran into the party of five again, passing them as they began their descending traverse, then made my way to the valley bottom without much trouble. I did not say anything, but given their pace, I saw headlamp time in their future. 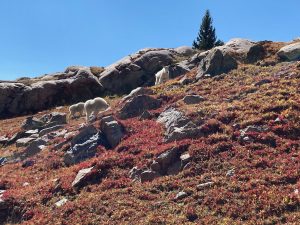 The col worked well, and I was surprised not to find a use trail, since it seems like a useful connector. Stopping near the trail on the other side to get some water, I watched a family of mountain goats graze watchfully not too far away. A few minutes down the trail, I met four inexperienced-seeming people and an unleashed dog aiming to climb Powell. I gave them what route advice I could, told them about the goats, and suggested they leash their dog. They happily ignored me and continued, but I did not hear an altercation. While there were not many peak-baggers out, there were tons of leaf-peepers on the lower trail. I dodged them as I jogged and hiked my way back to the overflowing parking lot. I was hungry, and would normally have taken my time over a meal, but the crowds were too much. I drove back toward Vail, then up a less-traveled side-road, looking for a nice spot to camp. The few flat pullouts were taken, so I finally settled for a flat-ish wide spot in the road. Not ideal, but good enough.

Bad side of Kneeknocker Pass

Powell and Peak C from return