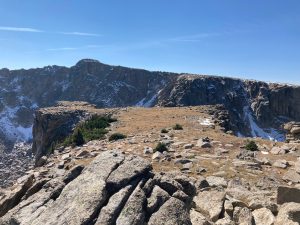 Rocky Mountain National Park is a casualty of greater Denver’s unchecked growth. It was already a bit of a circus when I visited to climb Longs in 2009, and has only gotten worse since. Recently the Park has instituted a “timed entry permit” system, in which one must have one of a limited number of permits to enter the park at a particular place in each two-hour window of the normal day. These permits are “free” through recreation.gov (there is some kind of “convenience fee,” of course), and both the far-in-advance and day-before ones seem to go quickly. Timed entry for the east-side entrances starts at 5:00 AM, and somewhat later for the less-popular west-side ones.

I have long wanted to check out some east-side routes for the next edition of my book, including the Cables and Kiener’s routes on Longs, the 5.6 route on Spearhead, and the long traverse of Glacier Gorge called “A Walk in the Park.” But between the crowds, entry permits, and increasing difficulty of camping in that part of the Front Range, I probably never will. It is sad that these potentially “classic” scrambles have been ruined by unchecked population growth, but there you have it. If I am not willing to put up with the nonsense required to reach them, I cannot recommend them to others. Given that Yosemite seems to be headed toward similar or even worse crowding and restrictions, I may remove Matthes Crest and Cathedral from the next edition. 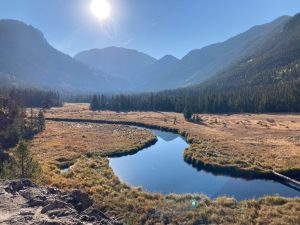 With the east side of the Park off limits, I decided to check out “Aiguille du Fleur,” a minor tower with a scramble route that I had read about on Steph Abegg’s site. From my camp in the burned-out forest west of Grand Lake, I drove over to the East Inlet trailhead, where I was met with timed entry signs. I had not expected them at a trailhead with no entry booth on this side of the park, and did not know what to do. I had cell service, but there were no reservable permits available online, and the explanation of when one needed a permit was not at all clear. I eventually asked a local guy what the deal was, and he said that, since I had arrived at the parking lot before timed entries started, I was fine. I have no idea if or how they enforce the system at this trailhead. 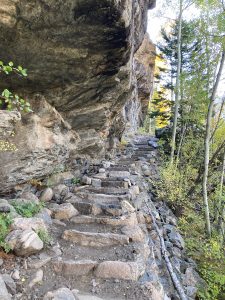 I put my annual pass on the dashboard just in case, then started off up the trail. Once past some falls, it stays flat for awhile, crossing some meadows with a meandering, barely-moving creek. The trail then climbs the valley’s north wall to get up a headwall, with impressive blasting in some sections. Along the way there are named, designated camping spots — apparently camping, too, requires reservations. Above the headwall, the valley climbs past a series of lakes, from Lone Pine Lake all the way to Fifth Lake, at the base of Isolation Peak. 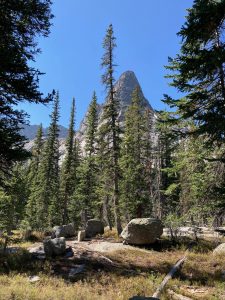 I went to the third lake’s outlet, then left the fading trail to cross the small creek and bash south through the woods. Expecting a climbers’ trail here, I was disappointed to find only bits of game path, but the rough part was short, and travel became easier as the side-valley flattened. As the Aiguille came into clear view, I skirted around its slabby apron, taking a gully toward the head of the valley before cutting back toward its sheer east face. Here I could see the obvious ledge leading to the base of the north ridge route, supposedly 5.6. I was slightly tempted to try it, but I was worried about north-facing snow on potentially slabby terrain, and not feeling all that ambitious. Instead I stuck to my initial plan to climb the easier south ridge. If I had extra energy after that, I could continue to Fleur de Lis Peak, then follow the plateau west before dropping to the trail lower down. 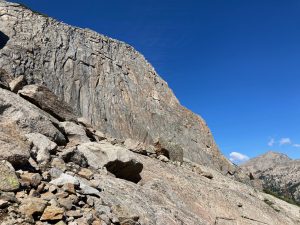 After an easy gully, I found a short tricky section dealing with a chockstone in the notch between the Aiguille and the ridge to the Peak. Once past this, I found more low-fifth scrambling meandering up and right, which eventually eased off to a hike to the long, flat summit plateau. I had felt off my game on the scramble, which was supposed to be only a bit of 5.4. I walked over to the highpoint, a jumble of boulders on the other side, where I found a cairn and a couple of slings. The views into the valley, and of the cirques to the south, were striking, but other than Isolation, most of the surrounding peaks are just bumps on a high plateau.

Without much energy, I decided to return the way I had come. Back at the other side of the summit plateau, I followed a ramp toward the other side of the notch, and realized I had made my life much harder than necessary on the way up. Other than a step-around and a couple of moves, this way out of the notch would have been a simple walk. I did not find a climbers’ trail on the way down, but managed to follow slightly better game paths. The trail was too rocky to be much fun to run, but I jogged the smoother sections. As I got within a mile or so of the trailhead, jogging again became nearly impossible due to crowds of meandering tourists, including what looked like a wedding party. I ate my meal in the completely full parking lot, then took off south and west toward less crowded places.

One response to “Aiguille du Fleur”