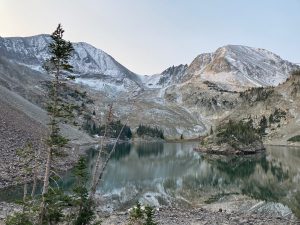 Richthofen is the tallest of a horseshoe of choss-peaks encircling Lake Agnes, south of Highway 14 in the Never Summer Range. Any reasonable access requires entering the loathsome and poorly-named Colorado State Forest State Park, with its arbitrary fees. Fortunately I found a fun workaround: park at Cameron Pass and bike the Michigan Ditch road. Technically you are supposed to pay $4.00 for the privilege of riding on the maintenance road, but no one was patrolling it, and the fee seemed absurd for the absolutely nothing the Park does. The road is there to maintain a canal, one of several, that drags water from Michigan Lakes across the Continental Divide to serve Fort Collins, so the water company keeps it in good shape. The fact that it parallels a canal also means that it is nearly flat, gaining only 200 feet in 6-7 miles. 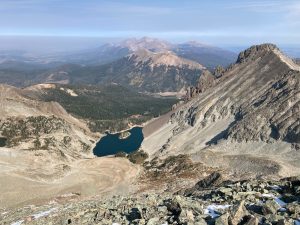 I took my time getting started, and was glad to have worn my down jacket, despite which my hands and feet were cold on the shady, fast ride. The road degrades somewhat past Michigan Creek, where it parallels an old wooden pipe made of staves like like a several-mile-long barrel. I locked my bike to a tree in this section, then continued on foot, waiting for my extremities to warm up. I soon joined the well-used trail to the lake, which is apparently popular with fishermen. I saw a couple of them standing around in the cold as I reached the end of the official trail and continued along a clear use trail through the talus on the left side of the lake. From there I followed cairns and faint bits of trail along a stream, then across a mix of slabs, grass, and talus toward the Richthofen-Mahler saddle. The upper part of this was quite unpleasant, a pile of loose talus covered in snow on the north-facing slope. 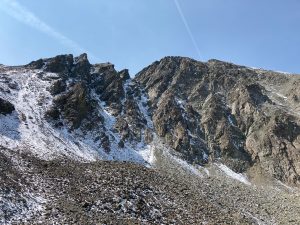 Richthofen itself would be a short day, so I planned to add on neighboring Mahler and possibly continue to Static and Nohku Crags, a notoriously chossy fourth class feature from which I could descend a gully to near my bike. However Mahler proved more of a challenge than I anticipated. I had seen several deep gashes in its west ridge from the approach, and optimistically assumed that the cliffy ridge would be gentler on the other side, allowing me to easily bypass them. Alas this was not the case: deep, steep-sided gullies extended down from the gaps, forcing one to stay close to the crest. That, combined with the fresh snow and the region’s typical chossy rock, made this fourth class scramble quite engaging. Finally reaching the summit, I saw that it would have been far easier, though miserable and chossy, to come up the north slope. 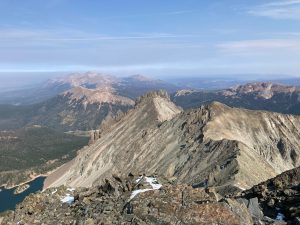 Static and Nohku from Richthofen

After a careful scramble back to the saddle, I started up the slope to Richthofen. I found multiple faint trails, either animal or human, mostly too steep and loose to be useful on the way up. I fought the loose talus for awhile, then found a pleasant slabby rib I could follow to near the summit ridge. A few false summits created more work than I had anticipated on the way to the top, as did the lingering snow. I found a register with a couple of unexpected but familiar names, added my own, and stared at Static and Nohku Crags for a minute. Getting to Static looked easy, and the Crags looked like something I could probably figure out, but I decided I had had enough for the day. I picked my way back to the saddle, suffered down the talus to the lake, then recovered with a pleasant slightly-downhill bike to the car. Needing fresh food and better rock, I drove down to Granby, then found some National Forest to camp outside the dreaded Rocky Mountain National Park.

Nohku and Static from Mahler

Static and Nohku from Richthofen

Choss to the south