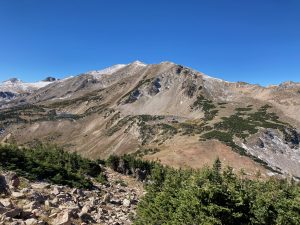 I had more plans up north, and a passing front failed to drop enough snow to shut down the “summer” climbing season. However, at the equinox each day was noticeably shorter than the last, and the low northern sun took most of the morning to generate much warmth. I started out to do another Turiano peak, but was miserable and cold on my bike even after 9:00 AM. When two local hunters in an old lifted truck warned me of “lots of griz” in the valley ahead, I decided I had had enough, and was unlikely to accomplish more at these latitudes. I returned to the car and spent the rest of the day migrating south, following the Rockies’ best season, after the thunderstorms and mosquitoes, but before the cold and snow. 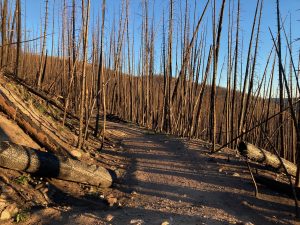 The Medicine Bow Mountains northwest of Denver are culturally part of Wyoming, saved from Front Range tourists by a lack of 14ers, but still significantly warmer than actual Wyoming. While access is made annoyingly pricier by Colorado State Forest State Park on the west, the range is National Forest to the east. I have driven by these mountains before, but never stopped to explore them. Clark is the range highpoint, one of a line of mountains in the Rawah Wilderness north of Cameron Pass. Given the State Park issue, I approached it from the east, via the Blue Lake (sigh…) trail. The first part of the trail is an old roadbed, apparently outside the Wilderness boundary, and I probably could have biked it to save some time. A large recent fire utterly torched the area, leaving a standing forest of dead black sticks. The well-maintained trail finally leaves the burn where the valley it follows turns north toward Blue Lake. Following a track I found online, I left the trail just below the lake to head straight uphill to Hang Lake, then followed a spur to Clark’s northeast ridge. 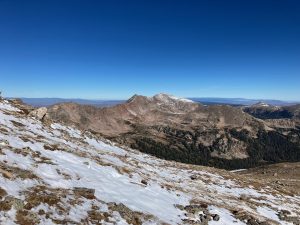 I had been sheltered from the wind up to this point, and was surprised by a blast from the west when I finally reached the crest. Rather than staying on the crest, I tried to shelter by traversing slightly below on the southeast side. This side-hilling on talus, plus patches of fresh snow, made the traverse to the summit much longer than in would have been in better conditions. I glanced at the snow-filled summit windbreak, had a cold snack on the sheltered side of the ridge, then returned the way I had come. 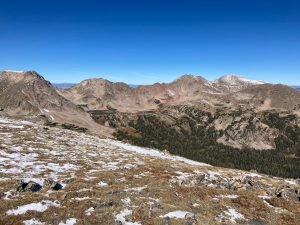 I had initially planned to traverse the ridge north toward Rawah, but that would have been windy and miserable, so I decided instead to fill the day by tagging Cameron, a garbage-peak on the sheltered side of the range. Rather than dropping to Hang Lake, I continued along the ridge, then dropped down loose talus then tundra to the pass above Blue Lake. From there, I found a bit of a trail and some cairns leading up Cameron’s south face. This route was mostly sheltered, but the final walk to the true summit was exposed and cold. The peak has a good view of the lakes below South Rawah to the northwest, and of various reservoirs and burned forest to the south and east. 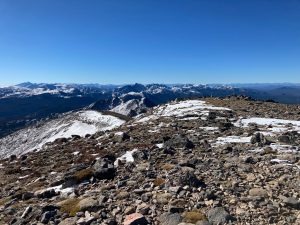 Rather than returning to the pass, I foolishly decided to continue along the ridge toward the trailhead, then drop down to the trail before the burned area. This proved steep and loose, with much deadfall, but I managed to find bits of game trail in places, and eventually stumbled out onto the trail. I should probably have run this section, but was neither in a hurry nor feeling energetic, so I simply walked fast. Looking up from the trail, I saw someone ahead of me, and soon realized it was a hunter carrying the head of the largest bull elk I have ever seen on his back. I congratulated him on his hunt, and we talked a bit. After shooting the buck with an arrow from 25 yards, he had spent the past day and a half carrying it out, taking three trips for the meat and one for the head. I did not count the points, but apparently the antlers had six on one side and seven on the other. 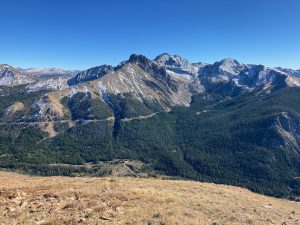 Just a few minutes later, I ran into Ranger Fred, the backcountry ranger for the Rawah Wilderness. He was a young-ish ex-military-looking guy originally from Vail, wearing Hokas instead of the regulation ranger boots. He asked me which car was mine, complimenting me on my stylish windshield shade; apparently he was looking for the owners of the other car in the lot, which had been there for awhile. We spoke for a few minutes, then he continued on, telling me to “keep smiling.”

Back at the car, I took my time making some food, then drove back to Cameron Pass. I took a look at the Michigan Ditch path, which looked like a very rideable way to access Mount Richthofen without paying to park in the State Park, then hiked South and North Diamond Peaks to kill some time. Neither peak is particularly interesting, but they do have great views of Richthofen’s north face, and South Diamond has a mysterious chain anchor above its northeast slope, which is far too gentle for sport climbing. Maybe people use it to practice rappeling? Back at the car, I saw a USFS truck pull up, and met Ranger Fred again. He was impressed that I had the energy to get out for even more peak-bagging in his mountains, and we talked awhile longer before he left to return to his camp. Since the pass itself is littered with “no camping” signs, I drove a few miles east to sleep in a large parking lot, planning to return in the morning.