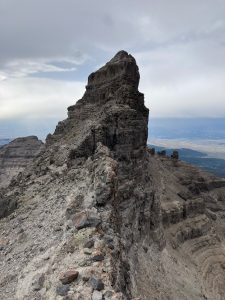 [I am badly behind on writing, hence this catch-up post.]

Despite the blooming, buzzing profusion of information online, I am a firm believer in the value of guidebooks, particularly those expressing an experienced mountaineer’s point of view; Thomas Turiano’s Select Peaks of Greater Yellowstone is one of the best of these. I first discovered it in the Climbers’ Ranch library, where I read it both for pleasure and for ideas for things to do beyond the Tetons. Sadly the book is out of print, and used copies sell for hundreds of dollars. From the thousands of peaks in “Greater Yellowstone,” an area surrounding but mostly outside the National Park, Turiano chooses 107 representatives, and describes their history, geology, and easiest route or routes. This is emphatically a mountaineer’s or peak-bagger’s guide, not a climber’s, as reflected in Turiano’s criteria:

Peaks were selected because they possess a majority of the following characteristics: a commanding view from summit; prominence from at least three directions; high relative elevation; a degree of elegance; distinction from surrounding peaks and environs; and an interesting or unique human or natural history. The overall rock and slope quality of each peak was not a factor in its selection,…

At some point, someone entered the list into the Peakbagger website, and I realized that I had done about thirty of the peaks, some because of the book, but most while pursuing other goals. With some time to kill late in the season, I decided to tag a few more before Greater Yellowstone got too cold and dark.

This is the peak in the northern Gros Ventres whose silhouette looks like a sleeping Indian when viewed from the Tetons to its west, with a large belly, sharp nose, and headdress. Its official name is “Sheep Mountain,” but there are a hundred of those, a dozen of them in Wyoming alone, and it is a non-descriptive and unimaginative name on the level of “Blue Lake.” The summit, the peak of the belly, is an easy walk from Flat Creek behind the Strategic Elk Reserve. I did this on a smoky, windy day, and thus did not get to enjoy the normally stunning morning view of the Tetons. The nose looked like a chossy and possibly challenging scramble from the summit, but it was too windy and cold for me to want to investigate.

The nose and summit

Should see the Tetons

This is one of the easiest peaks in the book, added for its summit views rather than its own character. To make it a bit more of a challenge, and to spare my car some unnecessary suffering, I camped near the highway and rode the ~15 miles of gravel and dirt roads to the trailhead. From there, it was a short hike on a decent use trail to the summit. The views both west and east, to the Tetons and Togwotee Pass, would have been spectacular if not for the smoke. As it was, I could just barely make out the Grand.

This turned out to be the only “legitimate” Turiano peak I managed to do this season. Renee and I had done most of the approach before running out of time, so I knew where to go, and wanted to finish the job. I camped at the same spot, but biked the remaining 4WD road instead of hike/running it. There was some thrashing through downed trees on the way up, but not as much as last time, and I found a pretty good trail climbing out of the head of the basin. Clouds were threatening in all directions, but things were fine overhead, and the peak shielded me from the wind.

The trail ended in the barren upper basin, so I continued over easy tundra toward Ramshorn’s north end. Not remembering the route description too well, I initially tried traversing lower, only to give up on some sketchy, outward-sloping ledges covered in debris that did not seem to be going anywhere useful. I retreated some, then climbed up to the crest, where the rock is, if not better, at least flatter. The best route stays on or near the crest until the final summit knob, with sometimes-wild exposure on the west side.

The summit fin’s north side is vertical, forcing one to traverse left and deal with the stairstep choss, following one ledge until a break allows one to climb to the next one up. The climbing was sort of fun, like a less-solid version of the Crestones’ knobby conglomerate, but still stressful. Above the crux break, I found the ridiculous anchor mentioned by Turiano, some old cord around what looks like a gravel monolith held together by mud. Reaching the north summit requires a bit of careful climbing on crumbly slabs, easier going up than down. The true summit, alas, is separated from the north one by a gap that is just a bit too big to jump, perhaps 15 feet deep, with unpleasant falls on both sides. I carefully climbed into it, not quite trusting the crumbly-looking conglomerate, then had an easier time on the other side. The final knife-edge walk to the highest point would probably have felt trivial on a calm day, but the gusty wind added some spice. I signed one of the scraps of paper counting as a register, then turned to head back with barely a pause.

The weather fortunately held, though there was rain or snow farther north in the Absarokas, as well as in the Winds and Tetons to the south and west. I had to backtrack a couple of times on the ledge-maze part, but eventually managed to find my route of ascent, and other than the summit slabs, everything seemed no harder going down. One thing that was much easier on the return was the trail. It is easy to pick up on top, and while it fades and is confused by game paths lower down, it is still possible to stay on-route, and much better than the cross-country travel in the woods. The mistake I made with Renee was following game trails in the woods to the east; the actual trail stays closer to the creek, crossing small meadows and traveling through more open woods. With easy going on the way out, I was soon on my bike, joyfully coasting down the road to my car.