The Grand at night 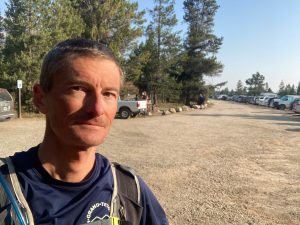 I am used to climbing the Grand in June’s longer days, and have never felt the need to do any but the trail parts in the dark. However the late season and my arbitrary deadline forced me to climb the entire route in the dark. This caused me more trouble than I had expected, as I wasted some time in the boulder-field, and more in the Moraine. I passed my first headlamp folk on the switchbacks below Garnet, and some more around the Caves. The latter nearly caught me thanks to the time I wasted going too high in the Moraine, but I stayed ahead of them, and had little trouble finding the summer route to the Lower Saddle, with its bright hand-line. 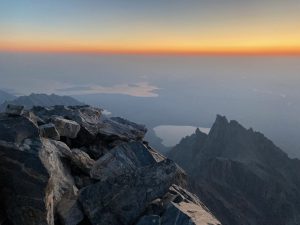 I passed a few guided groups above the saddle, then made my usual mess of the route to the Upper Saddle. I seem to do this slightly differently every time, but I had never done it by headlamp, which further hurt my route-finding. I passed a couple enjoying the first light of dawn at the saddle, then continued up the familiar route on the upper mountain. There was some snow and ice in the chimneys and on a few ledges, but nothing that could not be easily avoided or dealt with. I had debated whether or not to bring my down jacket, and was glad I did, as it allowed me to hang out on the breezy summit for a few minutes, watching the horizon lighten and the lakes come into view below.

I stopped to speak to the couple as we awkwardly climbed past each other in the double chimney. It was her first time in the Tetons, but she seemed to be handling the dark, chilly scramble easily. We exchanged names before we parted, and the guy actually recognized me, or at least my nom de plume. I passed perhaps a dozen more climbers between the upper and lower saddles, wearing the usual varied quality and quantity of gear. I had no need to hurry, merely fast-walking the switchbacks above the Meadows, but put in an effort to jog past the tourists below Garnet, and even tried to finish at a legitimate run. My much-abused body said “no” to that, but I at least managed to walk to the sign by 9:00, for a finishing time of 8 days and 23 hours. After some time to eat and reflect, I headed over to the Ranch to see who was around. There turned out to be more familiar faces than I had expected, so it was well into the afternoon before I got around to taking a shower. It was closing weekend, and I needed some time to recover, so I happily volunteered to spend a few days helping prepare the place for the winter.

Belly crawl on the way down

4 responses to “The Grand at night”