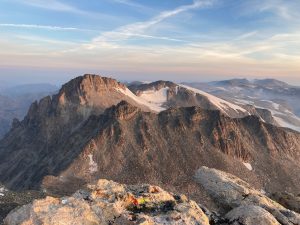 Flagstone to Downs from Bastion

On what was likely to be my last day in the northern Winds, I woke in an unusually positive mood, which persisted as I packed up and climbed the talus-chute to the plateau just south of Rampart’s summit. Fitting that mood, I listened to Glenn Gould playing the Goldberg Variations — the older, manic, live recording, not the tiresome one from 1981. I circled around the back side of Rampart, one of many bumps on the northern Winds’ plateau that rises above 13,000 feet but lacks the prominence to be considered a separate peak. Map in hand, I was able to identify Bastion, the first bump that counted, and was grateful that the highpoint of a jagged ridge to its east was slightly lower. 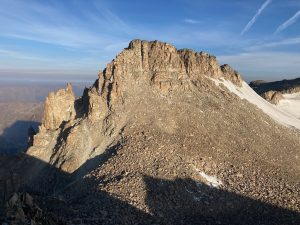 From Bastion, I dropped down a tedious mix of loose talus, rock-hard old snow, and new powder to a plateau, then climbed again to the next ridge north, dropping my pack to tag Flagstone Southeast. Continuing north, I stopped for some water, then put on crampons to climb the small glacier to Flagstone’s northeast shoulder. Again dropping my pack, I made the cold, windy, but easy hike to the summit. Its name seems at least somewhat apt, as the rock is fractured in giant plates, much larger than actual flagstones. 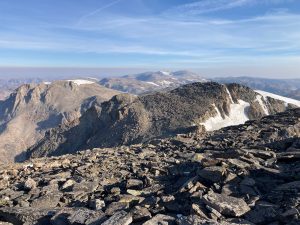 After returning to my pack, I went left around another bump on my way north, then dropped my pack near another flat piece of ice for the longer side-trip to Klondike. I was interested to note the changing form of the glaciers as I headed north. Those in the Gannett area are more typical mountain glaciers, with steep accumulation zones on the high slopes connected to flatter ablation zones below. Farther north, the ice transitions to small, nearly-flat sheets lying on a plain above 12,000 feet, growing and diminishing with very little movement. Perhaps the Winds once supported a single northern icefield with exit glaciers, like the Columbia up in Canada. They currently fail to support these smaller ice sheets, or glaciers in general, and many will likely be gone within my lifetime. 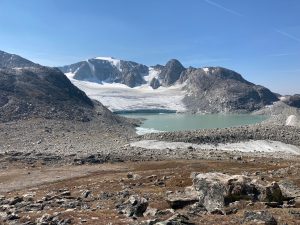 Klondike’s summit used to be the highpoint of one such small ice-cap, but the piles of rock at its corners are now somewhat higher. I tagged a couple of these and walked over the highpoint of the ice, then made the mile-long walk back to my pack. Fortunately the ice-saddle separating the summit from the plateau was fairly flat, because I had not bothered to bring crampons. From there I had several miles’ rolling walk to reach the next peak, Downs South. After some meandering on a plateau, I made a long descent to a saddle near two large lakes, one clear, the other turquoise and filled with icebergs from the glacier on Klondike’s north slope. 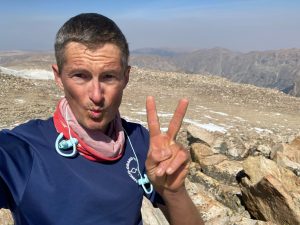 Humping my overnight pack across the tundra was not fun, and the last eight days’ efforts were taking their toll, but at least I had substantially eaten down my load, and had no need to ration what I had left. I crossed the unmemorable South Downs, and promised myself my remaining half a pepperoni after I reached Downs. The summit is one of several humps, unfortunately not the one with the cool southeast-facing icefield, but the one to its east. With the peak-bagging difficulties behind me, I was thinking mostly of how I would return to the trailhead. I had originally plotted out a line north and west from Downs to Hunters Hump, then on from there toward Clear Creek. However it looked like I could reach the high plateau west of the crest more directly via the drainage south of the summit. I therefore dropped my pack (and sausage) at a saddle, boulder-hopped up to the highpoint, and spent a few minutes clowning around on this, my final Wyoming 13er. Granted, I still had to get back to my car, and to climb the Grand Teton the next day for the sake of the speed record, but I was still ridiculously pleased with myself. 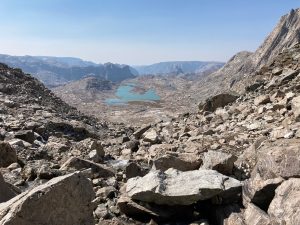 I returned to my pack, chowed down on pepperoni, then got to work. The divide at this point is a high, rolling talus plateau between 12,000 and 13,000 feet, separated from another plateau to the west around 11,000 by cliffs. This lower plateau is in turn separated from the Green River by narrow canyons and more steep drops. Kelsey has little to say about crossing the divide this far north, and even less about routes on the lower plateau (“some places are best kept wild”). Thankfully the USGS has done its job, and we have accurate topo maps of the area, so I was able to piece together a likely route to Faler Lake, from which it is supposedly possible to reach the trail along Clear Creek. 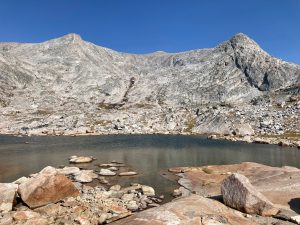 Starting down the valley southwest of Downs, I was struck that it is probably only sometimes a practical way off the high plateau. Late in the season as I was, I was able to descend to one side of the stream, and it is probably covered by snow earlier, but mid-season it is likely a raging torrent blocking the narrow parts of the valley. Emerging to one side of a cascade, I found myself in a rolling landscape reminiscent of the Sierra, with clean granite slabs and faces, lush grass, and many lakes, even the large turquoise one ahead of me unnamed. There were no use trails or footprints, and I only saw a few large animal tracks, either sheep or elk. 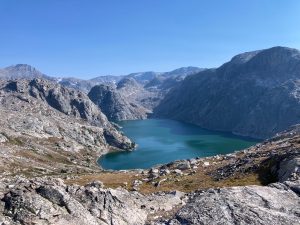 I made my way west and slightly north, aiming to intersect my planned descent route from Hunters Hump. Once on track, I traversed high above Bear Lake on a bench, then aimed for a gully leading to Faler Lake. This turned into a choke of large talus that had tumbled from either side, but was not too difficult. I even found a cairn here, and faint bits of use trail leading down to Faler’s outlet. Other than an ancient and long-disused windbreak near one of the lakes higher up, this was the only sign of human presence I had seen since Downs’ summit. 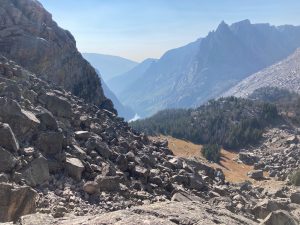 Clear Lake from near Faler

I was briefly encouraged by a good trail leading along the stream down from Faler, but this soon faded and disappeared, likely just a continuation of the much longer route reaching Faler from the northwest. I found bits of game trail on the steep slope down to Clear Lake, but was glad to be headed down and with a light pack. Starting in this direction would have been miserable. Unfortunately things became dramatically worse at Clear Lake. Sometimes I would find a bit of game trail in the woods; sometimes, I could walk along the narrow, rocky beach; twice I had to climb well away from the lake when cliffs came straight down to the water. 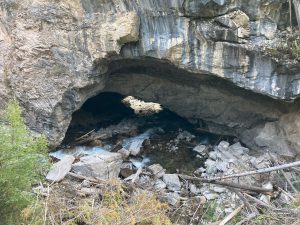 Finally reaching the outlet, I found a couple of old fire rings, giving me hope that fishermen had maintained, or at least beaten in, the old trail leading down to Clear Creek Arch. Unfortunately this was not the case: I found one set of boot-prints from this season, and occasional trail, but progress was slow and miserable. A fire had left many downed trees and some nasty brush, making it easiest to climb away from the creek and cross talus-fields where possible. In the woods, I was forced to constantly step over or balance along fallen logs. Kelsey’s description of it as “the worst bushwhack in the Winds” may be an exaggeration, but even to someone who has spent significant time in the North Cascades, this was rough going. I continued making steady progress, but abandoned my hopes of stopping in Jackson to download some new listening material. As long as I could reach the maintained trail by headlamp time, I would be satisfied.

As it turned out, I managed to (barely) reach the car without a headlamp. I minimally unpacked my pack, threw stuff in the roof box, and took off for Lupine Meadows. Between the rough Green River Road and the lower night-time speed limits, I reached the trailhead around 11:00 PM. Having started Francs Peak just after 10:00 AM, I wanted to finish the Grand before that time to stay under the next round day. To guarantee that, I allowed myself seven hours to go up and down the Owen-Spalding. I shoved food and water in my daypack, set my alarm for 2:30, and passed out.

Flagstaff to Downs from Bastion

Clear Lake from near Faler