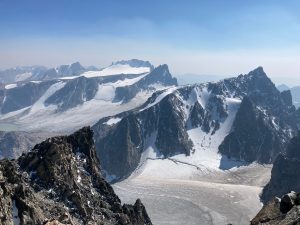 There remained eight ranked 13ers east of Titcomb Basin and Dinwoody Creek. Four of them — Fremont, Sacagawea, Helen, and Spearhead Pinnacle — form the eastern wall of Titcomb Basin, while the others — Warren, Turret, Sunbeam, and Febbas — form a line south and east of the Dinwoody drainage. I had originally planned to do the two groups separately, but it seemed possible to link them all with a long effort and a bit of luck. This would require linking the first four peaks along their east sides, which are glaciated and seldom-visited. 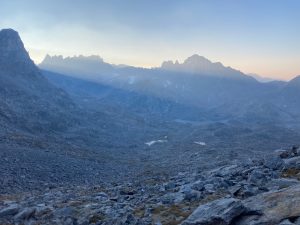 I hopped off my perch and started back up toward Indian Pass at first light, headed for the standard southwest slope of Fremont Peak. I left the trail at an arbitrary, convenient-looking place and made my way up gentle grassy slopes, aiming for the faint saddle where the south ridge separating Indian and Titcomb Basins merges into the peak’s face. I occasionally found bits of trail, which turned into a cairned route once the going became steeper on the slope. There was the occasional third class move, but most of it was easy walking and boulder-hopping. It was also uncomfortably cold, with the sun still hidden behind the mountain and a steady wind from the west, and I climbed in my heavy gloves and down jacket, with the hood pulled around my face. 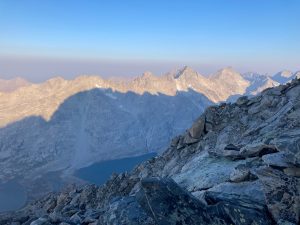 Reaching the summit ridge, I found a cairn and register at the highpoint, and paused on its sheltered and sunny side to recover and prepare for the day’s first unknown. If I could descend to the Upper Fremont Glacier, I could quickly reach Sacagawea without losing much elevation. Otherwise, I would be forced to retrace most of my route, drop to Mistake Lake, and reascend Titcomb Basin’s east wall between Sacagawea and Helen. Kelsey describes a route up one of the couloirs on Fremont’s northeast side, but I was not sure it would be feasible so late in the season with running-shoe crampons. 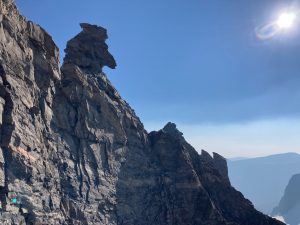 I set off along the ridge northwest, peering over the right side, and eventually reached the second major couloir, which looked like it might work. Putting on crampons and taking out my axe, I carefully kicked my way down one side, but found the snow too hard and steep to be comfortable. I returned to the notch and hiked back to the summit, thinking along the way. Looking at the map, it seemed that if I could make my way along the peak’s east ridge and the rock separating the Upper Fremont and Bull Lake Glaciers, I could reach the flat section of the former. The ridge looked serrated, but not impassable, and an exploratory scramble over the first gendarme was encouraging. 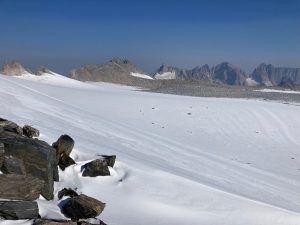 The ridge’s north side was snowy and sheer, and the crest too crenellated, but the right side looked broken enough to be passable. I began traversing, trying not to stray too far below the ridge, and soon found a band of black rock that offered mostly easy passage with the occasional fourth class section to cross a gully. Not only was I making progress, but I was warm and happy to be discovering a “new” route. The traverse led nicely below the ridge’s difficulties, and I scrambled back around to the glacier near 13,000 feet, where I could easily cross the flat snow and ice. I skipped joyfully across the gentle plateau of snow and ice, feeling like I was the only person to have done so in a long time. Looking back at Fremont’s imposing northeast face, I saw that the couloir I had tried ended in a gaping bergschrund, so I was lucky to have abandoned it quickly. 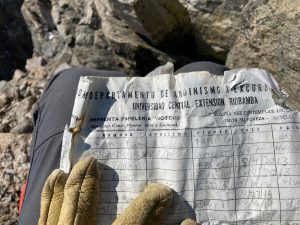 Sacagawea is a minor peak from this side, a talus-pile leading to a final, tricky scramble over a couple of false summits. I had been enjoying my time on the leeward side of the crest, so the scramble along the summit ridge, either on the snowy northern side or exposed to the southwest wind, was an unwelcome change. After a few clear days, the wind was also bringing in smoke from perpetually-burning California. I signed the unexpected Ecuadoran register, then retreated to the back side, where I had to descend quite a ways east to get around cliffs on the peak’s north side. 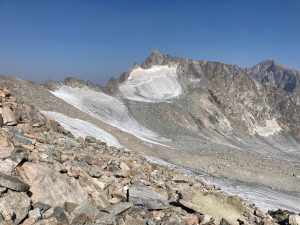 The normal route on Helen climbs its southeast glacier and face, but the former looked too steep and icy for my gear, with possible moat problems getting to the latter, so I dropped farther and climbed the easy class 2-3 east ridge. I found only a bit of route-finding and fourth class scrambling near the summit, which had an excellent view of Warren and Turret, and an unclear view of my next objective, Spearhead Pinnacle, a lesser peak hidden in the confusion of pinnacles south and west of Warren. Now I just had to figure out how to reach it. 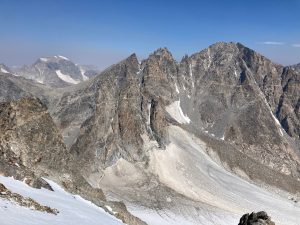 Helen can be climbed from Titcomb Basin via a col to the north and one of a few couloirs on its north side, and skied via the giant couloir leading from near its summit all the way down into the basin. I made my way down a chossy couloir to the saddle, then scrambled along the west side of the ridge to eventually reach the saddle south of Forked Tongue and Spearhead Pinnacles. From there I crossed the small and somewhat crevassed glacier to their east, surprisingly finding some boot-prints likely from within the past week. The snow was all melted out from the couloir north of Spearhead, so I had to battle loose dirt and rock on my way to the col. 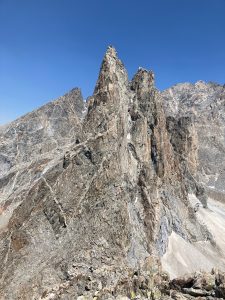 I was apprehensive about Spearhead, since it is supposed to have the hardest mandatory climbing of the 13ers (5.4), and Eric and Matt brought a rope. Climbing along the north ridge, I was also periodically buffeted by the wind. I found most of the climbing to be class 3-4, either on or left of the crest. The crux was a short, steep return to the crest; I sort-of chimneyed behind a large detached flake on my way up, and found an easier way farther right on the way down. Beyond the crux, there was a fun hand traverse, then easier ground leading to an exposed but surprisingly comfortable summit. I once again kicked myself for not bringing a pen to sign the register, and not having any conveniently-bleeding cuts on my hands. Once back below the crux I relaxed, figuring that the rest of the day was a simple matter of endurance. I had plenty of daylight to climb Warren, Turret, Sunbeam, and Febbas, putting me a day ahead of my original plan. 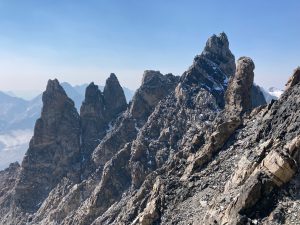 Warren was a straightforward climb from the debris-field to its south, via either chossy gullies or the more solid ribs in between them. Looking behind me, I was grateful that Doublet, Dinwoody, and their neighboring spires do not have enough prominence to qualify as peaks, as they look extremely difficult. Kelsey describes a route up Warren from Elsie Col, which separates it from Turret, that works around a step in the ridge via a “chimney” on the south. I looked for something like that, crossing a sloping plateau and descending a chute leading to the south side, then doing some fourth class scrambling to exit the chute and return to the crest. Perhaps this was what he meant, but in any case it worked and got me to the col. 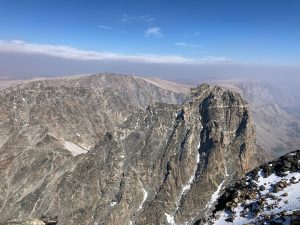 Febbas and Turret from Warren

Turret supposedly has a couple of routes from this side, a “southwest ridge” that is actually mostly in couloirs, and a couloir used on the first ascent. I started up what I thought was the “southwest ridge” couloir, but apparently missed the side-chute one takes to gain the actual ridge. Instead, I topped out at a notch, then made a sketchy downclimb into the main couloir, which I followed until it topped out between two of the summits. From the top, I had some tricky downclimbing getting down the north ridge to Backpackers Pass, as several sections were slabby and covered in snow. I generally stayed left of the crest, in a sort of face/bowl, before crossing where the ridge turns to downclimb some sketchy slabs, then descend easier talus to the saddle. 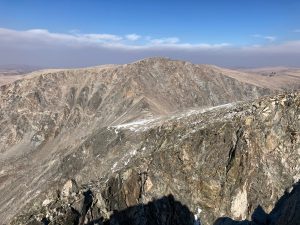 Sunbeam was short, quick, and not particularly memorable after the rest of my day. It also seems more popular than any peak since Fremont, as it is an easy hike from Blaurock Pass. My descent to the pass was made more pleasant by some patches of snow covering the talus. From there, it was a quick side-trip to Febbas, the highpoint of Horse Ridge, a huge tilted plateau on the east side of the range. Its summit has an impressive view of the glaciated side of the Divide, from Gannett to Jackson. 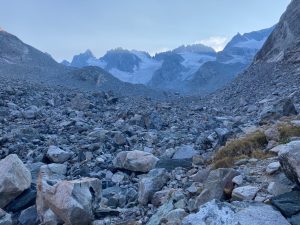 Pleased with my work, I returned to Blaurock Pass, where I picked up a faint trail that faded into and out of existence on the long descent to Dinwoody Creek. It was getting toward evening, and I met two campers at a lake near the junction with the official Glacier Trail, though they were not in a conversational mood. I found a dry crossing of Dinwoody Creek, then picked up the trail near where it reaches the moraine and disintegrates into multiple cairned paths. This part of the day was unpleasant and depressing. The big Dinwoody Glacier has retreated a half-mile or more, leaving behind a mess of dirty lakes, loose sand, and piled boulders. Slogging through this wasteland toward the shrunken, separate lobes of what was once a single glacier, I decided that I would prefer to avoid coming this way. 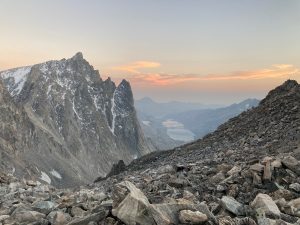 I eventually reached the glacier, and put on crampons for the climb up to Bonney Pass. Looking at the upper glacier on my way by, I saw that the lobe extending from Wilson and Pinnacle Ridge was bare and badly crevassed, making my route to those peaks from this side likely difficult or impassable. I reached the pass around sunset, and fortunately made it down the other side before headlamp time. The steep, loose descent on a faint trail gave me yet another reason not to climb the Gannett-area peaks from the east. I had plenty of headlamp time to come up with another plan as I walked down the endless head of Titcomb Basin, then past the two large lakes, disturbing a man in a tent along the way. Too tired to cook, I crawled up on my rock and into my bivy, then ate half a pepperoni before falling asleep.

Fremont from the NE

Febbas and Turret from Warren