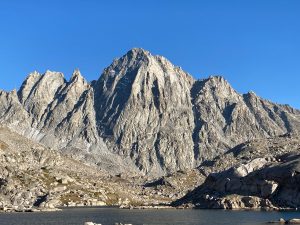 My failure to grind out evening trail miles the day before incurred a morning pack plod, from Shannon Pass down to the approach trail from Elkhart Park, then up to the Indian Pass trail junction. Knowing I had a big day ahead, I managed to get started toward the tail end of headlamp time. This kind of mindlessness, some of it forested and uninteresting, required me to dig deep into my podcast reserve to pass the time. The one that stuck in my mind was an interview on the FKT podcast with a guy who seemed seldom to travel without a “crew” on all his FKTs, including at least pacers, aid station workers, and a social media person; sometimes there was also a videographer. This engendered dark thoughts of professionalization, commercialization, and the all-consuming cancer of social media, where micro-influencers (i.e. sharecroppers) eke out a bit of free stuff promoting and leveraging their “brands,” so that soulless engineers can be paid well into the six figures and Mark Zuckerberg can buy private islands and politicians. But then my mood brightened: I was out in a beautiful and remote place, using my abilities as I chose, and accountable only to myself. If I turned around and headed back to the trailhead, no one else’s time would be wasted, and only a few friends would be the wiser. 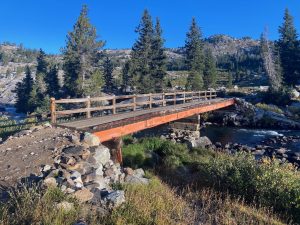 I began seeing more people after joining the standard Titcomb approach from Elkhart Park, perhaps a dozen before I reached the Indian Pass junction. I found a giant flat-topped boulder nearby, an adequate “durable surface” to camp, and eagerly dropped the big pack to prepare for the day. Not knowing what to expect, I brought crampons and ice axe in addition to my ration of two Clif bars, two packs of pop-tarts, and a quantity of wasabi almonds. The day was already well advanced, and I had four peaks to climb, but I was still on the right side of the equinox and could count on clear skies. 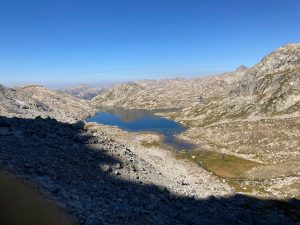 First up was Ellingwood Peak, so named in the 1930s, then officially rechristened “Harrower” in honor of a ranger and Pinedale mayor in 1968. Both men have legitimate ties to the peak, and Harrower has a cooler last name, but I am a climber, so I prefer to call it “Ellingwood.” As I hiked toward the unnamed lake at its base, hopping from rock to rock in the low stream, I debated which route to take. The easiest way would be to circle around to the saddle with neighboring Elephant Head and scramble the class 3-4 ridge up the “back.” But the north arete is a 5.6 Kelsey claims is “the best in the Titcomb area,” which has been on my to-do list for many years. Remote, long, and utterly committing, it would be the technical crux of my whole outing. I had not done any scrambling at that grade in awhile, and was somewhat tired and on a deadline, but the arete would be much more engaging than the standard route, and I was not sure when I could next motivate myself to either dayhike it or backpack in for it. 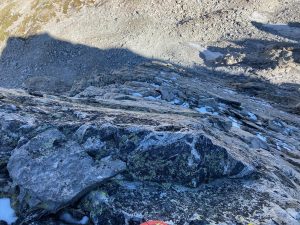 Somewhere on the ridge

I vacillated as I skirted the lake’s south shore, and began heading toward the easier standard route, but then some switch flipped in my mind. I was here for adventure, and ready to apply myself. My indecision had put me awkwardly high for the approach, so I had to side-hill across some talus-fans and couloirs, doing a bit of fourth class to get out of one. I skirted up and around some ice in another, and ended up on a grassy ledge at the base of what I thought was the arete. I retreated a bit to climb a step on the right side, then started up a dihedral with a crack. Though I did not feel comfortable and backed off, I saw a large stuck nut, suggesting that I was in the right area. I tried another dihedral to its right, felt better, and found an ancient spinning hanger attached to the rock by a skinny, rusty bolt. Now confident that I was on-route, I got to work. 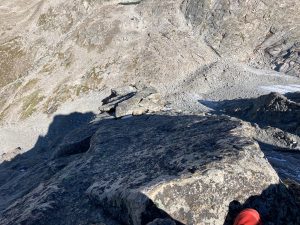 While there are plenty of ledges on which to rest, the north arete’s climbing is sustained. Much of the first part is stemming up slanting dihedrals left of the indistinct ridge, which feel secure on the route’s solid, grippy rock. Higher up, I also found some short, easy liebacks and a heady section of steep face climbing on knobs to return to the crest. It is heads-up climbing requiring good route-finding, and there are no possibilities for escape, but nothing felt harder than the first pitch. I took a couple of photos, but was mostly focused on the climbing, paying no attention to time as I climbed higher and the ridge became more pronounced. Though it is north-facing, most of the route was fortunately snow-free. This changed near the top, where a slabby headwall held patches of snow and ice. This forced me to the right, where I had to carefully climb some featured but worse, lichen-covered rock that did not require friction climbing. 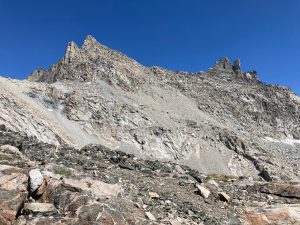 Finally at the summit, I found some kind of giant milk jug for a register canister, which contained the register and an explanation of the peak’s official name, but alas no writing implement. I basked in the sun and my success for awhile, then set about finding my way down. The peak’s standard southwest ridge route was tricky near the top, with a bypass to the west where many people seem to rappel, but soon eases off to ledge-walking on the east side. As the ridge nears a saddle, I headed east, aiming to cross the deglaciated bowl beneath the peak’s south face. This would probably be an easy walk with snow, but was instead a mix of talus and benches, with several slab-sided gullies requiring a bit of route-finding to cross. I meandered up and down while staying fairly high, then climbed to the saddle southwest of Knife Point. Though it looks impressive from some angles, and shelters a substantial glacier on its northeast side, the peak is mostly an easy scramble when wrapping around its south side, and its east face is a boulder-field. I stood on the summit block, noted the bighorn skull someone had placed nearby, then took off across the endless talus to Bete Noir, a.k.a. Brown Cliffs North, an unimpressive plateau well east of the other 13ers. 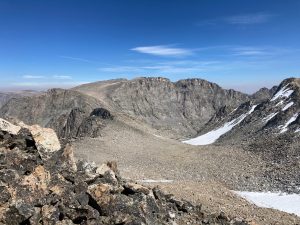 Bete Noir’s summit is one of several bumps on the plateau, most looking like giant brownish-gray cow turds. I tagged the one with the cairn, plus another pile of talus to its northeast that looked just as high, then headed back the way I had come, following a convenient ledge around the steep talus-slope on the col above Alpine Lakes. This is probably part of some backpacking route, because I found a bit of a trail leading down into the disaster once covered by the lower Knife Point Glacier. I crossed this wasteland of loose talus, glacially-pulverized grit, melt-streams, and brown ponds, then crossed the remaining glacier on my way to Indian Pass. I could have avoided it entirely, or stuck to low-angle parts, but I had not yet used the crampons I had brought, so I decided to give them some exercise. 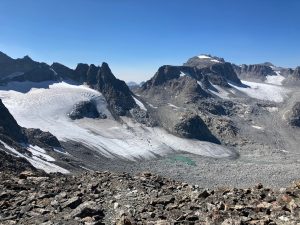 Reaching the wooden post at the pass, I picked up a decent trail heading back toward camp, which I followed only a short distance. The standard route on Jackson is described as a ramp leading up from the first lake below the pass, but I saw a higher chute leading to Jackson’s long summit plateau, and decided to take that instead. It was the loose garbage-chute I expected, but turned out to be an easy and efficient route through the cliffs. From the top, I climbed a shallow valley to the crest, then turned left to boulder-hop toward the summit. A couple sections of snow made travel easier, but it was mostly bare. 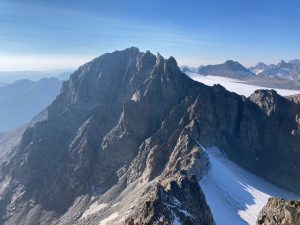 From Jackson’s summit, it was clear why it is not normally linked with nearby Fremont: its north face down to the glacier is sheer, and Fremont’s southeast ridge up from it looks difficult. I enjoyed the late-afternoon views of Ellingwood and Island Lake, then returned to the shallow valley. Figuring the standard route might be better than what I had found, I followed some cairns heading left from the bottom of the valley. They led into a bowling alley and disappeared, leaving me to pick my way down loose terrain and gritty slabs that felt harder than what I had climbed.

Once back on the trail, I made an earnest effort to jog and walk quickly to beat the sunset. However the trail is braided and confusing in places, and the evening light on Ellingwood’s north face compelled me to stop for frequent photos. Less than a mile from camp, I came upon a line of kids with running vests, one even hipster-ed out in skinny pants, a checked shirt, and chunky glasses. They were coming back from Fremont, headed to a camp somewhere below Island Lake. I passed them after chatting for a minute, then watched them hike by in the fading light as I performed my evening camp routine. I had big, uncertain plans for the next day, and wanted to get as much sleep as I could on my not-quite-flat pedestal.

Somewhere on the ridge

Fremont and Jackson from Ellingwood

4 responses to “Ellingwood/Harrower to Jackson (4 peaks)”