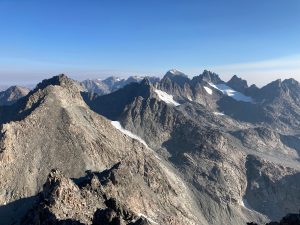 I had thirty peaks to climb in eight days before I ran out of food, and hoped to do them in seven. That meant I had to average just over four a day, and my single peak the day before was dragging down my average. It was time to fix that. There are six 13ers surrounding the cirque above Peak Lake, with Bow, Henderson, and American Legion on one side of Knapsack Pass, and the Twins, Split, and Whitecap on the other. While one cannon simply traverse along a ridge from one to the next, they seemed to form a natural link-up. Looking at them up close, it seemed easier to tag Bow by itself (and I had had extra time the day before), leaving the other five and giving myself time to add Sphinx in the hope of simplifying my route later on. 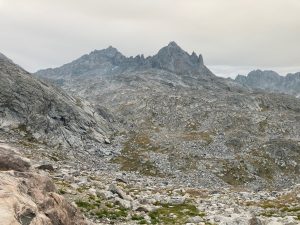 I left my camp in place at Shannon Pass shortly after first light, hiking down the trail a ways before heading off cross-country before Upper Jean Lake toward the lake at the base of Henderson’s east face. I knew that Eric had used the north ridge, and Kelsey said the face was class 3 or 4, so I could use whichever seemed most convenient. I filled up on water at the lake’s inlet, looked at the long talus-slog leading to the col with American Legion, and decided to climb the face. There are many possible paths, following a mixture of talus and ramps, and I picked what felt best as I made my way to the ridge just north of the summit. The ridge itself is a bit of a block maze, so I dodged back and forth, eventually taking the west side to reach the summit. Here I had a mostly-unobstructed view of the Titcomb Basin peaks in morning light, showing their most intimidating faces. The ridge south to two unnamed 12ers looked hard, but American Legion seemed to be a simple boulder-hop from the col. The register was an old gem from the 1940s, left by the Wasatch Mountain Club before the peak had a name. 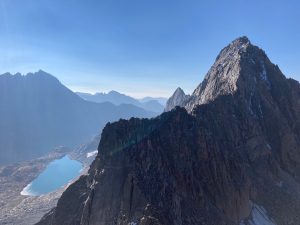 Getting down to the col was a bit trickier than I had expected, in part because I had to contend with snow lingering in places on the north-facing ridge. The ridge crest remained intermittently blocky, so while I could sometimes follow it, I often bypassed it to one side or the other. American Legion was mostly as easy as it looked, with only a bit of scrambling near the summit. Befitting the peak’s name, the register was a well-kept book in a sturdy ammo can decorated with military pins. Unlike Henderson, this peak sees a fair amount of traffic, including the authors of a documentary about the death of the Colorado River, at the start of the longest route water can take to reach the Gulf of California. 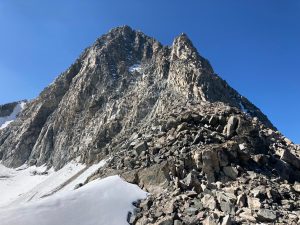 After adding my name, I faced the day’s first big question mark. Kelsey says that he reached Knapsack Col from American Legion with a rappel to the glacier, and that someone mentions climbing the north ridge in the register, suggesting that it goes. However this is not a normal route, and there is also annoying little Winifred Peak standing in the way. Though it looked like I might be able to pick my way east down the face to the glacier, my life would be much easier if I could descend the ridge, so I headed off to give it a try. A number of towers and drops made this difficult and time-consuming. While I preferred to bypass them on the sunny east side, I was often forced to the shady and snowy northwest, where I encountered the day’s sketchiest climbing getting down and around a notch and ravine. The route would have been easier when dry, but still apparently low fifth class. 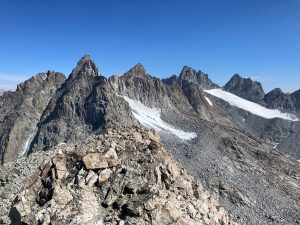 Finally at the col, I was relieved to make an easy boulder-hop up Winifred, then descend some loose scree and talus to Knapsack Col, finding a faint use trail along the way. The south ridge of West Twin looked difficult, so I descended around the right side to reach the col between the two Twins via the southeast glacier. Having done Bow the previous day, I had some extra time, and decided to tag Sphinx and possibly Warren. If I tagged the former, I could climb the latter from the Dinwoody side, avoiding another trip up from Titcomb toward Knapsack Col in another few days. 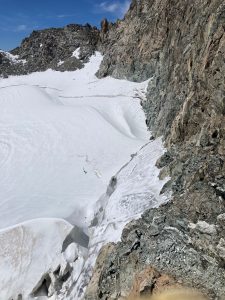 Dropping around the East Twin’s slabby south ridge, I crossed some annoyingly hard ice to try to stay high, then climbed a talus-field to the Sphinx Glacier. This was crevassed on the left, but easy in running shoe crampons to the center and right. I followed a snow ridge above a deep wind-carved swale below Sphinx’s west face, then was stopped just before the Sphinx-Wilson col by an annoying bergschrund. It looked possible to climb out the other side on the right, but tricky to climb in, so I traversed to the far left where it met the rock, then sketched my way back across the icy remnant above the ‘schrund to the rock below the col. 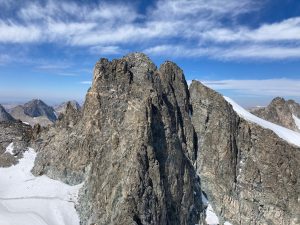 Stashing my crampons, I started up the northwest ridge, cruising some class 3 climbing on dry rock. Unfortunately the ridge steepened and forced me to the left, where snow on outward-sloping ledges made for careful climbing. I wandered quite a ways from the ridge, then climbed straight back up to the crest beyond the difficulties, where easier and drier ground led to the summit. Sphinx has magnificent views in both directions, with the Titcomb Lakes on one side and the much-shrunken Dinwoody Glacier on the other. I studied what I could see of Woodrow Wilson: the south chute looked unpleasantly loose at least, and possibly impassable with a large, exposed chockstone; the high glacier lobe to its northeast looked more promising. My hopes of adding Wilson to the day were dashed, but at least the Dinwoody route looked promising. 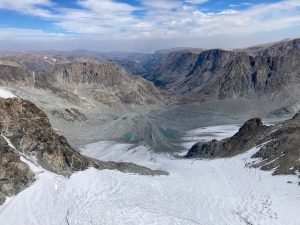 I tried to get clever and stay closer to the ridge on the descent, but this proved ineffective, and I wasted time cliffing out on slabs before returning to the slow but tried-and-true route on the snowy side. Relieved to at last be past the ‘schrund, I skipped down the glacier, then ground out the talus slog back toward the Twins, dropping lower rather than fighting the steep ice. As it turned out, this side-trip was a waste of effort, though it did not cost me any time in the overall speed record. 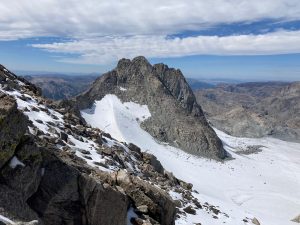 Reaching the Twins col was slightly tricky, with steep-ish bare ice giving way to loose garbage on top this late in the season. East Twin was an easy boulder-hop, while West required a bit more scrambling, once again made trickier by lingering north-side snow. Looking toward Split from both, it was clear that it made no sense to traverse the serrated ridge from West Twin. A traverse down and around via the Mammoth Glacier only drops to about 12,000 feet, and Split is an easy boulder-hop from the saddle to its west. Reaching the lower Mammoth required a bit of path-planning, as the upper part had several long crevasses partly hidden by snow. However nothing desperate was required, and I was soon traversing under Split’s sheer northeast side and zig-zagging up a glacier tongue to the saddle. I was getting tired, so the talus-grind to the summit was slow but mercifully short. 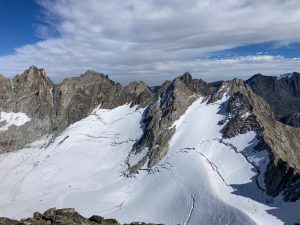 From the summit, I had a magnificent view of the upper Mammoth Glacier in some worryingly late-feeling afternoon light. I took some time to contemplate the day’s second and third big question marks. The slope down from Whitecap to above Peak Lake looked easy, but the ridge to it from Split looked intimidating. Kelsey does not mention the ridge at all, and says of the unnamed intervening peak more or less “there is no reason to climb this slag-heap.” Eric had dropped all the way around and down to almost 11,000 feet when linking these two peaks, but that sounded miserable, so I resolved to try the ridge, trusting in my ability to usually make things work. 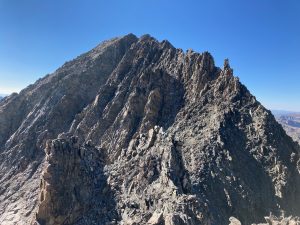 Peak 12,845′ was unremarkable, but nowhere near as bad as Kelsey’s description had suggested. The ridge itself, while perhaps little faster than going around, took less energy and was much more fun, cheering me toward the end of a long day. The best route tended to stay on the crest or to its left (dry) side, with only one tricky low fifth class bypass on the snowy right. My hopes of boasting a coveted First Ascent in the Winds were dashed when I found a cairn at a convenient notch bypass, and again when I found that some kind of decent-sized animal, whether bear or cat, had climbed to just below the snowy-side crux. No matter: it was all uncharted territory to me, and I enjoyed just as much uncertainty and problem-solving as if I had in fact been the first mammal to touch these rocks. 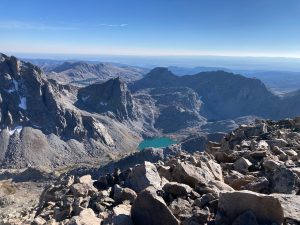 Whitecap, named for a permanent summit snowfield, is bare now, and I found no register in a quick search of the summit cairn. It felt late, and Shannon Pass still looked far away. I roughly followed the route I had picked out on the south side, aiming for the valley north of a rib descending southeast to the stream above Peak Lake. However, many lines are possible on this side of the peak, and no doubt others have climbed it on their way over Knapsack Col. I picked up a decent trail at the valley bottom, and was surprised to meet a group of two couples hiking one way or the other. After seeing no one all day, it felt almost crowded. The trail makes its way around Peak Lake’s north shore before joining the Shannon Pass trail. I made it back to camp before dark, and probably should have put in another hour of hiking, but decided that this was enough. I believed (incorrectly) that I had taken care of the most uncertain part of my trip, had snagged Sphinx as a bonus, and felt well on track to make it out in seven days.

Tracks ahead of me