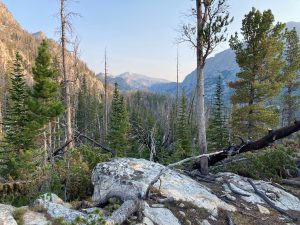 Wind River Peak is an outlier among the Winds’ 13ers, being farther south, gentler, and less glaciated. I had recently run it from the east starting at Worthen Reservoir when Renee was visiting, but this time decided to come in from the south via Little Sandy. There are two trailheads from which to do this, Block and Tackle Hill and Sweetwater Gap, with the former being shorter if you have a bike. Since I do, I chose to do that. Unfortunately, a major wind event over Labor Day of 2020 massacred much of the forest from just north of the Hill to the north end of Little Sandy Lake, leaving much of the trail littered with downed trees. So while this route was about eight miles shorter than coming in from Worthen, it was probably no faster. On the other hand much of it was new to me, so I was introduced to more of this relatively unfamiliar range. 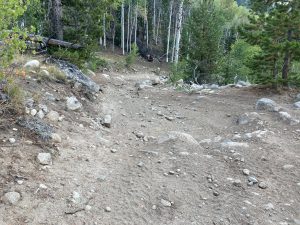 Though the road started off smooth past the Forest boundary, it soon turned impassable to anything other than an ATV or possibly souped-up Jeep. I was able to ride some, but quite a bit was hike-a-bike as it became too steep, loose, and/or rocky. Near the top of the hill I kept seeing a light in the sky to my left, which was too orange to be Venus, too bright to be Mars, and too small to be the moon. I soon learned what it was: a light on top of a wooden flagpole flying the US and Wyoming flags. Perhaps it was solar-powered, as there were certainly no power lines in the area. I had to be cautious on the downhills past the flagpole, as my headlamp and puny clip-on light were no match for a decent modern bike light. I briefly got off-track and was stymied by a creek ford, then retraced my steps to find the correct route, riding between walls of dimly-seen sawn logs on a road that was, as befitting the area, a little sandy. It was too cold to be riding so early, and I had to stop several times to warm my hands. 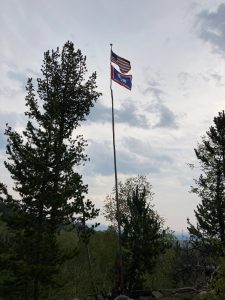 Finally nearing where the Wilderness boundary was drawn on my map, I saw a big canvas tent with a light inside. Clearly the occupant was awake but, figuring I would slip by without disturbing his morning, I swung my headlamp around looking for some sort of trailhead sign and a place to lock my bike. This, of course, was not exactly stealthy, and the man and his dog came out to greet me. As expected, he was dressed in camouflage, and somewhere between groggy and grumpy to have been disturbed in the middle of his morning routine. He asked me where I was going, and when I told him “Block and Tackle,” he confirmed that this was it. 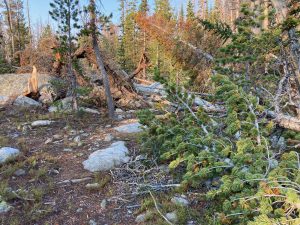 Dawn being peak elk-hunting hour, he asked me to wait a minute so that we could walk together as far as his nearby hunting-grounds in the marshy, grassy area where the Little Sandy meandered nearby. We talked a bit as he finished his coffee, and he warned me that while the trail had been cleared as far as a nearby field where a friend from Farson’s ashes had been spread, it was a mess of downed trees beyond that. I assured him that I was used to such things. As the light slowly arrived, I saw that he also had a side-by-side 4×4, a target and basic compound bow (not one of those fancy ones with pulleys), and American and Wyoming flags flying from a snag. Done with his coffee, he tied up his dog, took a couple of well-aimed practice shots, and we set off up the valley. I tried to be as quiet as possible, but he seemed happy to talk in low voices and not particularly careful in how he placed his feet. He confirmed my understanding that bow-hunters have to be very close to take a shot — 25 to 30 yards — so perhaps he intended to later hide and call the elk to him.

We parted ways in a field, he to look for the source of the bugling and me to hurdle and thrash through logs. I spooked a couple of cow elk, and heard a bull screaming occasionally to my right, but hopefully did not hurt his prospects. The downed trees made travel slow, but at least they gave me plenty of log bridge options at the first creek crossing. I picked up the trail-bed on the other side and, with the help of both my map and my eyes, had little trouble following it as it wound its way north and gradually climbed. There was a pile of rocks at the faint junction where the other trail came in from Sweetwater Gap, and I also found occasional cairns and faint boot-prints. Though it likely no longer sees maintenance, the Little Sandy has not been entirely forgotten by backpackers. 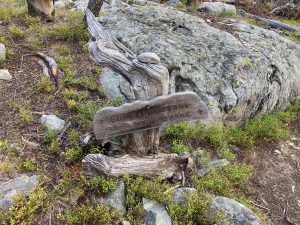 Before Little Sandy Lake, I found a ridiculous sign in the middle of the devastation pointing to Big and Little Sandies, and headed toward the former. This took me away from Little Sandy Lake and up a side-valley to get around a constriction, and involved some of the worst deadfall and hardest trail-finding. Animals and humans alike had created multiple routes through the chaos, none particularly fast. Finally, at a broad meadow above the lake, the trail descended out of the woods and became clear once more. I admired the towering granite walls to either side as I hiked and jogged upstream toward the semi-obvious chute or ramp leading up to Coon Lake. 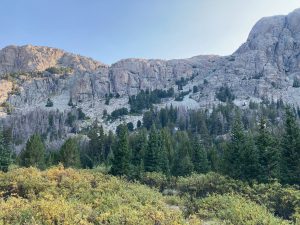 Leaving the trail, I managed to dunk one foot crossing the braided river, which annoyed me but did no real harm, and made it to the chute with almost no thrashing. Climbing up the chute, a mixture of semi-stable talus, hard-packed dirt, and spiny currants, was tedious but efficient. Emerging at the top, I found myself just above Coon Lake, where I picked up a faint fisherman’s trail leading around the near side. Somewhat to my surprise, I also found a fisherman, sitting placidly on a rock and failing to catch fish. I talked to the solitary older man for awhile, and he told me he was retired, and sometimes worked on the trails to pass the time. He was only moderately surprised that I was out for just a day carrying so little gear. I felt somewhat out-of-place, an outsider running around these mountains setting some silly “FKT” while these older men enjoyed and took care of their backyard wilderness. 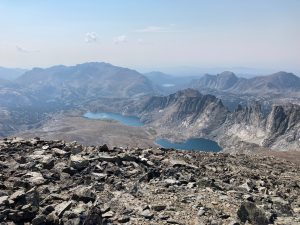 I crossed the lake’s outlet, then made a slightly annoying cross-country traverse to shortcut the indirect trail down the valley and back up toward Tayo Lake. Once on the Tayo Lake trail, I was on familiar ground from my recent run. I passed the lake and made my way up more or less the same route to the summit, though with much less jogging. I had the top to myself this time, and it was colder, but I spent the time to take a few photos and send a couple of texts before retracing my steps. The forecast had called for possible afternoon showers, and by the time I returned to the Little Sandy, clouds had built over the mountains with shocking speed. However, I only felt a few drops of rain as I made my way southward and downward to the trailhead.

I greeted the hunter, John, and he emerged from his tent in a better mood and much more talkative now that he was fully awake and not trying to surprise an elk. I learned that he had been coming to this spot to hunt for decades, and that the peak of the rut was not for another few weeks. He planned to stay up there for that entire time, or at least until he got his kill — like many hunters, he seemed to do it for the quiet escape to nature at least as much as for the meat. He also told me that the area’s trails had been put in by the CCC, who had named Block and Tackle Hill for having to use blocks and tackle to ratchet their wagons up the steep slope. Reluctantly departing, I rode back to the trail, glad to have a bike despite having to walk it down some of the steep, loose, rocky sections of the hill. Back at the car, I quickly put my stuff away, then returned to the Lander Cutoff, continuing on the network of good dirt roads to pavement at Boulder, then driving on through Pinedale before taking the wretchedly-washboarded dirt road to Green River Lakes. I packed as much as I could in my overnight pack, including 16 pounds of food, then got to sleep around dusk, slightly nervous before the start of the serious and uncertain part of my journey.