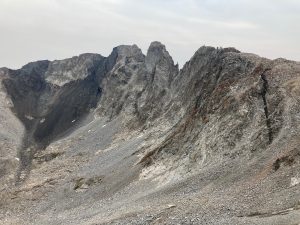 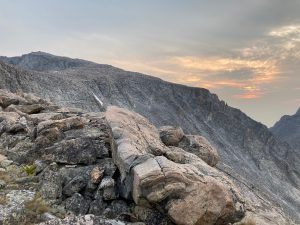 Most of the trail to Cloud is rocky, wooded, and boring, so just as last time, I did not mind doing it by headlamp. I had a bit of trouble finding where to leave the official trail for the use trail up Cloud, but managed without too much backtracking. It was light by the time I reached the endless boulder-field toward Cloud’s summit, but the day dawned both cloudy and smoky, so the views were not exciting. I hopped from rock to rock at a steady pace, following a line of cairns near the right side of the plateau to where it bottlenecks below the summit. The last stretch from there to the summit seemed to take forever, and I was increasingly unhappy as my hands froze in the cold and wind. I huddled behind the summit boulder to examine the register, then headed into new terrain on the descending talus plateau toward Black Tooth. 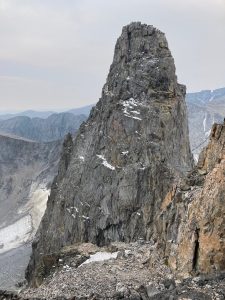 Woolsey from near saddle

I followed Eric’s track for awhile, then dropped down sooner than he had, following a steep and mostly-dry gully toward the head of the Cloud Peak Lakes drainage. Contouring high to save elevation and talus-hopping involved some steep slabs and probably did not save me any time. I found generally class 2-3 terrain on my way up the gully to the saddle between Black Tooth and Mount Woolsey to its south. Were it just 22 feet higher, Woolsey would be a formidable addition to the Wyoming 13er club, looking intimidatingly steep on all sides. Black Tooth, on the other hand, has a moderate class 2-3 ramp leading around its northeast side to the summit. I found and signed the register, which showed only a few climbs per year, tagged a point farther north just to be sure, then retraced my route to the saddle and down the gully. 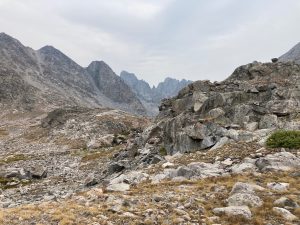 Back up Cloud Peak Lakes

The route back out to the trail at Paint Rock Creek goes on forever, passing no fewer than seven sizable lakes, the last being Middle Cloud Peak Lake. From there I found bits of use trail contouring around the toe of Cloud’s long west-southwest ridge, rejoining the Cloud Peak climbers’ trail just before the official Solitude Trail. I jogged the smoother sections of trail to relieve my boredom, but tried not to push too hard. Passing Mistymoon Lake, I spotted a bull moose calmly stripping leaves off the shrubbery, who glanced up only long enough to see that I was merely passing by. It was mid-week, but there were still numerous groups of backpackers either at camp or on the trail, presumably headed for Cloud. 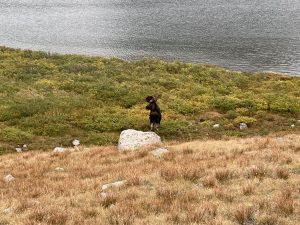 Back at the trailhead, I tried not to waste too much time before beginning my longest drive of the record attempt. From West Tensleep, I returned down Tensleep Canyon to Worland, then south through Thermopolis to Lander. A delay for “rock scaling” in the Wind River Canyon north of Shoshoni tried my patience and guaranteed that I would reach the next trailhead after dark. I stopped for gas and a brief internet session in Lander, then headed on over South Pass before taking the good dirt Lander Cutoff road. My offline maps were incorrect, but fortunately the BLM has done an excellent job signing the correct way to Block and Tackle Hill. I arrived at the Forest Service boundary at full dark to find one large pickup with an empty ATV-hauling trailer. I took my bike off the rack, shoved more food in my pack, and once again set my alarm to a painful hour before almost instantly falling asleep.

Woolsey from near saddle

Back up Cloud Peak Lakes