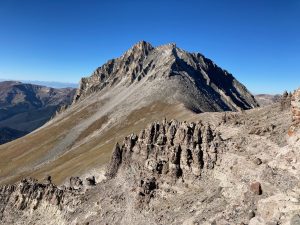 My rare outings with other people are opportunities to be pushed outside my routine of one-day fast-and-light peak-bagging. With Renee, I usually find myself running more than normal, as I did on our recent opposite-direction outings to Wind River Peak. With Ted, I often visit peaks that I would otherwise skip, such as Rainier some years ago. This time it was Washakie Needles, the highpoint of Hot Springs County in the Absarokas of north-central Wyoming and one of the 20 “Apex” (i.e. “hardest” by some measure) county highpoints in the lower 48. What makes the Needles hard is a combination of a short stretch of exposed class 4-5 near the summit, an easily-resolved private property issue, and a ridiculous 60-mile drive from the nearest town, Thermopolis, about half of which is rough dirt. I normally wouldn’t put in that effort for a single peak, because gas is expensive and I value my car, but this was a special occasion, and the Needles proved sufficiently interesting.

We met in Thermopolis on a Friday evening and drove to Anchor Reservoir, where the road gets bad, to sleep before driving the tricky part by day. We both continued on the rough dirt track the next day, Ted showing remarkable driving ability in his little Ford Focus, and me cringing at the potential damage to my aging Element. We both drove over a 9000-foot divide, where someone was harvesting timber, then Ted stopped shortly afterward near a couple of mudholes. 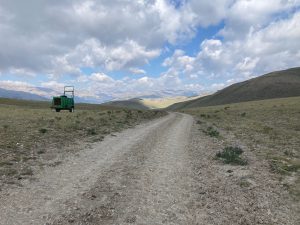 Now both in my car, we continued up a rutted climb to a locked gate guarding what is either someone’s ranch, or BLM land adjacent to someone’s ranch. Ted had tried calling the listed number repeatedly over the past couple of weeks and received no response, and we had no luck guessing the combination, so we shouldered our packs and resigned ourselves to an eight-mile road walk. Less than a mile in, just after passing an empty (nonlethal) bear trap, we heard a motor behind us and were soon caught by a man driving a backhoe. I let Ted do the talking as he asked us what we were doing on “private property.” While not exactly friendly, the driver was not hostile. Apparently he is used to rednecks with guns and ATVs cutting his fences and driving all over, so a couple of unarmed hikers were no big deal. He gave us a number for the ranch foreman, then drove on to repair the road. 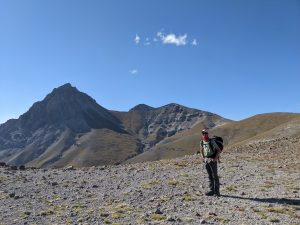 We returned to my car and drove a few miles back down the road to find a cell signal. The foreman, Josh, was friendly when we explained what we were doing. He quickly gave us the gate code, told us to be careful of the bears, and asked that we let him know if we saw any freshly-mutilated cows. Back at the gate, I drove through, then continued another indeterminate distance on nerve-wracking roads before finally deciding that enough was enough about a quarter mile before a fancy hunting lodge. The dogs at the lodge barked as we passed, but neither they nor the occupants were hostile.

We saw the ruins of some older cabins as we hiked up the road, and a few unbloodied cows as well. The cows had completely obliterated the former Forest Service trail and littered the valley with dung, and the fences and gates were all in some stage of disrepair. Apparently property boundaries and notions of ownership are vague in this seldom-visited corner of Wyoming, though locals are certainly vigilant and quick to let you know when you are on “their” land. Following more cow-paths, we left the valley where it narrows, climbing past another old cabin at treeline and eventually finding the old trail connecting Owl and Rock Creeks over the high ridge southeast of our peak. 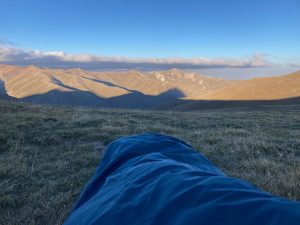 We reached the ridge in late afternoon, then found a spot to camp slightly down its eastern side to escape the persistent southwest wind. Neither of us had brought a stove, and there was no water for cooking food anyways, so I dined on Pop Tarts and Chex Mix, then slid into my bivy for the usual dismal 12 hours of pseudo-sleep. The moon rose late and the nearest town was many miles away, so the stars were bright and clear, with the Milky Way clear in the night sky. Though I am often in remote places, I usually fall asleep in my car, so enjoyed seeing the stars, even if I knew I would sleep poorly and breakfast on Clif bars and cold water. 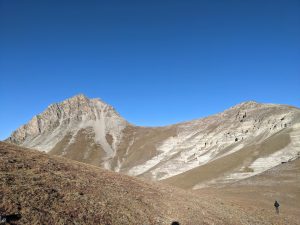 Morning was cold and windy, but at least we were on the east side of the ridge, so we got the first sun and a bit of shelter. We waited for some of the frost to evaporate, then hiked along the ridge toward the Needles, popping up to take photos but mostly staying down and slightly out of the wind. The peak itself is made of some kind of harder volcanic rock, perhaps welded tuff, but the surrounding hills are all chossy conglomerate, with fins and hoodoos poking out of the rolling tundra. At a ridge junction we headed southwest; looking at the other ridge to neighboring Dome Peak, I saw a half-dozen bighorn sheep, but decided the peak was not worth the effort. Descending a couple hundred feet to the saddle, we found a well-used game trail with some fresh bear prints. Ted was apparently more alert than I, because he spotted a mother bear and two cubs making their way up Washakie Needles toward the ascent route. They seemingly saw or heard us about the same time, because mom and cubs sped up, heading up and around a rock fin before descending a northern talus gully with remarkable speed. Surprisingly, I spotted a fourth bear sitting on a rock near where the other three had passed, which seemed to be neither with nor hostile to the other three. This was my first encounter with a grizzly while not sitting in a car, and it went just about perfectly. 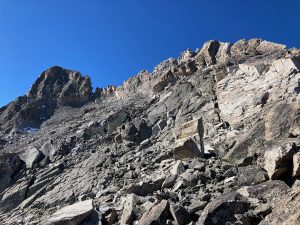 Wildlife-watching done, we made our way up some loose, blocky talus, then got on a class 3 rib to avoid a great deal more of it on the way to the base of the peak’s twin summits. Both look imposingly vertical, but the route description we found said that the higher southeast one was only low fifth class from a notch. The ridge above the notch looked vertical to overhanging from below, but proved much easier when seen up close, with good positive holds on its less-than-vertical left side. There were a couple of old bleached slings at the base, which I noted for cleanup on the way down. 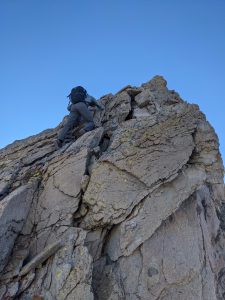 Ted had brought a rope, rock shoes, and a few cams, but I did not feel like I needed any of that on 60 feet of what felt like exposed class 4. There were a few loose blocks, but they were easily avoided, and I was soon happily back in the sun on the narrow summit ridge. I shouted my impression of the pitch down to Ted, who also made quick work of the climb. From this perch, a hundred easy but very exposed feet of traversing led to the summit, where I found a detached benchmark and a Nalgene with a pencil stub and a few scraps of paper as a register. 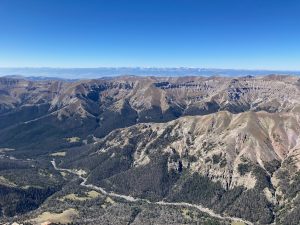 The views in all directions were glorious, with Dome nearby and Francs, the Absarokas’ lone 13er, farther north. To the southwest we could see the whole of the Winds, from Wind River Peak in the south to Gannett, the big Continental Glacier, and the high plain descending to Togwotee Pass. We could even see the tip of the Grand Teton peeking above the Pinnacle Buttes north of the pass. The Absarokas stretching from west to east to the northern horizon are a mixture of rolling tundra and chossy crags, explaining the lack of attention paid them by climbers. We enjoyed the calm, sunny views for awhile, then retraced our steps. Since he had brought a rope, Ted rappeled from a nest of tat above the notch, then I removed all the tat and downclimbed while Ted coiled the rope and cut free the last of the tat. It felt right to leave such a striking and seldom-climbed peak free of climber garbage. 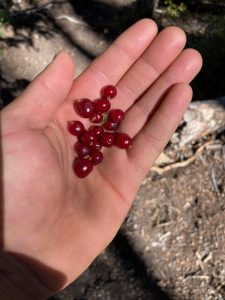 Retracing our route at midday, we saw no other wildlife, and none had molested our bivy gear. We packed up and headed back toward Rock Creek, starting down a more direct and less pleasant line before returning to the trail. Both of us were out of water, making the wax currants growing in abundance along the trail even more appealing despite their thorns. We got some water from Rock Creek, hoping it was flowing fast enough to dilute the cow dung, then hiked the dull miles back to my car. Near the end, we were passed by a couple in a pickup returning from the hunting lodge. Either the man was the one Ted had spoken to on the phone, or it was obvious what we were doing, because he immediately asked if we made it to the top. Despite roaming the surrounding area for many years, he had never tried to summit, and was curious how hard it was. I gave the usual non-answer — “not hard if you do this a lot, but it depends on your comfort and experienced” — then we threw our packs in the car for the long drive out. It was a lot of effort for a single peak, but I was glad to have visited this isolated perch.

Dome from high up