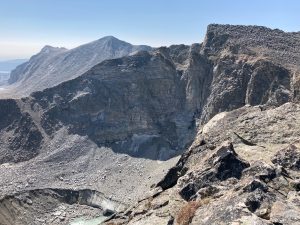 Though they merge almost seamlessly with the Absarokas to the north, the Winds end remarkably quickly in the south: Wind River Peak is the southernmost 13er; Atlantic Peak, the southernmost 12er, is only five miles south of it; the southernmost 10,000-foot peaks are only another five miles south of that; and only a few foothills lie between them and the 7000-foot southern Wyoming plain. I was looking for something to do out of the Worthen trailhead, and Atlantic looked like a moderate outing to an interesting vantage point, covering some new terrain. Atlantic did not disappoint: hiking up the Stough Lakes reminded me of the Sierra, the return along the high plateau northeast of Atlantic was easy and quintessentially Wind Rivers, and there are even a couple of well-hidden glacial remnants in the cirques to either side of West Atlantic. 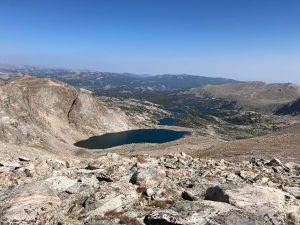 I got a slightly later start up the same trail, moving much more slowly in hiker mode after the previous day’s effort. Fortunately I had saved up enough podcasts not to be too bored hiking through the woods to the unnamed pass. I tried a bit of a jog on the other side, but my left knee quickly reminded me that it needed more time to recover. The day looked to be about twenty miles, which I could easily cover at a walk. I eventually reached the Stough Lakes turnoff, and left the previous day’s route to climb gradually up the long, broad, southward valley. As is typical, the east side was mostly gentle, while the west had been carved into steep cirques. I passed by several large fish-bearing lakes and some well-established campsites, but saw no other humans on a perfect late-summer day. 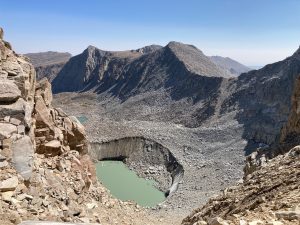 As the trails faded, I made my way for a break in the western cliffs that I had picked out on my topo map, an east-west ridge just south of one of the westernmost lakes. An easy hike up tundra and talus led to the point north of West Atlantic. The south side of my ridge was a sheer drop to the cirque northeast of the peak, where I was surprised to see an old, well-hidden glacier that did not appear on either of my maps. This shy bit of ice was completely buried in talus, except for a central lake surrounded by blue-gray ice walls. This reservoir kept the stream flowing through the Stough Lakes, even when the snow had long departed the high country. I contoured around the west side of this point, then climbed to the summit of West Atlantic, where I found a survey marker and the old wire and wood surveyors typically leave behind. From the summit, I saw that the first part of my return route would be straightforward, and spied another well-hidden chunk of ice in the Atlantic cirque. 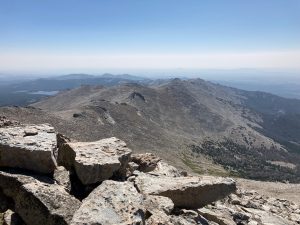 Wrapping around south and east toward Atlantic, I found the day’s only real difficulty, a section of ridge that had been carved on both sides. I could probably have made things easier by dropping north, but I stayed on the crest for some class 3 downclimbing, which soon relented and became slabby sidewalks, then boulders and tundra climbing to the summit of Atlantic. To the west were nothing but plains, with forests fading into scrubland. To the south, a ridge descended in a line of 11,000-foot bumps, the tail end of the Winds. To the northwest, Temple and Wind River Peaks stood side by side, with other high peaks indistinct beyond them. I hid from the southwest wind for a few minutes, then started for home. 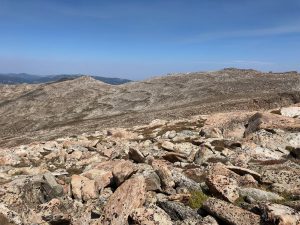 On the map, it looked like I could cross the head of Atlantic Canyon, then follow the plateau between Stough and Roaring Fork Creeks before dropping into the latter below Leg Lake, the largest of the Body Part Lakes. These lakes and a nearby creek are named for one of the darker episodes in Lander history, during the closing of the Wild West in the early 20th century. John G. Bruce was a respected Irish ranger for whom Bruce’s Bridge and Bruce’s Parking Lot are named. One night in 1920, Bruce and his beloved cat Silas disappeared suspiciously after a heated argument with the Cartes brothers, local ranchers grazing their cattle illegally on federal land. No one was ever charged with a crime, but some of Bruce’s body parts were later found in several lakes southwest of his cabin. His thumb was found in a large lake at the head of what became Silas Canyon, while other parts were found in Roaring Fork Canyon, in what became Leg, Ear, Forearm, Kidney, and Pineal Gland Lakes. Local legend has it that Bruce’s soul still haunts Pineal Gland Lake, and can be seen looking for his body on a full moon.

Grim history aside, after a steep talus descent and an easy walk across Atlantic Canyon, I scrambled up the narrow ridge east of West Atlantic, then had an easy walk north across the plateau. As is often the case in the Winds, the tricky part was getting down into a canyon, but the drainage I had picked out worked nicely. I descended some slabs and talus past a small snowfield, then worked my way around the brush and krummholtz, eventually picking up a faint, cairned trail. To the surprise of everyone involved, I met two parties of two on this obscure trail, shortly after they had met each other. One was a couple of older female backpackers headed up, probably to Stough Lakes; the other was a local man and woman out failing to fish for the day, as it was too windy to cast a fly. The trail improved as I descended, and was quite well-maintained by the time it joined the official trail network at Roaring Fork Lake. As is often the case, a “trail thataway” sign helpfully points away from this unofficial trail. I walked casually back to the car, had a late lunch, then drove into town. I was out of coffee, peanut butter, and ideas for what to do next out of this trailhead.

Path out of Stough Lakes