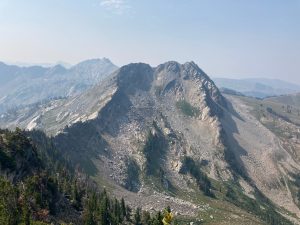 While I was in the area, I decided to explore more of the northeast Tetons, to see how feasible it would be to reach peaks around the heads of Moran and Snowshoe Canyons, such as Rolling Thunder and Raynolds. I hoped to tag at least one of these, but the heat and smoke sapped my motivation, forcing me to settle for the minor peaks around the Green Lakes basin. This allowed me to make a loop out of the North Leigh Creek trailhead, going over Dry Ridge to Badger Creek, up to Dead Horse Pass, south along the crest, then back down via the Green Mountain trail. 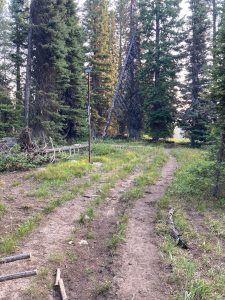 I started up the subtly-signed trail #013 at a reasonable hour, finding it in good shape initially. I ran into some dense deadfall higher toward Dry Ridge, which had only been partially cleared from the other side, then found easy travel along the ridge itself. This part is along the Wilderness boundary, and there were some impressively tall boundary signs suggesting that the area gets utterly buried in snow, and that it is probably crawling with snowmobiles in the winter. The trail down to Badger Creek was marshy and somewhat overgrown in places, but easy to follow. I turned up-valley, and tuned out a bit as I hike-jogged the miles to the Crest Trail. 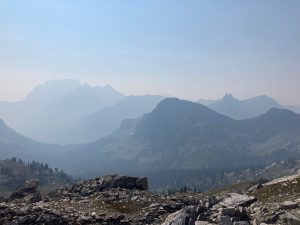 Most people seem to leave the Teton Crest Trail at Cascade Canyon, but it continues all the way to Grassy Lake Road, and here it switchbacks up to Dead Horse Pass before descending into Bitch Creek. I hiked steadily up the switchbacks, stopping to watch a golden eagle watch me from a large dead tree. At the pass, I found a fairly well-defined trail leading up the ridge to the southeast. Curiously, I also met the first two people of the day coming down this use trail from who-knows-where. My expression of surprise was met with monosyllabic unfriendliness; perhaps I had spoiled their sense of solitude.

I continued to find footprints all the way to the summit of Dry Ridge Mountain, which stands above the heads of Beaver, Bitch, and Moran Creeks. My original plan had been to continue on the ridge northeast to Point 10,852′, then head either south to Raynolds or north to Rolling Thunder. However both looked far away, and it seemed more appealing to make a loop by heading south over Green Lakes Mountain and returning to the west-side trail network. The first part of the ridge was enjoyable and easy, with smoky views down Moran Canyon. The rock near Green Lakes’ summit was chossier, though, and infested with scrub pines. I found cairns on both peaks, but no registers. 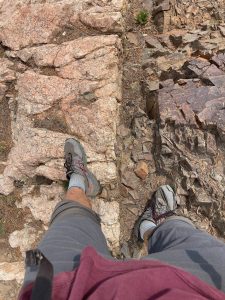 The ridge from there to Point 10,484′ was fairly annoying, with some blocky towers to avoid on the left. Going around one such, I managed to kick off a sizable rockfall, which crashed down the gully I was about to use and bounced well across the talus-field below. I carefully made my way down the newly-dusty gully, then returned to the ridge. The remainder was mostly easy, with views of an inviting lake around 9700′ and Window Peak (including its window), and a striking crossing of the Black Dike that extends all the way through the range to Mount Moran. I continued on the ridge a bit south of the summit, then dropped down to the Crest Trail just north of where it enters the Green Lakes trail mess. This is a popular destination, so I met two women camped at the main lake, and a massive train of riders and pack horses. I was outwardly friendly to them as I seethed inside, then grumbled as I dodged fresh manure the whole way home. Looking at a map some more later, this seems like the best way to reach Rolling Thunder, Raynolds, and possibly even Traverse, but that is a task for another time.