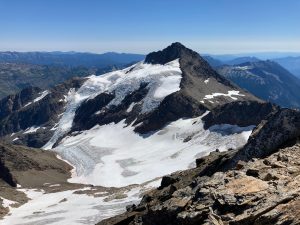 Clark and Luahna are the highest two peaks of the Dakobed Range, extending southeast from Glacier Peak on the drier east side of the cascades. Despite being on the dry side, they are high enough to hold substantial glaciers on their north and east sides, and also to appear on the Bulger List of Washington’s highest 100 peaks. I had been struck by Clark’s glaciers while climbing Seven-Fingered Jack back in the pre-Doctor, pre-Dirtbag days, but have only now finally gotten around to climbing it. Both peaks can be done in a long-ish day from the White River trailhead, via a non-technical route with only modest brush-bashing. The hardest part is probably the long, steep side-hill between the two peaks. It might have been quicker and easier to descend Thunder Creek, but trails tend to get eaten quickly in the North Cascades, and I was not confident that I would end up on a use trail instead of an extended alder ‘schwack lower down. 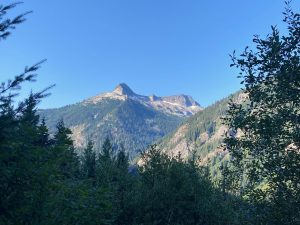 I should have started early for a long-ish day, but it was cold in the White River valley, the kind of damp cold that turns my hands stiff and stupid. It was also humid enough for all the brush to be wet. Neither the White River nor the Boulder Pass trail has been brushed out this year, so I got a thorough leg-washing crossing the slide paths along the River, and the soaking intensified once the Boulder Creek trail exited into the open. The cold and wet encouraged me to jog off and on along the river, pausing to admire its milky glacial tint and the big old cedars in the valley. I have grown used to steeper trails, so the endless, gradual switchbacks along Boulder Creek were unusually irritating. Unfortunately there was just enough deadfall in the open woods to make cutting them impractical. 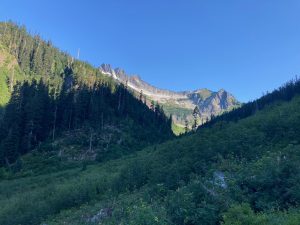 Boulder Creek was low enough to make for a dry crossing, but the stepping-stones were slick, making me glad to have branches to grab. I topped off on water, then continued wading through the brush toward Boulder Pass. The turnoff toward Clark is obvious — the unofficial trail seems to see about as much traffic as the official one to the pass. After circling across the valley, I finally reached my first sun around 9:30, and stopped to wring out my socks and insoles. Continuing along the well-built trail to nowhere, I immediately got another soaking before leaving the trail just before a stream crossing. The trail continues in steep, well-built switchbacks to the ridge near Point 6320+’, which may be a nice vantage point at the junction of Boulder Creek and the White River, but is a strange place for a built trail to end. Perhaps it was considered as a lookout site. 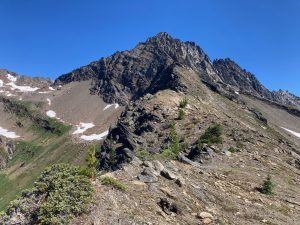 I headed up and back cross-country toward the unnamed spire southeast of Clark, reaching the ridge just below 7000 feet. Far below on the other side, I saw a large herd of perhaps 20 mountain goats, safely grazing in their inaccessible alpine pasture. The northwest side of this ridge is mostly sheer, but the goats (and occasional climbers) have beaten in a sort of path down the one break in the cliffs. I followed this, carefully edging down mud and choss, then made an ascending side-hill across the basin toward Clark’s south ridge. There is a sort of hump in the basin that holds some snowfields and provides flatter ground, making this section a good warmup for the full-on side-hilling to come. There were a couple of snowfields blocking the path to the ridge, so I headed more or less straight up the basin toward the summit, finding only a bit of class 3 here and there. 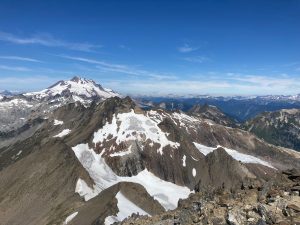 Like nearby Glacier, Clark is high and sits near the middle of the North Cascades. Summiting on a clear day, I could see everything from Rainier and Stuart to the south, to western outliers like Sloan and White Chuck, to eastern peaks like Seven-Fingered Jack, to Baker, Shuksan, and even Slesse around the Canadian border. It was a good reminder that while the North Cascades may be complex, they are not large. I also saw the small Moe Fire, which I had first spotted from Kyes, still smouldering away to the south, promising more smoke once the hot, dry weather returns. 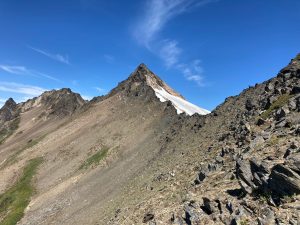 The traverse to Luahna turned out to be annoying. I descended southwest a bit, passing two remarkable scrub pines growing above 8500 feet, then cut down a garbage chute to lower-angle terrain north of the peak. I returned to the ridge to see if I could traverse the glaciers east of the ridge, but the snow was too hard and steep for me with no crampons. So I was forced to take the normal east-side route, an endless side-hill around a subpeak along the way (aptly described in Alden Ryno’s trip report as “low-viscosity sand and scree”). There is an easier way to Luahna’s summit if one continues traversing up the east side, but I cut back to the ridge and finished that way, with a bit of exposure and fine views of the glaciers below. 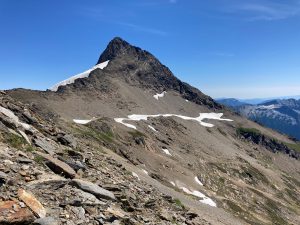 Some small part of me had contemplated traversing on along the Dakobed Range, but it looked far and hard from Luahna, so I almost immediately abandoned that thought. Instead I reversed the side-hill, which was just as annoying, but at least balanced the asymmetric use of my legs. Once past the subpeak between Luahna and Clark, I followed a flatter line holding some permanent snowfields, then crossed Clark’s multiple west and southwest ridges. The terrain felt like it might cliff out in the steep gullies between them, but following the natural line and looking for goat prints turned out well. 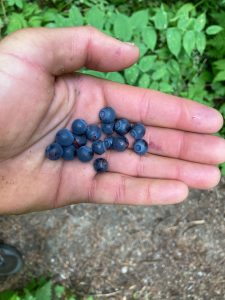 Back on familiar ground, I returned to the access gully to Boulder Creek, picked up a faint trail on the other side, then rejoined the trail system after a bit more cross-country. I grabbed some water just before the Boulder Pass trail, then started having less fun than I had hoped on the descent. The upper part is often too overgrown to run, since the footing is uneven and you often can’t see your feet. The parts in between are obnoxiously flat, and I was tired enough to trip and face-plant a few times. I cut a couple of the switchbacks in the woods lower down, more to express my frustration than to save time, then hike-jogged the White River trail back to the car. The blueberries were mostly ripe, so I stopped frequently to pick some despite their having very few calories compared to my half-dozen PB&Hs and four Clif bars. This trailhead is blessed with no fewer than three trails, so I decided to make my drive worthwhile by exploring another one the next day.

Twisty rock on the way to Clark