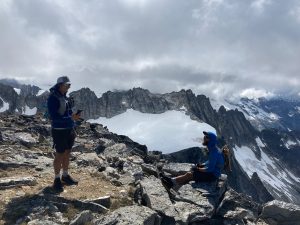 [This is way out of order, but better late than never. — ed.]

The Inspiration Traverse is a route through the heart of the North Cascades, crossing the Inspiration, Klawatti, and Austera glaciers. While probably more popular as a spring ski, it can also be done as a summer mountaineering trip providing access to five of Washington’s highest hundred peaks: Eldorado, Dorado Needle, Klawatti, Austera, and Primus. It can be done either as a point-to-point route from Eldorado Creek to Thunder Creek, or as an out-and-back. I had previously done all of these peaks, collecting them piecemeal over three outings, but it is possible to do them all in a day with sufficient motivation. Jason’s crazy quest to summit all the Bulger peaks in around fifty days finally gave me the motivation required to bash through devil’s club by headlamp and spend hours slogging across glaciers.

We had agreed to meet at the newly-reopened Eldorado trailhead the night before, but I did not see Jason when I pulled in after dinner. He finally arrived just before dark, having been delayed by his film crew (?!?) on a less-than-exciting outing to Mount Formidable. Knowing we had a long day, we agreed on a slight headlamp start, then I quickly went to bed and tried to get some sleep. Headlamp starts are rarely necessary with the days still so long this far north, and can even be counterproductive when, as in this case, the first part of the route involves bushwhacking, but I saw the need. I was surprised and a bit concerned when Jason told me his friend Anders was coming along, since he is mostly a Colorado guy without much Cascades experience, but he ended up handling the distance, scrambling, and glacier crossings without trouble.

We started out by headlamp, heading back down the road past the new washout and the sadly destroyed old log, crossed the new logjam across the main channel, and plowed into the brush toward the remaining ones. The new way is much less pleasant than the old, but it is already becoming beaten in. There were two minor thickets of devil’s club to manage, but we found dry log crossings, and were soon on the other side and above the swamp. Heading back upstream, we found the “unmaintained climbers’ trailhead” sign and were back on the well-defined Eldorado trail. 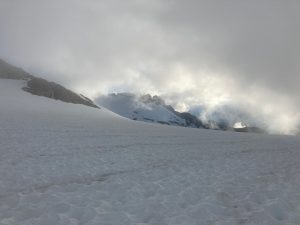 The trail, then boulders, then more trail went as usual, though Jason was dragging a bit after going almost non-stop for a month and tagging 78 peaks. The snow on the upper section before the crossover had melted out quite a bit since my last visit, but it was also cloudy and much earlier in the morning, and I was unpleasantly cold wearing all my layers. The normally inspiring view of Johannesburg was missing, and I was worried my hands would be painful and useless once we crossed onto the glacier. The clouds would remain for most of the day, and I would actually appreciate them, as there were no easy water sources on the glaciers, and the day would have been hot and desperately thirsty in the sun. 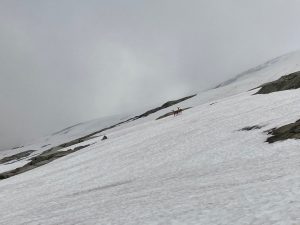 The snowfields and glacier leading up to the ice cap were soft enough that we did not bother with crampons. Near the base, we saw two animals bounding up much higher. They looked like deer rather than the expected mountain goats, and when they returned from their lap to the glacier, they bounded close enough to make that clear. I have no idea what they were doing, as there was nothing for them to eat up there, and I am not used to seeing deer running around on snow in the summer. It was Eldorado, so there was the usual cluster of tents at the rock ridge, one containing another Jason known to Jason. 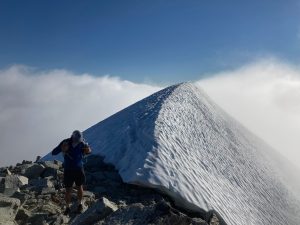 None of us had put on crampons yet, so we carefully sketched our way up the bootpack, then bypassed a steeper section on the bare rock to its left. We crossed the summit snow arete, then hung out for awhile on the rock beyond, where I found the bench I had built still intact after 5-6 years. Summit documentation complete, we put on our crampons for an easier descent, then cut across as soon as we were below the major crevasses, following an old bootpack that fortunately led to the Inspiration-McAllister glacier saddle. 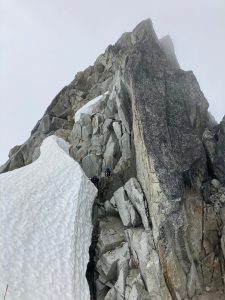 We were still in the clouds, and I remembered the McAllister Glacier having some sketchy crevasses, but fortunately the bootpack led us right to the base of Dorado Needle’s summit scramble, taking a long detour past it before returning near the ridge. This is not the route I took when I first climbed it, but the ubiquitous rappel garbage showed that many parties had been using it. The first trick was getting from the snow to the rock. After examining a big, gritty rock step at the base of the ridge, I looked along the snow until I found a short jump to a flat ledge, which was safe but felt dicey in crampons. We each jumped, then stashed our snow gear for the scramble. 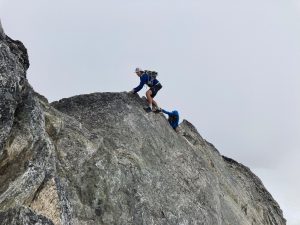 Jason had heard that a block had broken off in the last few years, creating a short crux somewhere between 5.7 and 5.9, which concerned me. The first part, getting up the left side to the ridge, was no harder than scrappy low fifth. From there, a short steep climb led to a wonderful hand traverse, then one more steep step and a slightly convoluted a cheval or hand traverse to a flat spot. Here we found the apparent crux, an angled fist crack leading up a ten-foot vertical step. I tried it first, and after a bit of experiment, hugged the block right of the crack, jammed a foot, step up onto a feature on the right, grabbed the positive edge on top, and was done. It was definitely not 5.7, much less 5.9. Jason and Anders followed, with Jason having a brief moment of panic before he managed the sequence in his non-sticky steel-nubbed shoes. We took in the lack-of-view, then scrambled back down to our snow gear and returned to the glacier.

We retraced our route back to the Inspiration Glacier, then followed another bootpack on a high traverse toward the col between the Tepeh Pillars and Klawatti. I did not remember which was the easiest to its summit, but fortunately Jason had some tracks on his phone, from which we learned that we should climb the ridge from our col, starting to the right. After some initial sketchiness, it was class 2-3 boulders to the summit, from which we had the usual view: glaciers and a lake below, and nothing more than a few hundred yards away at our own level thanks to the persistent clouds. 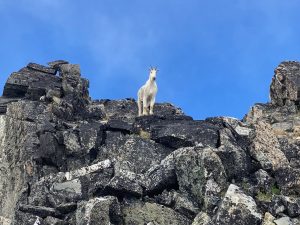 From Klawatti, we went around to the north and down the familiar and spitefully tricky step on the east side of Klawatti Col, then continued on glacier to Austera’s rocks. There we were met by a mountain goat, calmly checking us out and waiting for someone to pee. He backed off when we headed for the summit, watching from the east slope as we scrambled around into the notch and made the couple of fifth class moves required to reach the summit. Returning to our snow gear, we left some pee for the goat, then returned to snow for the long detour around Austera’s east ridge. 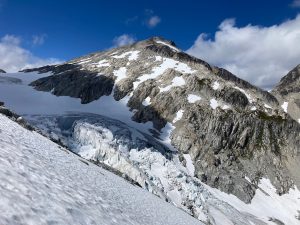 This part of the day was new to me, and I dreaded it. Primus is only a straight mile north of Austera, but the Primus-facing sides of Austera’s northwest and east ridges are steep and mostly loose. The only reasonable way to get around to the North Klawatti Glacier and Primus is to lose about 1000 feet to get around the east ridge’s toe. This went quickly on soft snow, but all the while I was dreading the return. Turning the corner, we found the glacier to be straightforward and well-behaved. We crossed the flat part, then gained Primus’ south face where the glacier became steeper and broken. The face looks like a choss nightmare from across the way, but was actually not bad, with plenty of slab sections, and mostly stable talus. In far less time than I had feared, we were on the summit. 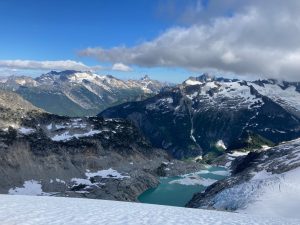 We could have dropped to Thunder Creek and exited to Ross Lake, but we couldn’t get in touch with Jason’s support vehicle, and it would be more scenic and only slightly slower to return across the glaciers. We stitched together snow-patches on the way down Primus, then trudged around the foot of the ridge, switchbacked up the other side, and made a long traverse to Klawatti Col, where we were back on our outbound route. The clouds thinned enough to offer some views, and fresh boot-packs made travel easy across the Inspiration Glacier. From there it was a slide down to the base of Eldorado’s glacier, then a downhill death march to the Cascade River. When it became apparent that we would return right on the edge of headlamp time, Jason found some energy somewhere and bushwhacked ahead like a mad man. We ended up following the route I had found returning from Austera, our feet staying mostly dry on the way to the new logjam, then trudging up the road to the parking lot. Anders had all sorts of delicious food in his van’s fridge, and generously shared chili, potatoes, and cheese with Jason and I before they drove off and I settled in to sleep another night at the trailhead.

Spotlight across the Cascade River