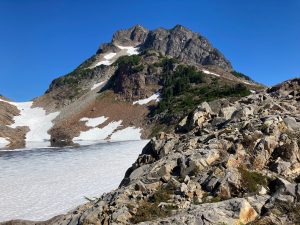 Del Campo is the highest peak above Gothic Basin, a popular camping area near Barlow Pass on the Mountain Loop Highway. Lying west of the main mass of the Cascades, it has views of the high Cascades from Baker to Rainier, its fellow outliers like Sloan and Three Fingers, and even Puget Sound and the Olympic Range to the west. Having driven the annoying dirt road south from Darrington, I decided to amortize the time and gas by spending a few days in the area. I knew the area would be crowded on a Saturday, but figured I would be in and out before things got out of hand. 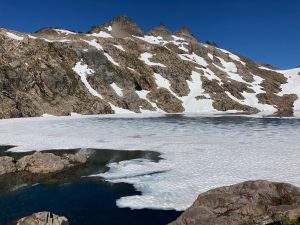 I drove over to the Barlow Pass trailhead, which was already nearly full before 7:00 AM, finished my coffee, and started along the old railway bed toward the ghost town of Monte Cristo. I could have biked this, but it wasn’t worth the trouble to save only about a mile of road-walking. While the railroad continues up the South Fork Sauk River, a well-used trail follows Weden Creek, then switchbacks up the steep hillside to Weden and Foggy Lakes. Like all good Cascades trails, this one is consistently steep, occasionally very steep, and crosses cascading and eroded streambeds sometimes containing large pieces of snow. A sign at the trailhead warned about collapsing snow-bridges, and I imagine more than one novice hiker has fallen victim to them on this popular route. 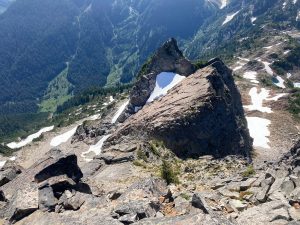 There were already several tents near Weden Lake, where the snow became more consistent. I crossed a mixture of snowfields and slabs on my way up to Foggy Lake, then found a trail around its right side. Since I had not planned to tag this peak when I drove down to Vesper, I had no route description and only a low-resolution map with 50-meter contours, and was forced to actually look at the mountain and figure out a plausible route. I settled on approaching on the right shoulder, then crossing a snowfield and hopefully ascending a gully to the right ridge higher up; this fortunately turned out to be the standard route, as evidenced by some fresh boot-prints in the snow.

I climbed a loose gully to a notch in the ridge, made a few exposed third class moves to get around to the east face, then enjoyed some easy third class scrambling up ledges to the summit. I found a seat to enjoy the views of nearby Vestal to the west, Sloan and Glacier to the northeast, and even high Stuart far away to the southeast. Unfortunately the summit was also a meeting-place for flying ants, so I did not feel like staying long before retracing my route. I could have climbed Gothic Peak as well, but was out of food and not too excited about the lesser summit, so I simply headed back down the trail. The tourist hordes marched up in twos and threes, except one group of a dozen attractive young people who seemed to be part of some college outdoor group. Hike-jogging the road back to the car, I decided to stay another day and use the bike I have been carrying around all summer.