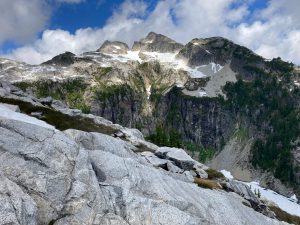 Thornton Peak sits above the Thornton Lakes, between Triumph and Trapper on the ridge west of Goodell Creek. I had climbed both of its neighbors from the high Thornton Lakes trailhead, and had half-hoped to climb the more impressive and remote Mount Despair. But a combination of laziness and big plans for the next day led me to settle for Thornton, a much more modest goal. 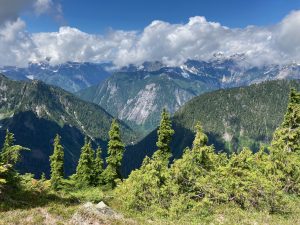 Taking advantage of the high trailhead, I got a slightly late start, hiking the flat continuation of the old road, then making my way up the steeper trail toward the lakes. I passed a couple of parties who had started while I was drinking my coffee, then had the trail to myself until the saddle south of Trapper. Here I met an older man on his first backpack since injuring his back. It was going well, and he planned to drop his overnight pack to take in the view from Trapper before heading home. He had clearly been hiking and scrambling in the area for years, and when I told him that I planned to climb Thornton, he gave me some helpful information about the route, cautioning that it would be “a big day.” 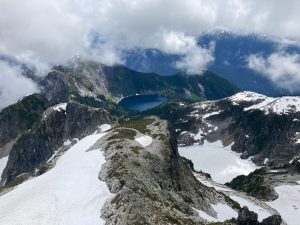 From where I met the man, I dropped several hundred frustrating feet to the lowest lake’s outlet, where there is a campground, then continued through a maze of use trails toward the second lake and the broad ridge leading to Thornton’s south side. I had come this way for Triumph before, but still managed to lose quite a bit of time following various false trails. I finally found one that worked, which stayed low toward the second lake, then turned sharply uphill on the right edge of the ridge, marked by intermittent cairns. Once it emerged from the woods, the cairns became unnecessary, and I followed the easiest path up slabs, grass, and snow to the narrowing crest, where all trails converge. 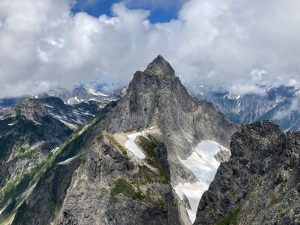 I cut under the bump where the ridge turns north, crossing a snowfield and climbing some third class slabs, where I found an unnecessary rappel anchor. From there, I followed more bits of trail along the crest, then dipped right under a subpeak where the trail presumably went left to traverse toward Triumph Pass. Following the beta I had learned earlier, I traversed the left snowfield below Thornton, then found an easy scramble up the rock rib separating it from the right one. From there, a bit more scrambling along the east ridge led to the summit. The register was an interesting mix of people doing Big Things like traversing from Triumph, turned back from Big Things like Triumph’s northeast ridge, and enjoying an obscure peak for itself. Clouds unfortunately obscured many of the surrounding peaks, but I did get a brief, clear glimpse of nearby Triumph in all its pyramidal glory.

I retraced my route on the return, slightly botching the descent between the middle and lower lakes, then put myself on autopilot for the trail. I met a steady stream of people coming the other way, either day-hiking or intending to camp at the lake. Even on a weekday, such an accessible area of the western North Cascades can be crowded.