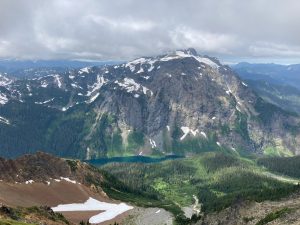 Tomyhoi is an odd-shaped peak on the opposite side of Tomyhoi Creek from American and Canadian Border Peaks, with cliffs surrounding a broad plateau around its summit crest on most sides. It is a moderate scramble from the Yellow Aster trailhead, and while not exactly popular, it has a reasonable use trail most of the way. I needed an easier day after thrashing back from American Border Peak, and Tomyhoi was convenient. Unfortunately it was cloudy most of the day, so I did not get to see much of its surroundings.

I drove the short distance down to the trailhead, once again ignoring the “fee area” signs, and hiked back up the trail I had descended the previous afternoon. I turned left where the trail splits toward Tomyhoi Lake, making a long, gradually-ascending traverse under Yellow Aster Butte’s three summits. This was a pleasant section of trail, crossing mostly open ground with views of Baker and Shuksan peeking out of the clouds across the valley to the south. Where the main trail finally turns back northeast to climb to the butte, I took the less-used spur down to a plateau dotted with mostly-frozen tarns, where I met a couple packing up their cold camp amid the snow, ice, and mud. Why do people do that?

I continued following a fading trail along the undulating ridge, finding a bit of easy class 3, but no real difficulties. The only trouble was toward the very end, where one must cross a small glacier on the east side to avoid some gendarmes on the ridge. I had left my crampons in the car, so I had to exercise some caution crossing the snow with an axe and running shoes. I also went too far, making the snow steeper, the moat deeper, and the rock more challenging than necessary. After getting back on-route, I found the final class 3 scramble to the summit easy by comparison. I had no views on the summit, so I only stayed a few minutes before following the trail back to the correct glacier crossing, which skips only the first couple of gendarmes by crossing 100 yards or so of snow. From there, I had an easy hike/jog back to the car, then a drive back south to Highway 20 with a stop to resupply before heading into the food desert. 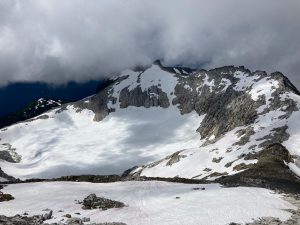 Looking for an easy day near Marblemount, I noticed Teebone Ridge, which extends from near Monogram Lake to Big Devil southwest of Newhalem. Access to the Big Devil (north) side involves a boat and a terrible bushwhack, but the Little Devil (south) side has a convenient trail to about 5000 feet on the way to Monogram Lake, most of which is shared with the popular hike to Lookout Mountain. My plan was to go at least as far as Little Devil, and then to continue on toward Big Devil as far as I felt.

I got a late-ish start, soon passing the two parties that had started ahead of me while I finished my coffee. Most of the trail is through open old growth forest, but I was grateful for my long pants as I bashed through the open area with miscellaneous brush including nettles. Above, I left the well-used trail to the lookout, finding the Monogram Lake trail somewhat rougher but still in good shape. I briefly lost it in some avalanche snow below an open bowl, but soon found it again, and spotted the use trail up Teebone Ridge right where I expected it on the next shoulder.

This “trail” was steep, with bits of scrambling, but still easy going. After an initial steep climb, the ridge flattens out, with cliffs to the left and a grass-and-boulder slope to the right leading down to Monogram Lake. I stayed on or near the crest, finding easy travel and few undulations. Things got a bit trickier where the ridge turns north at an unnamed summit before Little Devil. There is a small glacier nestled on the ridge’s east side, and both sides become fairly steep. I had read that one can cross the glacier, but that would require losing a lot of elevation, so I stayed generally east of the ridge crest, finding some boulder-hopping and enjoyable class 3 scrambling on good gray granite.

The rock turned to black choss at the (formerly glacier) saddle below Little Devil, and I made a final choss-slog up to the twin summits. One highpoint is easy to reach, while the other is a Sierra-style balanced block. I walked over the first, then dropped my pack to tackle the second, which involved a couple low fifth class moves on its south side. I had plenty of time, but the ridge continuing to Big Devil looked less pleasant than what I had seen so far, so I took a 30-minute nap at a flat spot, then retraced my route. The Lookout trail descent was fun as always, with soft, mostly smooth footing and a steep but reasonable grade. I had a late lunch at the shady parking area, then rolled into Marblemount for internet before preparing for bigger things.

Big Devil and other points