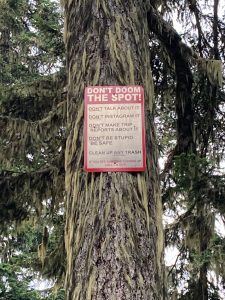 [While writing this violates the letter of the local law, I believe it keeps with its spirit.] 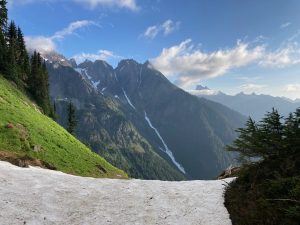 Canada’s seemingly eternal closure, even to those fully vaccinated, has caused me much irritation this summer, as there are plenty of peaks up there I want to climb, and I will likely be far away if the pandemic has settled down by next summer. However, I hoped to engage in a bit of international crime by tagging Canadian Border Peak, lying less than a mile into the Great White North west of Mount Slesse. The peak is at the northern end of a ridge that includes Mount Larrabee and American Border Peak. I had hoped to traverse all three peaks, but the first two proved much harder than I had anticipated. I therefore found myself turned back from Canada not by armed and masked Mounties, but by savage choss. 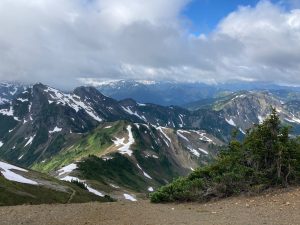 The Yellow Aster Butte trailhead is yet another fee area, so I parked halfway between there and Twin Lakes, which made sense since I was planning a loop hike between the two trailheads. I got a reasonably early start, hiking the steep 4WD road to the lakes and meeting a couple of people coming down in more capable vehicles. There are two trails out of Twin Lakes, one heading down to Silesia (Slesse) Creek, the other up to Low and High Passes. I took the latter, which crosses a shoulder, then traverses down and around to gain the ridge south of Larrabee at Low Pass. From there, the trail continues to High Pass, then splits, with one branch heading left to an old mine, and the other dead-ending at some more mining debris on Larrabee’s southeast ridge. The peaks had been in and out of clouds all day, and while they did not threaten rain, then did obscure the route ahead, both complicating my route-finding and protecting my eyes from the discouraging choss to come. 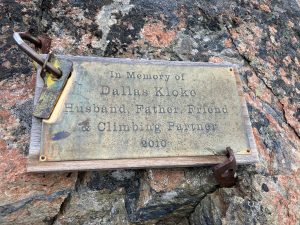 The easiest way up Larrabee is probably the southwest ridge, but I found a plaque memorializing a dead climber on the southeast one, and figured that it, too probably went. [The climber, Dallas Kloke, was actually a well-known local and author of several guidebooks, who died at the age of 71 falling from the Pleiades, just east of Larrabee. — ed.] It turned out okay, and I even found a cairn or two and the occasional apparent boot-pack, but the gendarmes and stretches of low-fifth-class choss were harder than I had expected, and made this “warmup” peak slower than I had hoped. Reaching the summit, I caught occasional glimpses of a glacier far below to the northeast, and of the first part of the ridge north to ABP, but not much beyond that. I took the time to download some map tiles, then headed off along the ridge. 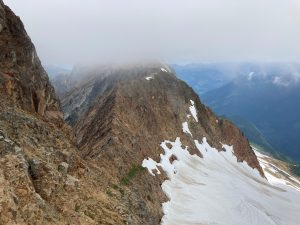 This ridge turned out to be mostly time-consuming and tedious. The east side, recently cut by glaciers, is rarely useful, and the west side has several spur ridges and is often steep, so the crest is usually the best path. However it has numerous towers, which sometimes forced me to one side. The worst was probably a sizable subpeak with a goat sleeping area just to its south. I looked at the right, where the goats go, but it was steep, hard dirt with a bad runout. To the left, I descended some snow, then traversed a rib and did a few short stretches of low-fifth downclimbing to fight my way back to the crest. 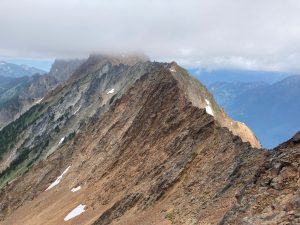 The ridge improves somewhat closer to ABP, changing from reddish choss to some white, harder rock (granite, perhaps?), but unfortunately this does not continue to the summit. The peak has a subpeak to its south, with sheer north and west sides. I traversed around the east, then checked out the prospects of continuing the traverse and finishing up ABP’s southeast face, but that looked unlikely. Instead I retraced my steps a short ways and climbed back to the notch with the subpeak, since it seemed likely that things would go better on the ridge crest. 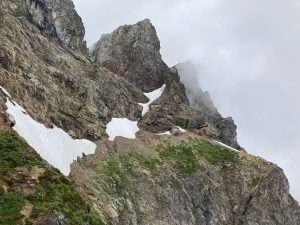 From the notch, I climbed a steep ramp to the right that dead-ended a short ways below the ridge. There appeared to be two ways up to the ridge: a burly lieback/mantle up a big flake to the left, and an exposed dirt-and-choss traverse around a corner to the right. I found an old piton at the bottom of the flake, but lacked the cojones to make the moves. The choss traverse was not appealing, either, but after my body encouraged me to unload some ballast, I found a sequence of cautious moves that worked, and got me to safer ground. From there, class 4-5 terrain got me back left to the crest where, as I had suspected, things were easier. I made my way through some big granite blocks, passed a surprising tent platform, then continued boulder-hopping to the summit. I later looked at the route description I had downloaded and ignored, and found that very little of it corresponded to what I had seen or done. Oh, well… there was a piton, so at least a couple other people had been my way.

Not really wanting to reverse what I had done, I continued traversing toward Canada. This started off well, and I even saw some old boot-prints in the snow; I was finally feeling optimistic about getting into Canada. Alas, the smooth going ended at a sheer notch extending well east toward the glacier below. The west side was still vertical, and careful exploration uncovered nothing I would like to climb to get into the notch. Fearing a nasty and demoralizing backtrack, I traversed back along the east side, finding ledgy slabs that I could use to make my way back down and north. 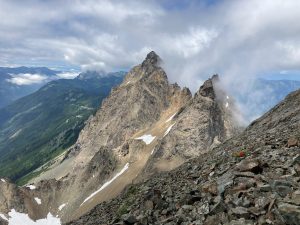 But once again my budding hope was crushed, this time by a cliff in the final few hundred feet above the odd three-way saddle between ABP and CBP. I saw no direct downclimb, and it seemed unlikely that I would be able to reach the glacier to the east. However some instinct told me to traverse around the west side into a bowl in the otherwise-vertical face. Here I found more broken and promising terrain, where I finally made my way to the snow and talus below, passing a possible cairn above a final steep, diagonal downclimb. 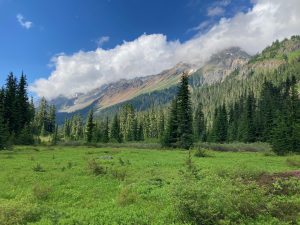 I looked over at CBP, now only a short distance away, but lacked the will for another choss-battle. I had seen the clear-cut border swath to both sides, but as far as I can tell I was stopped just feet from Canada. In retrospect, turning back was wise, because the terrain between north of ABP and the trail from the south end of Tomyhoi Lake was horrid. Perhaps I should have stayed high and traversed to somewhere near High Pass, but I did not. Instead I diagonaled down endless loose talus to treeline, then contoured south there through the bowl west of ABP. Past that, I dropped through talus fields and mostly open woods to the shore of Tomyhoi Lake. I had hoped to find a rocky beach or something, but instead found only hellish alders. I retreated to the woods, then made my way south. The woods themselves were fairly open and pleasant, but they were cut by numerous slide paths and deep-gullied creeks. My pace went from miles per hour to hours per mile as I cursed and thrashed my way toward the trail. Once finally on trail, my energy returned and I fast-hiked up to the pass, then ran the more popular Yellow Aster Butte trail back to the other trailhead. One short road-hike later, I returned to the car to spend another night and do an easy nearby peak the next day.

Border swath from near ABP