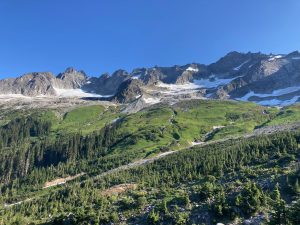 The Torment-Forbidden traverse is a Washington classic that has been on my radar since at least 2014, when I tagged both separately after being defeated by a moat. This time I skipped Torment and the moat-ful part of the ridge, completing what I feel is enough of the ridge to count as having done the traverse. Along the way, I learned that what most people call Forbidden’s “West Ridge” route actually skips most of the long ridge from Torment, climbing only the last 500 or so vertical feet. (This reminded me of the Eiger’s Mittellegi Ridge route, which skips most of the peak’s long west ridge; both confused me.) While the best climbing is on the short “West Ridge” section, the entire thing from Torment is worth doing, with some fine knife-edge sections, and generally rewards the climber for staying on the crest. The rock is mostly solid, relatively free of lichen, and angled to provide nice positive holds. 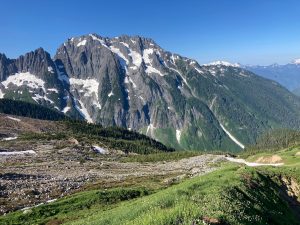 Hearing that both the traverse itself and Boston Basin below it can be unbearably crowded, I have been reluctant to return and finish the job. The road closure was therefore a welcome opportunity to do so. I slept at the Park boundary, then rode farther up the road to the spot where there are normally several cars parked in questionable ways. Now I was pleased to see only two other bikes locked to a tree. I hiked the approach trail, which follows an old mining road for awhile before bashing straight uphill, then joining what looks like an old mine trail. The abandoned road is, like so many others, an anti-road: cutting the trees lets in sunlight, which is eagerly soaked up by alders and devil’s club. However, enough climbers bash along and next to it to maintain an open path. The stream crossings higher up, which had caused others problems during the preceding heat wave, were tame. 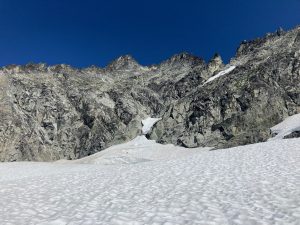 Abruptly emerging into the basin, I followed the main trail to a large camping area, finding only two tents. Beyond, I lost the trail for awhile, then picked it up again and followed it to the snow, where I found some boot-prints heading in more or less the right direction. I wasn’t sure how low I should traverse to Torment, so I followed the prints along an ascending traverse toward a spur ridge. I passed two guys going down, who told me they had done the West Ridge the day before, sleeping at the “normal bivy.” Not realizing that they had done the short route, I followed their tracks for awhile, then turned left when they were clearly headed in the wrong direction. 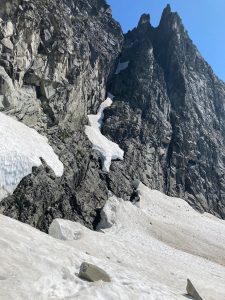 I turned out to have made only a bit more work for myself than necessary. I crossed through an obvious gap in the ridge, where I had no trouble getting onto the next glacier. I descended a small crevassed bulge, traversed around another minor rib, and was again on-route headed toward the couloir southeast of Torment. The couloir itself was a mess, with broken snow and outward-sloping sandy slabs beneath, and the bergschrund below was almost completely open, with only a decorative snow bridge remaining on the far left side. I dithered for a bit, morale low, then decided to explore a gully with two chockstones leading up and right from the ‘schrund. 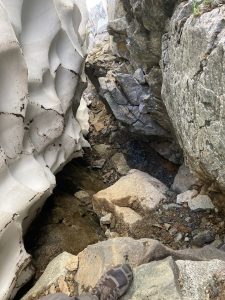 I made my way across some snow debris on the far right and, after a bit of experimental sketchiness, found a way over the exposed rock on its left side. My gully had a section of steep, shaded snow below each chockstone. I suppose I could have put on crampons and gone up the snow, but I chose instead to scramble along the rock to the left of the first, then tunnel up the moat where the wall became impassable. This required some classic groveling, hacking in my axe with my right hand, grabbing gritty protuberances with my left, and searching for footing in the mix of mud and debris between the snow and rock. Reaching the top of the snow, I went around to the right, then up some outward-sloping slabs to avoid the chockstone. I handled the second chockstone with similarly inelegance, going around the right side of the snow, then under and behind the chockstone. With a shout of relief, I found myself on grass ledges just below the ridge. Finally, I could begin the climb. 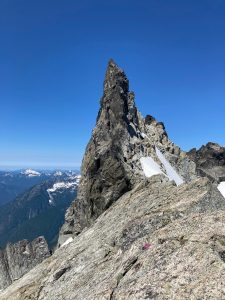 Go right over the top

From the notch where I reached the ridge, I traversed another moat to its north side, then climbed the cleaner, blocky rock there to gain the crest. I generally found that the left (north) side was cleaner and better climbing, with the right being temptingly gentle but outward-sloping and mossier. Once on the crest, I found time-consuming climbing along an improbably narrow knife-edge, with the occasional piece of Cascades tat telling me I was on-route. The knife edge cliffed out at the end, forcing me to retreat slightly and traverse left. 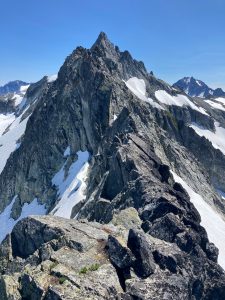 Ridge from near start

At the next headwall, I suspected another cliff and did not even look for a direct route before traversing right. This turned out to likely be a mistake, leading to some forgettable traversing along slabs and through a moat, then sketchy vegetable climbing to regain the crest. Assuming there was a way directly up or just left of the headwall, the ridge looked more enjoyable, and did not cliff out. Chastened, I stayed near the crest the rest of the way, including on a steep knife that looked like it could not possibly be low fifth class. However the rock is solid, with sharp, positive holds, and as long as you don’t mind the exposure, the climbing is a joy. Along the way, I removed most of the anchors (“climber garbage”), stuffing them in my pack or wrapping them across my chest. 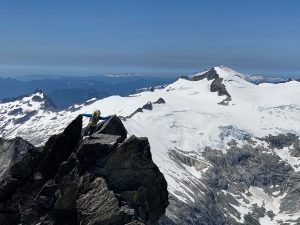 I reached the summit just after two guys from Seattle who had just climbed the north ridge. I immediately put my foot in my mouth by grumbling about the “Seattlites” who normally crowded the peak, but they remained friendly enough. They planned to descend the west ridge for some reason, so I offered them some of my collected tat, which they politely but foolishly refused. I enjoyed the summit for a few minutes after they left, then took off in the other direction, planning to descend the ledges I had climbed in 2014. I didn’t remember the route being particularly hard to follow, and none of the terrain was hard, but I stayed too high this time, wary of descending to the Boston Glacier, and had to do some backtracking. 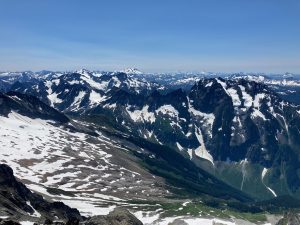 Finally reaching the notch to cross back to the Boston Basin side, I saw two guys descending just ahead of me. They were carrying gear and wearing boots, so I figured I would pass quickly by. However they also seemed to know which gully to descend, and to be moving well, so I decided to follow for a bit. We struck up a conversation, and after a little while one of them asked me “what’s your name?” When I told him, he excitedly exclaimed to his partner “it’s seano!” Whoa… Since I don’t take many selfies, and mostly stick to my little corner of the internet, I am rarely recognized in the mountains. It turns out that I sort of knew the guy who recognized me as well (JasonG), as I have read and benefited from several of his trip reports.

The three of us stayed together down the snow and across the basin to the woods. Both were skillful boot-skiers, and had no trouble keeping up with me on the snow. However, their boots and overnight packs were more of a hindrance on the woods trail, and I was going to leave them behind anyways once I reached my bike, since they had hiked the road, so I took off jogging. Just as I was unlocking my bike, three female rangers passing on the road stopped and asked for my permit without a “hello.” I explained that I was day-hiking, which does not require one, and that this was one of the many reasons I prefer not to camp. They mulled that over for a minute. I thanked them for keeping the road closed to cars, then sped off on my bike. The ride down was the perfect end to the day, cooling me, drying my sweat, and giving me a chance to unwind and reflect while enjoying effortless speed. I decided to stay another day, and sat in the car looking for a peak to use as an excuse.

Finally on the ridge

Ridge from near start

Go right over the top