Austera is one of Washington’s highest 100 peaks, and while not particularly remote by Cascades standards, it is the hardest to reach of the major peaks around the Eldorado ice cap. This area contains two of the range’s most spectacular glaciers, the McAllister and Inspiration, and given its easy access, it is currently being loved to death by Seattle’s burgeoning techie hordes. I first visited in 2010, tagging Eldorado, Klawatti, and Dorado Needle; I should have included Austera in this trip, but was naive and new to the Cascades. The modest use trail I found a decade ago is now a badly-eroded trench, overcrowded even on weekdays. 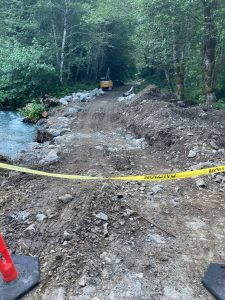 A fortunate flood destroyed the Cascade River Road just before the Eldorado access trail this year (as well as the decades-old log to cross the river), and the Park Service decided to close the road at the Park boundary, two miles farther down the road. Figuring that this would thin the crowds, I stocked up on food, drove up to Marblemount, then bravely continued up the road. There were perhaps a couple of dozen cars parked just below the gate: too many, but a fraction of the normal hordes trooping into Eldorado, Forbidden, and Cascade Pass on a Saturday. I rode my bike the short distance to the new log crossing, surprised not to see any others, locked it up, and started my hike only slightly delayed.

The original crossing logs were huge old-growth things that had stood in place for perhaps fifty years or more (they are mentioned in previous versions of Beckey’s guide). Thousands of climbers’ boots had worn them flat, and also worn paths in the swamp on the far side. The new crossing is far less pleasant and established: after crossing the main channel via one awkward jam, climbers have found a variety of ways across the others and through the surrounding swamp, most involving close encounters with devil’s club. 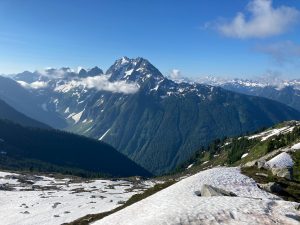 Eventually the bootprints became faint trails, which merged near the “backcountry route” sign and the old, well-defined path. I lost this again in some downed trees, then found it farther uphill, even more beaten-in than I remembered. I made my familiar way up to the talus-fields, then up the three of them, following occasional cairns and bits of trail to one side or the other. I passed the first people near where the trail crosses a stream above the talus, a couple with incongruous day-hiking gear. I crossed the ridge to the glacier, finding only a single tent at its base. So far, so good: I had expected more tents from people hiking up Friday afternoon, and more day-hikers as well. 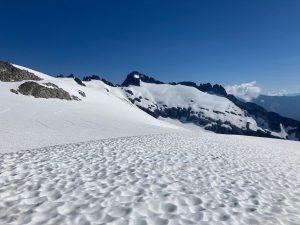 I made my familiar way up the glacier, stopping at a runoff stream to freeze my hands and get water, then continued to the ice cap. It had been too long since my last visit to notice any particular details of the glacier’s inevitable retreat, and in any case, it was still early enough in the season for much to be hidden by snow. Crossing to Eldorado’s east ridge, I at last saw the crowds beginning, with one independent group and one guide-y-looking one roping up to begin the walk up Eldorado. I waved as I passed, eyeing my line through the crevasses around the cirque toward Klawatti. Like a decade ago, this was the most crevassed part of the route, but not too difficult if one pays attention. 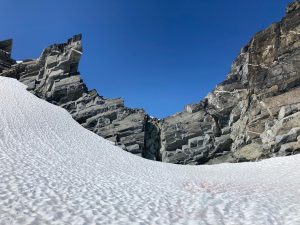 Rather than going right to climb Klawatti’s south side, I went through the gap and continued across the McAllister Glacier’s east lobe a short distance to Klawatti Col. This gap turned out to be more of a barrier than it appeared: on the near side, what looked like a simple snow col was a twenty-foot wind-sculpted fin, steep on the back. On the far side, there was thirty or so feet of low-fifth-class rock dropping to the Klawatti Glacier. I examined the cleft in the center, then carefully descended the right-hand side, below where someone had left a rappel anchor. After a few delicate moves on slabs, and a careful step and mantle across the moat, I was once again on easy snow. 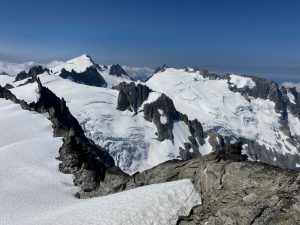 This was my first visit to the Klawatti Glacier. Much smaller than the Inspiration and McAllister, it falls in a crevassed quarter-circle to the still mostly-frozen Klawatti Lake. Fortunately I was on its gentle upper reaches, traveling north next to the ridge connecting the col to Austera. I worriedly eyed a tower to the left, which looked like the highpoint, until I climbed a steeper bulge and saw a slightly higher talus blob ahead. Then Austera’s true summit revealed itself, two points along the ridge north of the blob. To the left, I could see nearly the entire McAllister Glacier, its two upper lobes falling in broken cascades to nearly meet in an ice plane down around 5,000 feet. I recognized the blob of hanging glacier north of Dorado Needle that had first impressed me a decade ago. 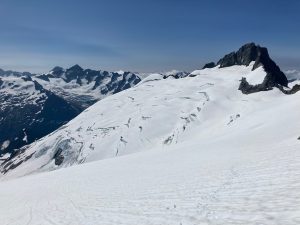 My route description called the final climb fifth class, possibly as hard as 5.7, but at least it looked short. I made my way along the broken ridge to the summit pinnacles, then looked right for a “narrow ledge,” instead finding an easy traverse. Around the back, I found easy scrambling to the summit of the first pinnacle. A few moves of awkward downclimbing got me to the notch, where I found the inevitable rap tat around a chockstone. To the east, a head-high tongue of hardened snow filled the gap, leaving a moat on either side. The first couple of moves out of the notch might have actually been 5.7, but they were low-consequence, there were only two of them, with smears for the feet but positive holds. Above, easier positive climbing led to the summit.

I cleaned up the rappel garbage, found no register, then sat down to enjoy the view. A jagged line of towers extends north, forming the east side of McAllister Cirque, mirroring the towers north of Dorado Needle. Primus and Tricouni lie to the northeast, the former looking like a particularly unappealing talus-mound. On the other side of deep Thunder Creek to the east, I recognized glaciated Logan and the dry choss-peaks of Ragged Ridge. To the southeast, Goode rose above its surroundings as a singular, narrow wedge.

I had a straightforward time retracing my route. I briefly tried climbing the lowpoint of Klawatti Col, first by the broken left face, then by the right dihedral, then thought better of it and reversed my course on the left. I followed my track back across the Inspiration Glacier, since it had worked for me on the way out. Near Eldorado, I passed a group of four older men roped up with heavy packs, on their way over the Inspiration Traverse, crossing the ice cap from the North Fork Cascade River to Thunder Creek and Ross Lake. I gave them some pointers, then trudged back across the flats to the descent. 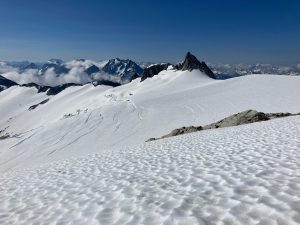 Point 7,733 is a striking landmark along the standard Eldorado approach, one I had meant to climb on both my previous visits, only to lack the drive. This time I addressed that failure, kicking up the snow and scrambling right up the face, then left along the ridge to the summit. The peak, though low and minor, has an unobstructed view of the Moraine Lake cirque, including the Inspiration and Fury Glaciers. Returning to the descent route, I quickly slid down to the rocks, passing a party of three just returning to their tent, then scrambled up to the Eldorado Creek side of things.

So far I had been enjoying the lack of traffic, seeing perhaps a dozen people on a Saturday on a popular peak. My joy and solitude ended abruptly here, with another two or three dozen tromping up in the afternoon heat, most wearing boots and carrying a single snow picket. (Perhaps the Mountaineers teach some form of crevasse rescue that uses it?) I descended the trail, boulders, and more trail, found the first part of the old log crossing, decided not to swim the washed-out part, then found a slightly worse way back to the new logjam. Mine was still the only bike at the trailhead, and I enjoyed a quick descent to the car, passing a few envious backpackers on the way.

Hidden Lakes and the Triad