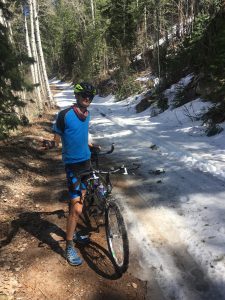 While I have been traveling and getting out more than I do in a normal winter in the Lower 48, I have unfortunately been writing less. Though I do not plan to abandon the blog, I expect this new sporadic schedule to continue.

The greater Gila is a largely undeveloped area of mixed piñon-juniper and ponderosa forest in southwestern New Mexico and eastern Arizona. While much of it lies within the Gila and Aldo Leopold Wildernesses of New Mexico, they are surrounded by a vast area of non-wilderness (i.e. bikeable) National Forest. With elevations ranging from around 5000 to over 10,000 feet, there is only a narrow springtime window in which the lowlands are cool enough and the highlands are relatively snow-free.

We had been carrying a tandem and bike trailer around on my car for weeks, at a significant cost in both hassle and gas, and it was finally time to use both. My friend Mike had laid out an ambitious 350-mile tour through the Gila, north from Silver City, then west to Alpine and down scenic Highway 191 in Arizona, which we hoped to complete in a bit over a week, including some time for hikes. The forest roads on the northeast part of the loop climb as high as 9,000 feet, though, so while the lowlands around Morenci would be too hot (and windy!) for pleasant touring, some sections remained impassable due to snow and mud. We therefore saw only small parts of what would have been an excellent loop. 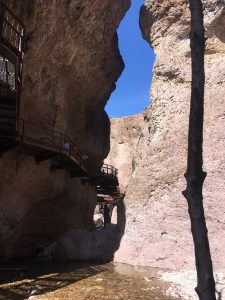 Our plan was to leave the car at the Glenwood Ranger Station, then bike the paved road up through the ghost town of Mogollon and continue on dirt forest roads to Beaverhead Ranger Station. The helpful woman at the Station, however, informed us that fire crews had recently been turned around on that road due to lingering snow. Since minor snowdrifts that block a truck are often avoidable on a bike, we remained slightly optimistic. However it was too late in the day to sensibly start, so we instead took a side trip to the nearby Catwalk. 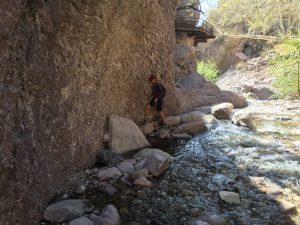 The Catwalk in its current form is a sturdy metal structure extending less than a mile up the box canyon of Whitewater Creek, popular among tourists visiting the Silver City area. It was longer and more impressive in its earlier forms, first as a slapdash wooden affair built by miners in the late 1800s, then wooden and metal replacements built by the CCC in the 1930s and Forest Service in the 1960s. We started on the modern structure, but were soon driven down to the river by the crowds of children and lumbering gawkers. It was actually much more fun below the catwalk, as I was able to hop from rock to rock, while Leonie splashed up the shallow stream. 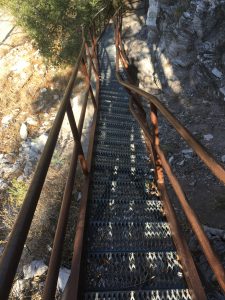 Somehow missing a trail closure sign, we continued past the crowds, finding remnants of several old routes up-canyon, all destroyed by rockslides and flash floods. There is no way to build a long-lasting trail up a box canyon with crumbling sides, but the trail has at various times followed the creek all the way to its source near Whitewater Baldy, the Gila highpoint. This area contains (or contained) a rich network of trails connecting the western lowlands at 5000 feet to a highline trail closer to 10,000, but fire, erosion, disuse, and lack of maintenance have left them in an uncertain state. As tempted as we were to backpack these trails, we retreated and decided instead to try riding up through Mogollon as far as we could along our original tour route. 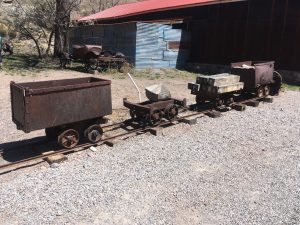 We spent a decent night in the Ranger Station parking lot; the ranger who approached us in the morning was more bemused than upset by our choice of campsite, and invited us to the annual dutch oven bakeoff that afternoon. We slowly assembled food and water for a single day, then headed north of town on the highway before turning right on the dead-end road to Mogollon. While there are a few summer homes there, and perhaps even a permanent resident or two, it is mostly a tourist destination in normal years, or a well-maintained cluster of abandoned buildings in COVID times. 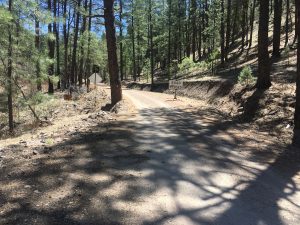 After climbing 2000 feet from Glenwood, the road descends 500 to Mogollon before turning to dirt. We stopped to take a few photos among the abandoned buildings and equipment, then continued uphill, climbing another 2500 feet to Silver Creek Divide at just over 9000 feet. The road maintained a consistent grade that was pleasant on the tandem alone, but would have been painful with a loaded trailer. It was mostly snow-free and dry to the divide, though its route along the creek meant we had no views and no visual cues of when the climb was done. We met a few cars, including a an ambitious Mini Cooper from Florida, but mostly had the area to ourselves.

At the Divide, we regrettably elected to miss the cookoff, instead continuing along the high traverse, with expansive views to the north. Unfortunately this north-facing slope held much more snow and tire-sucking mud, so we soon gave up, settling for some trail mix before returning through Mogollon and back to town. It seemed both too early up high, and too late down low, to complete our original tour. We were not done with the Gila, though: the mid-elevation roads between Silver City and the Gila Cliff Dwellings offered a suitable and seasonable consolation prize.

This entry was posted in Biking, New Mexico, Tourism. Bookmark the permalink.