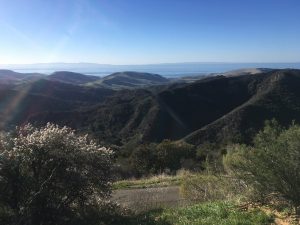 In addition to being sheltered from the wind, our campsite was above the cold marine layer, so waking up was pleasant despite our lack of a source of water. We had another forty or so miles to go, but they were downhill or flat and, more importantly, all paved. The final descent followed a stream and valley that collected cold air, but we were far enough south to prevent redwoods from growing, or my hands from freezing.

Declining to take a side trip to the “best hiker-biker beach camp in California” at Refugio, we turned onto Highway 101’s frontage road for the long ride east along the Santa Barbara coast. With smooth pavement and a tailwind most of the way, we made ridiculously good time, reversing several days’ progress west in a single short day. Low on food, we stopped at a convenience store for snacks, and were once again told that we were absolutely not allowed to have any water or use the restrooms. Perhaps this low-grade hostility will fade with the coronavirus, but I suspect it will become the new normal as businesses realize they can save a few pennies on their water bills and minutes of employee time. It is just another small efficiency eked out by the crushing magic of the free market. 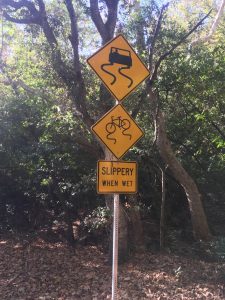 Did not slide out

This part of the route involved a mixture of segregated bike paths, striped lanes, urban streets, and a few miles of highway. Finding the best mix would have been difficult for a traveler, but green signs pointed us to the “Pacific Coast Bike Route”, which has been chosen as the least painful way to follow the coast through SoCal’s urban sprawl. While enjoying the easy ride through Santa Barbara, I fantasized that it might extend all the way from the San Francisco Bay to the Mexican border, but it sadly only goes from San Luis Obispo to Malibu. We will need to find another way to plow through greater Los Angeles and reach Baja. 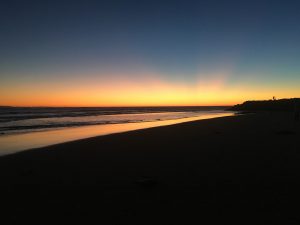 Even after a lengthy lunch stop with Steve, we made it back to Carpinteria by mid-afternoon, with plenty of time to shower and walk on the beach. We watched the sun set behind the Channel Islands and blinking drilling platforms — some of the few allowed on the California coast — then stumbled back along the beach in the dark to pick up some good but overpriced Thai food and retire to the car. The next morning we packed up slowly, then drove Highway 101 back north, the prevailing wind and tandem on the roof killing our mileage the whole way.

It had been a short tour, with only 160 miles and 16,300′ of climbing. However, we had crossed much rougher terrain than I expected would be possible with the tandem and trailer, and both the touring rig and our relationship emerged without suffering permanent damage. Parts of the route rivaled the roughest terrain I had navigated in South America, and we even negotiated several stretches of single track, which I had never considered. However, the rig’s sweet spot is paved side-roads or good graded dirt, which is where I hope to focus in the future.