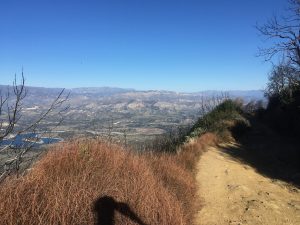 It was once again cold and windy overnight at Hidden Potrero, but we woke encouraged by the knowledge that it was all downhill between us and pavement, which we had not seen in four days. (A potrero is a long mesa on the side of a mountain, often used as a pasture. Like the campground’s supposed water source, its pasture was not obvious, making the name accurate.) The sun also rose early at the saddle, making it easier to get a reasonable start around 8:30. 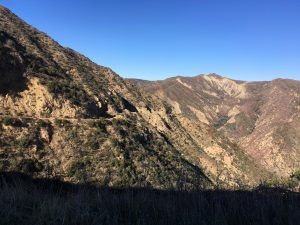 The rig was relatively light and maneuverable, with not much water and only one more dinner and breakfast. I had feared that the descent would be rutted and overgrown like previous day’s climb, making it little faster, but the road down to Upper Oso was in much better shape. It is steep, though, and we had to walk the bike down a couple of sections where I did not feel confident in the caliper brakes’ ability to stop it. The road cuts spectacularly down Oso Canyon, with steep chaparral and minor cliffs on both sides and the Santa Ynez mountains ahead. 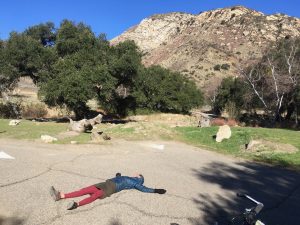 I kissed the pavement at Upper Oso, then we rolled into a campground that much larger and better-maintained than the ones we had passed over the last few days. There was a working spigot, a dumpster, and even flush toilets (!), though only the camp host and a possible day-hiker were around. The miles flew by on the smooth descent to the Santa Ynez, and even the rolling terrain out of Los Padres National Forest along the river went quickly.

Highway 154 is now the main route over the divide at San Marcos Pass, but Steve had suggested we take the old stagecoach road, which is paved and in good condition, but windier and more gently graded. A few minutes after turning up the climb, we were caught by a guy with full panniers. He introduced himself as Eric, and said he was headed down to “San Diego… and if I have the time, Florida.” He was clearly no novice, having first biked this way with his father decades ago. With a bit of digging we learned that, among other things, he had ridden the Baja Divide route, a rugged mountain bike trail down the spine of Baja California. With his restaurant job mostly scuttled by the pandemic, he now had more time than money — a situation perfect for bike touring. 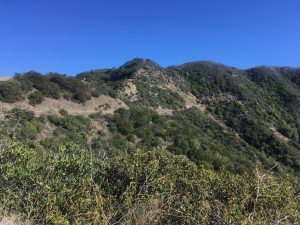 We parted at the pass, heading in opposite directions along Camino Cielo, a gratuitous road that snakes from Refugio Pass to Romero Saddle along the crest of the Santa Ynez Mountains, eventually connecting Refugio on the Pacific to the Santa Ynez River at Juncal. On foot or possibly motorbike, one can continue east along the crest, following the Ocean View Trail to another section of Camino Cielo that descends to Ojai. The sections east and west of San Marcos Pass are paved, and a moderately popular scenic route for cyclists and (unfortunately) cars and motorcycles as well.

Having climbed 1300 feet to the pass, we descended slightly along a cold stream where we should have refilled on water, then climbed another thousand feet to the end of pavement at the Winchester Gun Club. We noticed numerous sandstone blobs along the road, and later learned that the area behind Santa Barbara has quite a bit of climbing described by Mountain Project as “not a destination area, but good routes exist.” With hot springs, wilderness, closed-off dirt roads, peaks, and local-friendly crags, it wouldn’t be a bad place to live… if it were affordable. California is a wonderful place, ruined by the number of people aware of that fact.

At the noisily active gun club, we once again left pavement for another ten miles along the crest, to another paved section near Santa Ynez Peak at our tour’s highpoint just over 4000 feet. The pavement had made me complacent and uncharacteristically optimistic, so the initial steep descent, with scattered rocks, eroded channels, and another gate passed by partial disassembly, was a rude shock. With a mixture of careful riding and hike-a-bike, we eventually reached the lowpoint, from which we had another 1600 feet to climb, all on similarly-degraded dirt. 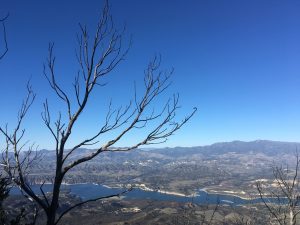 Between the wind, the slow terrain, and an increasingly-worrying shortage of food and water, this was a rough slog for an afternoon so late in the tour. We mostly had the road to ourselves, suffering together toward the towers that marked its end, appearing and disappearing with the undulating ridge. While I do not handle brush and miserable washouts well, I am comfortable with long miles and elevation because, with a predictable rate of progress, I can calculate how much longer they will last. I was therefore able to settle into the grind and enjoy the inverse views: to the left, the Pacific surrounding the Channel Islands; to the right, the rolling dry hills surrounding Lake Cachuma.

As we approached Broadcast Peak, we were surprised to hear “on your left” and be passed by a mountain biker, taking a video on his phone as he passed. I was a bit jealous of his ease, while he thought our unlikely setup was “sick.” The road winds just south of both Broadcast and Santa Ynez Peaks, both of which would have earned me Peakbagger Points via short roads to their summits, but time was short, and I was too beaten down to even consider tagging them. 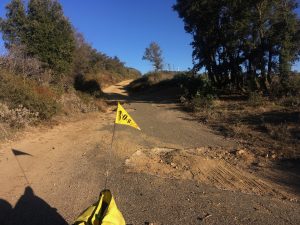 At the pavement it was Leonie’s turn to crouch and kiss the ground. Then we put on all our clothes to race the sun down the 4000-foot descent to the sea. Steve had recommended the Refugio biker-hiker campground on the beach, about an hour away, as the best one in the state, and we made our best effort at speed down Refugio Road. This could be scary at times, as the pavement was sometimes rough, the road narrow, and the joy-riding drivers and motorcyclists headed up to watch the sun set took the blind corners at speed. Even with our lightest load of the tour, carrying little food or water, I wore down the brake pads considerably, and was worried about my ability to control our speed. (I briefly looked into adding braze-ons and replacing the calipers with discs, but this does not seem like a clear win.)

My hands were aching and cold, and Leonie was practically falling asleep on the back, when we found a pullout about 1200 feet above the ocean with a sheltered and flat-ish spot to camp, and no angry signs. We were low on food and water, but both tired enough to prefer it to riding another half hour to the beach. I was happy to just suck it up and figure things out in the morning, but Leonie decided to flag down a car and ask for water, something I would hesitate to do in the States even in non-COVID times. This time we lucked out: the first car was driven by a young woman named Angelina who was carrying not just bottled water, but mandarin oranges and (for me) chicken salad. We watched the light fade over Santa Cruz Island as we ate our last dinner, then crawled into the tent for our first windless sleep of the tour.

Out of the rough stuff