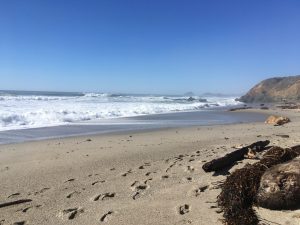 [Leonie will be writing some posts about our shared adventures, including this one. They will include her byline. — ed.]

In 1986, Martin Luther King Jr became the first modern private citizen to be honored with a federal holiday. Though it was created in 1986, several southern states promptly combined it with a holiday commemorating Robert E. Lee and Arizona even rescinded it! In 2000 all 50 states finally observed the third Monday in January as MLK Day. 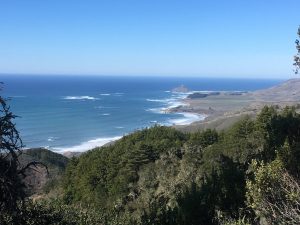 For us, MLK Day just meant a lot of traffic down the scenic Big Sur Highway. We decided to wait the day out with a hike in the balmy 70 degree January weather. A wrong turn out of Andrew Molera State Park led us to an enchanted meadow ringed with oaks where we were delighted to find picnic tables, a functioning spigot, and clean porta potties. After rinsing some clothes and setting them to dry on our enormous wheeled laundry rack, we set off up the trail. 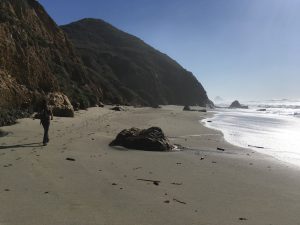 We crossed the burbling Big Sur River and climbed through oaks draped with lacy lichen to a windswept ridge without seeing a single person. We rambled along a ridge cloaked in dense, brushy, and highly flammable chaparral. About a thousand feet above sea level we crossed into a stand of majestic redwoods, clinging to the moisture of a creek as they climbed the otherwise dry hills.

A panorama of wild surf stretched before us when we stopped for snacks before the descent. The heaving glittering ocean beckoned so we paused only briefly before starting down the steep eroded trail. Yucca, Yerba Santa, and Indian paintbrush grew on the trail margins; biological diversity is astounding where Southern and Northern California meet. Beyond the trail lay a dense snarl of prickly impenetrable brush: cross-country travel leads to blood and frustration in the Santa Lucia Mountains.

We crossed a mosaic of driftwood to arrive at a remote beach, where we found crashing surf and a gauntlet of swirling white water. We settled for standing ankle deep on the edge of the sea, watching waves crash, seagulls whirl, and sand erode from under our feet. 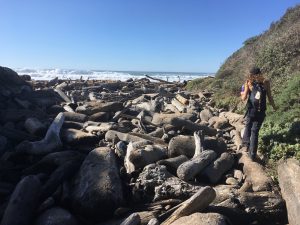 The hike back took us along a coastal bluff, where sweeping vistas alternated with tunnels of brush. As we neared the parking lot we started crossing paths with more people, so we ducked down a side trail to avoid Covid exposure.

During the hike we talked about returning to the enchanted meadow one day to camp; when we returned to our rig at 3:30 PM to find the place abandoned we thought: why not tonight? The third day of a tour isn’t the usual time to take a mellow hike, but we were delighted to laze in the sun, read books, and drink tea while deer browsed on the edge of the clearing. Though our campsite wasn’t technically legal, the ranger who drove by twice the next morning gave us no trouble. Either we cast a cloak of invisibility or they just didn’t care. We packed, refilled our water bottles, and continued south. 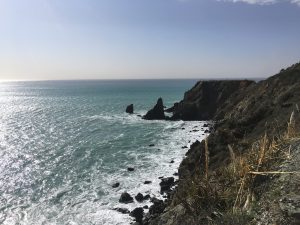 We rolled down the Big Sur coast, pushed by a gentle tailwind, watching waves crash into jagged cliffs, spewing foam into the sparkling blue sky. We crossed improbable bridges, suspended hundreds of feet over trickling creeks. Traffic was blissfully infrequent and we often took the full lane for the sheer joy of banking into turns on the winding ribbon of asphalt clinging to the edge of the continent, between mountains and the wide sea. 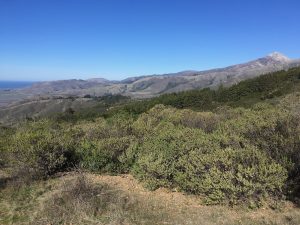 The 140-mile long Santa Luca Range extends from Carmel in the north to the broad marine terraces of San Luis Obispo County in the south. With warm dry summers and mild Mediterranean winters, snow is rare so alpinists tend to overlook these mountains. But they form the steepest coastal slope in the contiguous US, rising from the sea in sheer cliffs cut by narrow creeks and rivers, never more than 11 miles from the ocean. Cone Peak, at 5,158 feet, is just three miles from the heaving Pacific; it’s the highest peak in proximity to the ocean in the Lower 48.

We passed the trailheads for Pico Blanco and Cone Peak without pausing, our climbing lust tempered by the atmospheric river of moisture predicted to hose California’s central coast in a week, and the hundreds of miles we’d need to cover to get home dry. Between a paper map and downloaded Caltopo we couldn’t quite figure out how to access some of the trailheads anyway. “No Trespassing” signs bristled at infrequent driveways and barbed wire lined long stretches of highway. Over 500,000 acres of Big Sur are protected by various state and federal agencies; they receive millions of visitors a year. The 1500 people lucky enough to own land along what painter Francis McComas called the “greatest meeting of land and water in the world” guard their privacy. 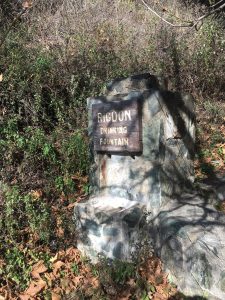 Poet Henry Miller, who haunted the Big Sur coast during the 40s and 50s, wrote: “I have the very definite impression that the people of this vicinity are striving to live up to the grandeur and nobility… of the setting. They behave as if it were a privilege to live here, as if it were by an act of grace they found themselves here. The place itself… engenders a humility and reverence not frequently met with in Americans.” We were stunned into reverent silence and occasional bursts of song by the unfolding beauty all around us.

To our left rose steep chaparral cloaked hills and valleys, to the right were cliffs hundreds of feet tall dropping towards crashing waves and the vast placid expanse of the Pacific. Between these geographical barriers, the indigenous people of the Big Sur Coast, the Esselen, developed distinct cultural and linguistic patterns. One of the least numerous bands of California Natives, in close proximity to two missions, they retreated to the rugged interior when confronted by the advance of Spanish colonization, only filtering down to ranches and towns in the 1840s.

Almost 200 years later, they are finally stewards of their homeland again. In 2020, the Esselen tribe closed escrow on 1200 acres along the Little Sur River, where they hope to tend the majestic redwoods and enormous condors that call this land home. “It is with great honor that our tribe has been called by our Ancestors to become stewards of these sacred indigenous lands once again,” Tribal Commissioner Tom Little Bear Nason told CNN.

In the afternoon, winds shifted and we found ourselves battling a fierce south west wind. The famed Santa Ana winds impeded cheerful progress and we labored up each climb, desperately scanning the roadside for any feasible camping. Barbed wire and dense chaparral returned our gaze. 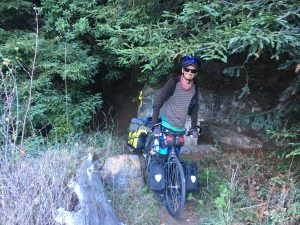 No, officer, not camping…

Cresting a hill, we spotted a band of lush greenery clinging to a narrow creekbed. Redwood Gulch holds some of the southernmost redwoods in the world. Sequoia sempiverens, or coast redwoods, grow from southwestern Oregon to the grove where we camped, never more than 50 miles from the ocean, from sea level to almost 3000 ft. They are some of the oldest and the tallest trees on the planet, and a worthy arboreal objective for the winter alpinist; we had earlier climbed an old growth tree in Santa Cruz that Chris Sharma used to play around on. Redwoods once covered over 2 million acres; after the ravages of clearcutting fueled by the internal combustion engine and tax breaks, fewer than 120,000 acres of redwood forest remain.

We wrestled the bike a short ways off the road and carried the rest of our gear across a dry creek bed to a flat tent platform sheltered by towering trees where the Santa Ana winds became a distant memory. A spring fed creek burbled up canyon. We set up camp and performed our evening chores in hushed awe before settling into dreamless sleep beneath the ancient giants.