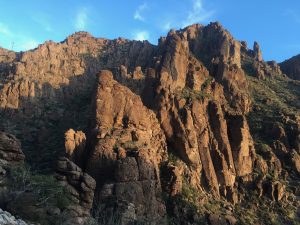 As winter advanced, we continued to retreat south and down. After finding that sport climbing in the Superstitions is limited, bad, and hard to reach, we continued to Queen Creek, an area between Superior and Globe along Highway 60 suggested by Leonie’s friend Liz. I had never heard of the place, but it turned out to have multiple areas with short approaches and plentiful sport routes on welded tuff and some granite. There is also — rarity of rarities! — free camping with pit toilets on nearby Forest Service land at Oak Flats. Most of the climbing is on Queen Mine land, and requires a liability waiver from the mine company, but this is a free and easy formality that can be taken care of online at the Queen Creek Coalition site. We ended up climbing there for three days, and could have stayed longer had the weather not turned. 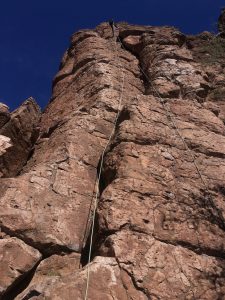 We spent our first day in Atlantis, a five-minute walk down a steep slope from the highway. Most of the climbs in this area are on either side of a slot canyon below a concrete check dam, and are too hard for me to lead. However there are enough moderate routes to stay busy for a day, and I even managed to lead a 5.10b by mistake. We arrived to find a family with a dog climbing on one of the easier crags below the main area, locals who helpfully oriented us in the confusion of crags and bolts. We started with Ali Cat, a long 5.7 going up a steep face with positive holds. It was a good place to become familiar with the area’s rock, with ample bolts and low-consequence falls. It was windy, and the guidebook recommended Atlantis for such days, but that suggestion seemed way off base, as the wind was fierce higher up on west-facing Ali Cat, and the main area was a wind tunnel.

After cleaning the first route, we dithered for a bit, then headed into Atlantis proper for First Born, a varied 5.8 involving face, crack, and chimney climbing. One of the other climbers came over to watch, remarking that it was her favorite moderate and that she had never seen anyone do the final chimney facing the way I was. Little did she know that I only faced that way because I had no idea where the anchors were, but fortunately there were plenty of holds to turn around and top out. 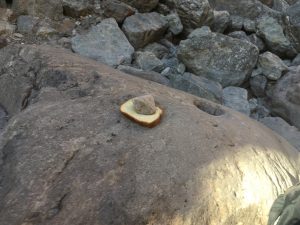 Next we moved slightly downstream to attempt one of a couple of 5.9s. The guidebook and Mountain Project were both somewhat confusing, though, as the former is outdated, the latter lacks diagrams, and there has been continuous modern route development. I ended up by mistake climbing KGB, a 5.10b on which I had no business and which I had wanted to avoid. Though it felt more serious than the 5.9 I was expecting, I amazingly managed to climb it without falls, and was inordinately pleased with myself for pulling it off. We finished with some short moderates on a small west-facing section downstream, then hiked back to the car and took a spot at the popular but spacious Oak Flat campground.

The next day we hiked over to Upper Devil Canyon to check out the climbing there. We spent most of the day on a few climbs on Lost Wall, the only memorable one being Projectile, a 5.7 following an open book. We finished with a fun route that might have been Spanish Omelette (5.8) on Universe Wall, which pulled several well-protected bulges. It was fun climbing, and grippier rock than the stuff at Atlantis, but after being spoiled by five-minute approaches, it was somewhat of a disappointment. 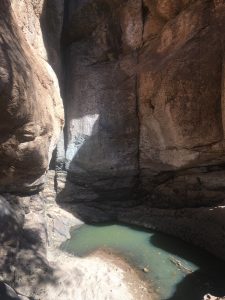 For our final day before the rain, we headed back to the roadside area to explore the Pond, an area around what is, in the Spring, a pleasant waterfall and swimming hole. Now it is a slimy mosquito breeding facility, but the climbing remains high-quality, and the approach under an overpass and up some rebar rungs is quick and fun. We started with three routes near the pool, Deadpool (5.8) and two others to its left, both supposedly rated 5.7. I led the middle one first, which felt unreasonably hard for its grade; later I learned that some holds had broken, making it closer to the 5.9 it felt. Leonie was not feeling particularly well or motivated, so she mostly hung out and did yoga, sometimes doing both in the middle of a climb. 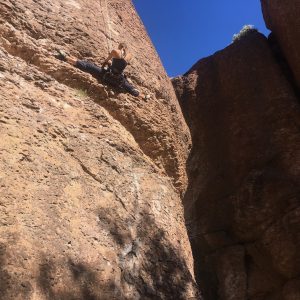 A few other parties joined us as we climbed, starting from the left and working their way right as we did the opposite. There was plenty of room to keep socially distant, and even mostly out of earshot, so it never felt crowded. I eventually made it up Weak Sister (5.10a) after falling a few times on the well-protected crux bulge; my limited forearm strength was showing on this steep, crimpy climbing. Sufficiently humbled, we did a mediocre neighboring 5.8, then found a 5.6 far to the left. I led it, then Leonie toproped it a couple of times before leading it herself. Despite having climbed for many years, it was her first time on sport lead, and she handled it calmly.

Too late in the day, I decided to try Pocket Puzzle, a vertical west-facing 5.10a. Such a pumpy route would have been a stretch for me even when fresh, and it proved far too much for me at the end of the day. I made it a bit past the first bolt before admitting that I would never be able to top out, then managed to clean it and downclimb before scampering up neighboring Adventure Quest, a mediocre moderate involving brush and yucca, to finish the day. We both left feeling that we had left a lot of unfinished business at Queen Creek, but with two days of cold and rain in the forecast, it was time to once again move on. 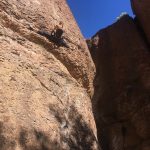