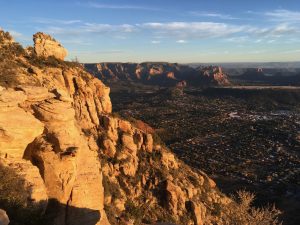 Climbing with Renee was one of the fixed points in my evolving winter plan, so I rallied down from southeast Utah to the kitschy little town of Sedona, south of Flagstaff. Despite countless trips through Flagstaff, I had never taken the thirty-mile side-trip south off the Kaibab Plateau, and while I was impressed by the abrupt drop from ponderosa forest to sandstone desert, the “no camping next N miles” sign hinted that I was entering a place incompatible with my dirtbag essence. According to Wikipedia,

In the mid-1950s, the first telephone directory listed 155 names. Some parts of the Sedona area were not electrified until the 1960s. Sedona began to develop as a tourist destination, vacation-home and retirement center in the 1950s. Most of the development seen today was constructed in the 1980s and 1990s. As of 2007, there are no large tracts of undeveloped land remaining.

In other words, the place has almost no history, what little history it does have is bad, and it has been overpopulated for the last decade. Be that as it may, I drove through the tourist schlock emporia among the pink jeeps, and found a place to park along the road below the overflowing trailhead for Capitol Butte. 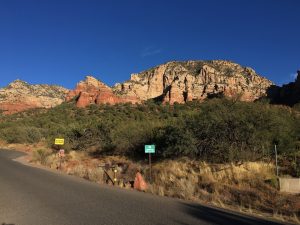 Whatever its flaws, Sedona is surrounded by interesting sandstone buttes, and Capitol, being one of the most prominent, seemed likely to have a good sunset view. It is also reachable by a short, steep trail, so I could get a quick workout after my long drive and make it back to the car without headlamp time. Being used to the cold Utah desert, I was surprised at how warm Sedona was, given that it is at the same elevation as Grand Gulch and Mexican Hat. Even standing still in the shade, I was comfortable in shorts and a t-shirt. I found the correct trail and the unsigned but well-used turnoff to Capitol, and had little trouble following the route on the way up. There are several braided paths, and while I may not have chosen the best, I did not lose much time. The route had a few runnable sections, but was mostly either too steep, or involved brush and rock steps, with several third class sections. If for some reason I ended up living in Sedona, it would make a fun workout peak. I reached the summit in time to enjoy the evening light on the sandstone north and east of town, then made it back to the car around dusk. The correct trail was harder to follow on the descent, and I wandered off-route several times before using my Strava track to correct my error. 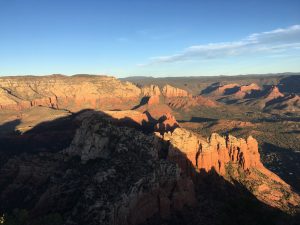 Once back at the car, I panned around the map for awhile looking for likely sleeping spots, and eventually settled on Boynton Pass Road. I have been doing this for awhile, so I was not surprised to have chosen correctly. However, I was surprised at both how far out I had to drive, and how crowded it was, hosting a mixture of the ubiquitous Sprinters with California plates, rental camper-vans, RVs, and trailers. I was tired and it was dark, so I settled into the first spot with a faint cell signal and a bit of privacy, ate my usual dinner glop, and turned in.

I woke well before dawn, then met Renee at a more civilized hour to climb a multi-pitch sport route I had found on Mountain Project, Motorboating. Given the distances and parking difficulties, it seemed easiest to approach by bike, so we rode the “moderate” trail to the base. Renee, being a competent mountain biker on a capable bike, probably enjoyed the rocky trail more than I did, but it was still an interesting challenge to negotiate as much as I could on my gravel bike with a heavy pack. We locked our bikes together off the trail, then scrambled toward a likely-looking starting point, getting ready to climb, and walking our gear along a ledge when we realized we were at the wrong place. 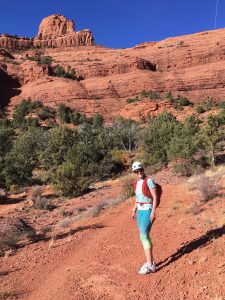 The route was somewhat disappointing in a couple of ways. Have the pitches were easy enough to barely require a rope, and it was necessary to walk the rope between belays. Worse, the sport route did not top out on the formation, so I did not get points for a summit. I was glad to be climbing with Renee, who both knows me and is patient, because I was a bumbling and incompetent partner after two or more years without climbing on a rope. On top of that, I managed to drop my long-suffering phone while leading the last pitch. Fortunately the case absorbed the first blow, and it landed through a bush onto sloping dirt. It has been a tough year for the poor little thing, which needs to last until Apple’s new “mini” (i.e. “normal-sized”) phones are available for cheap. 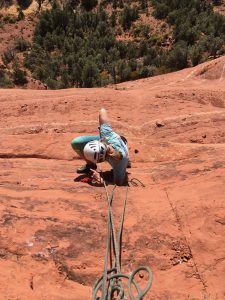 Renee was on child care duty for the afternoon, but we had just enough time to toprope the first two pitches of the route, which we had skipped with our mistaken approach. Lowering in from the top, I failed to bring any gear to redirect the rope, and was forced to climb the 5.10a variation. I flailed and fell and hung on the thin feet and crimps, but struggled through rather than giving up and untying at the bottom. Renee did a much better job, climbing it patiently and cleanly. We packed up, then rode back to town, finding the trail much more rideable in the slightly downhill direction. I killed some time internetting, then drove back out toward Boynton Pass to camp. It was even more crowded than the last time, so after a fruitless foray farther, I settled into my previous spot with a few more neighbors. It was almost like “camping” in an RV park, and soured me further on Sedona. 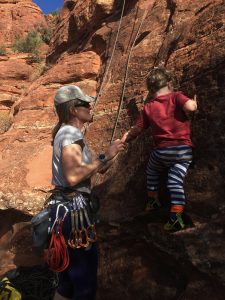 Renee was on Tyler duty on our final day, so we found a crag with some moderates and a very short approach, curious whether he would have the agility and motivation to play on a 5.7. I thought he might do well, since climbing the slabby routes we had found the previous day would be a bit like crawling. Unfortunately this area was steeper, so the 5.7s were relatively steep with big steps and handholds, too far apart to be doable for a three-year-old. The first route we climbed was dirty, with lots of rubble perched on ledges and ready to bombard the belayer while lowering. The second was at least clean and fun, and a little more kid-friendly, but by that time he had exhausted his motivation, and preferred to snack and play with dirt. He helpfully brushed off some of the lower holds, which Renee and I hoped would lead to actual climbing, but it was not to be. I doubt I would enjoy being a parent, but I do enjoy observing my friends’ kids’ development. My brother and I were both capable of a variety of outdoor activities by the age of five, but two years makes an enormous difference around that age. Even a four-year-old we saw on the way back to the car was quite a bit more capable, though apparently not enough so be motivated to climb.

Fortunately Renee had some more time later in the day to climb, so we were able to get on some more challenging routes. We both cleanly led a 5.8 and 5.9, with the latter feeling close to my limit these days. This was a pleasant surprise, since even when I was eight years younger and climbing more regularly, I never led more than about 5.9-5.10a. I suppose years of scrambling experience and my current leanness make up for my lack of practice and approaching decrepitude. In any case, it was a pleasant way to end the day. We toproped a couple of made-up and chossier routes nearby while talking to another pair of climbers, then went our separate ways. I was anxious to escape Sedona before being sucked into a vortex of yuppitude.

Other climbers on choss