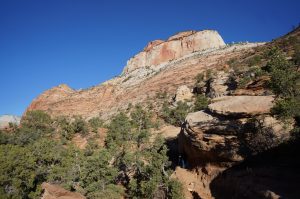 East Temple is a large, sheer-sided butte just north of Zion’s east entrance road, on the edge of the main valley. Though it looks inaccessible to scramblers like Yours Truly, bighorn sheep have been climbing it for millenia, via an improbable route that corkscrews around from the southeast corner near the popular valley overlook. Though sheep-friendly, the route is rated 5.7, and the crux is a slab traverse, making it the most difficult and intimidating route I meant to climb on this visit. It was still cold, but I had given it a few days to dry, and had plans elsewhere, so it was now or never.

I once again drove into the park early, both to skip the entry fee and to get one of the few spots near the popular east tunnel overlook. Unfortunately it is a popular place to photograph the sunrise, so it was already a zoo when I arrived around 7:00. I rudely turned around in the road, drove a quarter mile back east to park, then sat in my car for awhile waiting for it to become less frigid. The route seemed short enough that I would not have to worry about running out of daylight, and I was getting tired of cold hands. 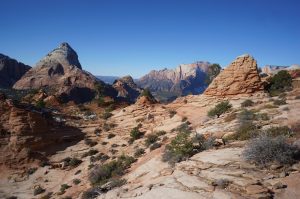 I slogged through tourist hordes on the narrow trail to the overlook, with its carved steps and nice, safe railings, thinking that it might actually be possible to transmit a coronavirus outdoors in such a throng. I stopped at the overlook to look at East Temple for a bit, then left the official trail to climb toward its base, giving the trio of rangers who had arrived a wide berth. Since I wasn’t carrying ropes and such, I looked like what I am — more a homeless guy than a Real Climber — and worried they would yell at me for wandering off-trail. The first part of the route is a rising traverse across the peak’s lower-angle apron toward the north end of its upper white cliffs. I had a route description, but it is not really helpful. There are a couple gullies that can be brushy and annoying, but the goal is to reach a point around 6000 feet on East Temple’s southwest side via a game of “slab chicken,” generally heading up and left while staying on the lower-angle slabs via micro-route-finding. None of it is harder than class 3, but there is no single best path.

The route description finally became useful at the southwest ridge, where the “notch with a tree” proved much more distinctive than I had expected. The view from the notch was disconcerting, though: I saw no feasible line up out of the next gully, and nothing that looked like a friendly side-gully leading on around lower down. There were no cairns or signs of human passage, it was shaded and cold on the west slope, and the thought of turning back entered my mind. Only partly shaking off that weakness, I traversed some snowy ledges into the gully and began descending. 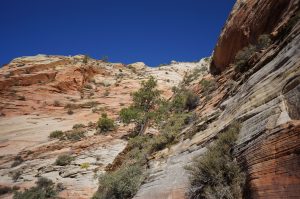 A few hundred feet down, the route’s likely continuation became clear: a brushy slot with moderate-angle slabs to its left, leading up and around toward the peak’s west shoulder. A small cairn confirmed my hypothesis, and a return to the sun lightened my mood. I scrambled up the slot a bit, then took to the slabs, where I found some more serious climbing and tricky route-finding. The crux was near the top, where one follows a series of outward-sloping white ledges to get around a headwall. I grabbed at a bush, focused on smooth movement, and tried not to think about how far I would bounce if I fell, or how this would feel on the way down. At the top, I passed an old sling around a tree, then traversed left to easier terrain on the ridge. 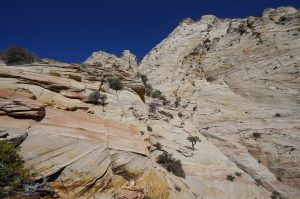 After climbing easier terrain, the described route became obvious: a brush-choked chimney leading to a slung pine tree. The moves became harder as I ascended, and the climbing was unpleasant throughout, stemming and stepping on dirty ledges, and alternately grabbing, pushing through, and stepping on various brush. At the top, I encountered a large step guarded by a downward-growing shrub. I might have been able to climb it by yarding on the bush, but it did not feel solidly attached, and I backed off. The oaks below would have caught my fall, but I did not want to risk it.

A comment on Mountain Project suggested climbing one of the shallow gullies to the left, so I tried each in turn. They looked feasible from below, but I could not find a way up either that felt comfortable. Slab climbing, especially on sandstone, is a mental game, and my confidence and judgment were fading. I tried the first slot for some reason, reaching the same high point and trundling the crux plant, which had only been held in by a thin root. I found the now-shrubless step too difficult, and once again thought of giving up. 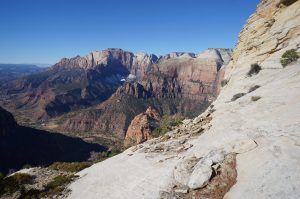 After a snack — sugar makes everything seem better — I decided to check around the corner to the left. I had a good feeling about the terrain there, and I knew that sheep climbed this. Since they cannot stem, there had to be an easier way. My persistence was rewarded, as I found slabs and ledges leading around the difficulty which were mostly class 3-4. Once again, my persistence and alpine tricksiness let me cheat my way around difficulties that others seem to take head-on. But these qualities only took me so far, and once I reached the upper slung tree, I was faced with the inevitable crux: a long, rising slab traverse around to the north side. 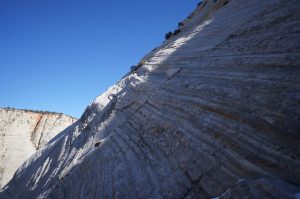 This traverse used to be an unprotectable friction-fest, following flatter stripes and knobby dikes up and left to the pre-summit plateau, but someone (NPS? climbers?) has installed a lot of hardware. Now there are a dozen giant eye-bolts and three ladder rungs for belays, placed along either the best path or the one that someone with a drill happened to take. This was dicey climbing at the best of times, especially in trail runners, but my head was back in the right place. However, as the route wrapped around the northwest side of the Temple, the rock became wetter, and patches of snow lingered on some ledges. This was not going to be easy. 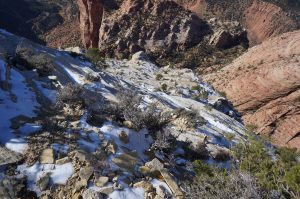 I started along one stripe, retreated, then tried a slightly different attack, eventually reaching the first bolt. I debated for a minute, then put two fingers through and grabbed it. This was “cheating,” but I justified it to myself on account of the wet rock; if the route were dry, I would have the skill and confidence to climb it in its original condition. I worked my way up and left from there, sometimes staying near the bolted line, sometimes wandering left on ledges, grabbing or stepping on hardware when it helped. As the route wrapped around, the snow, ice, and wet rock became more problematic, and I frequently knocked snow and grit off my soles at the transitions back to dry rock. In such conditions, the tough little desert bushes were more reliable than the rock in which they grew. The final section, climbing a trough to the plateau, would have been an easy romp when dry, but it was sheltered and shaded, making it a snowy, icy sketch-fest. 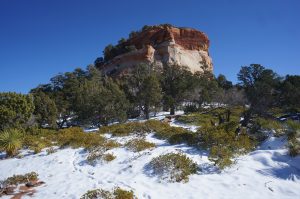 I emerged on the sandy, brushy fore-summit with a shudder of relief, then hiked as quickly as I could around the peak’s north side, mindful of the slow, careful descent to come. The snow was never more than six inches deep, but it hid some treacherous cactus. I made it around to the east side with only one minor spiny incident, wrapping almost to the southeast corner before finding the obvious route to the summit plateau. From there, I trudged back to the highpoint on its west end. I took a few quick photos and had a snack, but could not bring myself to linger while the downclimb remained. 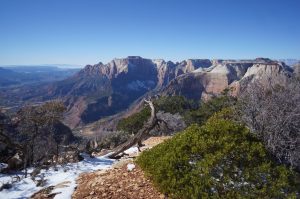 Descending the slab crux was as sketchy as I had anticipated, but patience and caution prevailed. From there, the rest was mostly comfortable, though the steps below the first slung tree gave me pause. I descended the slot, reclimbed the main gully, and passed through the notch with the tree. I was either better at, or numb to, sandstone slabs at this point, so the traverse back to the overlook felt much more casual. I pulled up my buff and flowed slowly with the tourist crowds, occasionally passing when the opportunity arose and my patience gave out.

I still had a few hours of daylight, and did not expect to return to Zion for some time, so I stopped on my way out of the park to tag Checkerboard Mesa. Though it is probably more photographed than the East Temple, it is a much easier climb. Unlike neighboring Crazy Quilt, where one climbs straight up the checkered face, the route up Checkerboard thrashes up a gully to its left, then slogs along endless summit plateau before thrashing through oak and pines to the highpoint. I took a few photos, then hurried back to the car before sunset, driving back east past Kanab to find a place to camp with service. It was an anticlimactic end to a satisfying and successful Zion visit. I have badly underrated Zion’s scrambling potential, and want to return to explore it further.