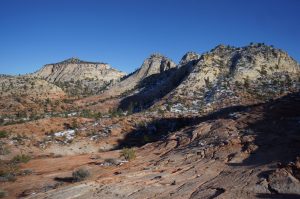 I had one more big thing to do before leaving Zion, but the rock still needed more time to dry, so I decided to tag a few more easy peaks south of the entrance road. Nippletop had aroused my interest from both the Ares (Aires? Ariel?) Buttes and Progeny, so when I learned that it had a class 3 route, it seemed an obvious choice. Separation and Lonely are two minor satellite peaks recommended as side-trips in Joe’s Guide, and the others happened to be nearby, and to turn the day into a nice loop. 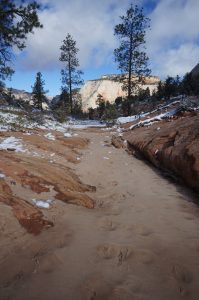 I parked at a pullout near the drainage east of Nippletop, crossed the main wash, then headed south, grateful that the slickrock here was free of snow. The sun was out, but it was a cold morning, and my feet ached despite another late start. From a distance, Nippletop looks a bit like a cupcake, with vertical sandstone sides, a sloping frosting of trees, and a decorative rock blob on top. The key to reaching the frosting is a ridge extending north, with a lower-angle bowl to its east. The bowl is partly shaded by the main peak, so much of the rock was still wet or snow-covered, but it was mostly low-angle, and broken up by solid trees and bushes higher up. As I hiked, I found myself listening to an interview with a guy who had fallen in a crevasse on the Teton Glacier this past summer while descending the Koven route. Everything about his account, from his near-death experience to his description of the climbing process, was strange to me, but I easily pictured one of my favorite routes, which I have done a half-dozen times without incident. 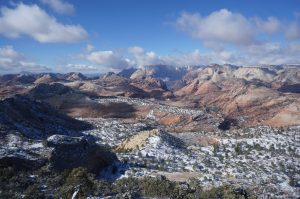 After climbing the bowl, the route traverses the ridge to the main peak, then climbs a short step to the summit plateau. This is north-facing, and was all covered in snow; I briefly followed some sheep tracks, then put my down jacket back on once I passed into the shade. There was a bit of brushy third class here, but fortunately no treacherous slabs, so I quickly reached the plateau and returned to the warming sun. After a hike and another couple third class moves, I was standing on the tip of the nipple. Familiar peaks surrounded me to the east, north, and west, from Crazy Quilt around to Bridge and G2. East Temple dominated the view to the northwest, its south face drying out nicely. 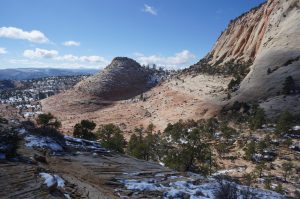 Returning down the bowl, I headed east a bit to Separation Peak, finding the final slab moves onto its summit surprisingly delicate when covered in ice and snow. It seemed arbitrary to me that, of the various bumps surrounding Nippletop, this and Lonely Peak have received unofficial names, while the one between it and the Triplets has not, but that was reason enough for me to choose which to climb or not. Lonely is another short hike from Separation, an easy peak without a steep summit cap. 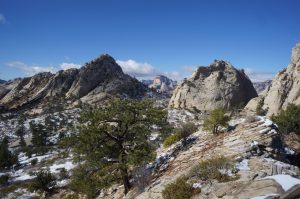 I could have returned the way I had come from here, but I noticed that the Triplets and Lost were not far west and looked doable, and I could return via a loop through the next drainage. This seemed more interesting to me, so I headed west for the first and highest Triplet. All three are made of soft white rock with layers rising toward the northeast, so I found myself climbing steep, snowy, but positive terrain, then descending more gradual but still somewhat sketchy outward-sloping slabs. They are probably class 3 by their easiest routes, but felt a bit harder in the snow. I stopped for awhile on the first, where I had cell reception, to make post-Zion plans, then continued over the other two.

I dropped north off the final Triplet, then circled around west through the saddle to reach the base of Lost’s southeast side. The initial slabs climbing out of the scrubby plateau were a bit steep, but it soon mellowed out to an easy walk, leading to a summit with a close-up view of the familiar Roof, Hepworth, and Gifford to the west. The north ridge looked similar to the south slope on the topo, but was slightly trickier thanks to snow and a couple of steep steps — conditions were not ideal. Once on flatter ground, I made my way northeast into the wash, where I found some footprints and eventually a use trail leading back toward the road. It would have been fastest to walk the shoulder, but I had time to spare, and walking along a narrow road next to tourists gawking from their rented RVs and trying to parallel park sounded unpleasant. I chose instead to follow the wash south of the road, which is easy and surprisingly scenic, with bits of slot canyon and little brush. Back at the car, I thought briefly of climbing the snowy, north-facing gully to Checkerboard Mesa, then decided it could wait for a warmer day.

Nippletop and Crazy Quilt from Triplets