Mountain of the Sun, Progeny 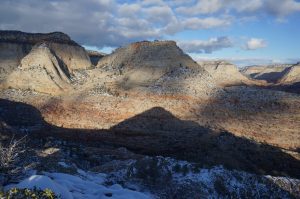 With the rock wet and/or covered with snow, difficult scrambling was out of the question. Joe from the Climbers’ Ranch had sent me a link to Joe’s (no relation) Guide to Zion, a mix of hikes, scrambles, and technical canyons. I picked out a couple at random that shared a trailhead and looked no harder than class 3, then headed into the park, looking for striking views of snow-covered sandstone. However it remained stubbornly cloudy and unpleasantly cold, so I sat in the car and enjoyed my coffee, in no hurry to start. 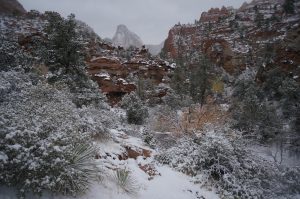 I finally got out at Upper Pine Creek, the start of the route to Mountain of the Sun, which would have a good view of the main valley peaks. The sand in the wash was pleasantly firm from its cold soaking, and even a bit too soaked in places, as I had to thrash through the snowy brush to get around some standing water. I could see enough of the surrounding terrain to navigate, but distant features were mostly obscured by clouds, and it continued to snow intermittently. My feet were soaked by the snow on the ground, my hands by that on the rocks and branches, and both were on the edge of unpleasant cold. 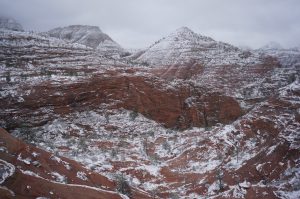 The climb over the saddle from Pine Creek over to the next creek west would have been little more than a hike when dry, but proved somewhat more thought-provoking in the snow. Slabs in general are treacherous when wet, and Zion’s sandstone ones are worse in several ways. First, the wet stone sheds sand, which lubricates its surface. Second, the black lichen on some slabs turns incredibly slick. Third, edges and protrusions become brittle, making them unreliable. But this is why I had chosen a hiking peak; the snow made it challenging rather than impassable. 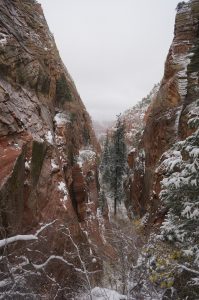 Coming down the other saddle, I heard a sound and turned to see a herd of bighorns. They were timid as usual for the desert variety, with the herd taking off down the wash between the Twin Brothers and East Temple, one standing watch before following the rest. I turned the other way, heading north to a narrow saddle next to the Twin Brothers before descending toward Mountain of the Sun. This unusual feature of drainages flowing north and south from a narrow connecting saddle seems common in Zion; I had noticed a similar saddle in Hepworth Wash, and it seems like many of the valleys south of the east entrance road have such saddles. My guess is that they occur because erosion has taken place more by wind than by flowing water, where one direction or the other would receive more flow and capture the other. 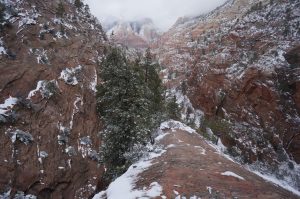 Thanks to my excellent route description, I had no trouble finding the ramp leading back to the saddle between Twin Brothers and Mountain of the Sun. True to the description, it was exposed o both sides, sloping down into the main drainage on the east, and a minor one on the west. Here once again I would have had an easy walk in dry conditions, and thought nothing of the exposure. Wet and covered in snow, it required some caution, carefully avoiding the lichen when possible, and kicking my soles clean when transitioning from snow to bare rock. 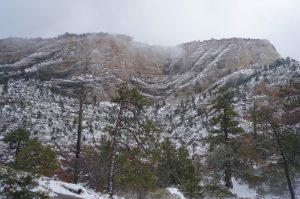 The direct traverse over to the saddle was too slick, forcing me to detour well south, then thrash through snowy manzanita, which offered better footing. By this point my hands and feet were unpleasantly cold, and the snow seemed about to turn to drizzle. I did what I normally do when cold and unhappy, eating most of my food, standing around with my hand in my pockets, and contemplating turning around. Fortunately I continued, and found the rest of the route no harder than what I had done so far. The “class 4” crux was fortunately a steep, brushy gully instead of bare slabs, meaning it was little harder to climb in snow. 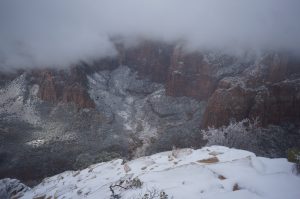 From the summit, I had intermittent views down to the Zion Lodge to one side, and the main visitor center and mouth of the valley to the other. Occasionally I could see the Twin Brothers to the south, or the lower portions of the valley’s west side, but they remained mostly hidden. Some careful slabbing got me back to the wash, after which it was just a hike to the car. No more than a quarter mile from the road, I once again met a herd of bighorns, two adults leading about eight juveniles of various ages. Perhaps because they were uphill of me, they were less timid than the others, and we stood around observing each other for awhile. I had planned to combine Mountain of the Sun with Progeny, but reading the description more carefully, I realized that they shared a trailhead rather than an approach. I returned to the car, had some hot chocolate, then set out anew with just my camera in my pocket. 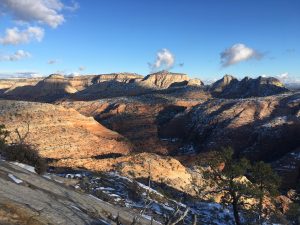 Progeny turned out to be an easy, rewarding, and stimulating afternoon hike. I quickly left the tourists behind, and had no trouble finding the small arch. I mostly ignored the route description, simply taking what looked like the obvious line toward the summit. I was reassured of being on-route by the sight of the “two breasts,” sitting perkily to my left, though any of a number of lines would have worked as well. From the summit, the late November afternoon light gave the East Rim Formations a warm glow, from the Ares (Aires? Ariel?) Buttes, to Crazy Quilt, to… Nippletop, continuing the afternoon’s anatomical theme. It was still cold, but mostly clear and pleasant in the sun with a down parka. I absorbed the scene for awhile, then scampered back to the car to find a place to spend the long, cold night.

Progeny from near trailhead