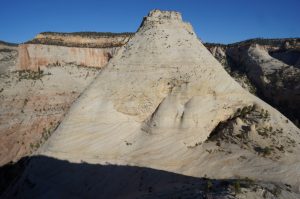 [Apologies for the focus problems. They are now fixed.]

With more comfort on Zion sandstone and bad weather approaching, it was time I stepped up my game to try some more legitimate scrambles. The four I chose are rated 5.6, beneath-real-climbers’-notice, 5.5, and 5.5; I would call them sustained 5.5, 3, 5.0, and one move of 5.5. I climbed up and down all of them in trail runners, and found only the first (Led by Sheep on Ares Butte) and one move on the last (the awkward corner on Lady) to demand concentration. 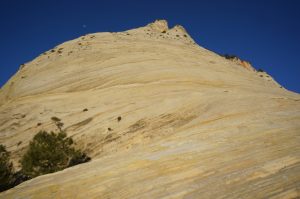 I started with Ares Butte, the hardest of the lot, because this southeast-facing route on white rock would be unbearably hot later in the morning. I parked at a pullout with a wooden fence just west of the Ares Buttes, then dropped into the wash west of the two buttes. After only a few minutes, I zig-zagged up red, then white sandstone to the saddle between the two buttes. Ares’ left skyline looked like it might be climbable, but the route description said to continue around to the other side, past the much more vertical south face. I found some cairns here, and eventually the eye-bolt at the start of the route. It was go time. 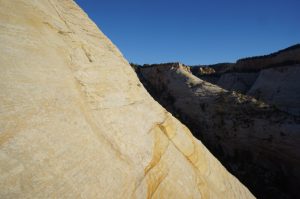 The broad southeast side of Ares Butte has horizontal stripes offering some traction, and various ledges and vertical features providing stances and holds. The “route” is fairly well-bolted, but I had no particular reason to faithfully follow the bolts, and found my own wandering way to either side of them. The route is named “Led by Sheep” because the party who bolted the route supposedly followed a herd of bighorns up the face. While there are indeed bighorn tracks on the summit, I also noticed some carved steps lower down. Sheep are not known for their carving ability, and anyone climbing with a bolt kit would have no need to chip steps, so I suspect local natives may have pioneered this route.

The route ends to the left, with the usual Zion sketchiness of “surprise surfboard” blocks lying treacherously on sandy slabs. A short and cautious hike led to the summit plateau, where I continued north to the highpoint and claimed my Peakbagger Points. The trees were sparse enough to afford views of mostly-higher peaks in all directions, looking more or less climbable for someone like me. Nippletop to the south looked intriguing and, since it lacks a page on Mountain Project, is likely either very hard or very easy. 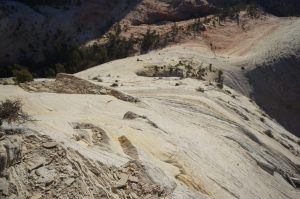 Now I had to get off my plateau. The only option is to retrace the route, and most people seem to rappel, but as I no longer even own a rope, I would be downclimbing. As expected, the descent was probably slower than the ascent, but it never felt tenuous, and I eventually made it back to walking terrain with no near-mishaps. South Ares Butte is not steep enough to attract Real Climbers’ attention, but its north ridge is a fun and quick scramble from the saddle. Its summit lies only a short distance from the road, which was already noisy with traffic and construction. Rather than trying to find a more direct way down, I returned to the saddle and hiked the western wash to my car.

With the day heating up, I headed back east for the partially-shaded north side of Crazy Quilt Mesa. The approach here was even shorter, a mere couple hundred yards of sand-slogging across the road from a parking pullout. I found slings around a couple trees on the broad face, but most of the climbing was just hiking with thoughtful foot placement. Only near the top did I find a bit of trickiness, where the route narrows, steepens, and turns sandy near the plateau. 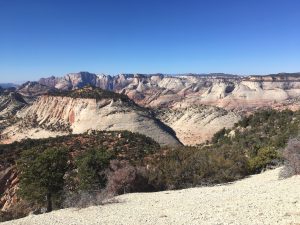 Unfortunately Crazy Quilt’s summit is almost a mile back from the top of its face, too far for most climbers. Curiously, the highpoint also seems to be ignored by peak-baggers: I found no cairn, register, or footprints, and only the lower west summit is noted online. The route is mostly a hike through moderate brush, with one class 4-5 step getting to the final plateau and the two equally-high and mostly treeless dirt knobs of the summit. I had cell service for the first time in awhile, so I burned too much daylight summit-texting before returning to the car.

It was early afternoon by now, so while it would be unpleasantly hot 2000 feet lower in the valley, the Mountaineers Route up Lady Mountain would be entering the shade. This improbable route, constructed in 1924, winds up the west side of the canyon just south of Lady’s summit. Back when fun was allowed to be dangerous, tourists staying at the Zion Lodge could cross the river and climb the face they saw from the lawn via a series of carved steps and a few ladders, protected by bolted cables. No guides, ropes, or waivers were required. Such activities are frowned upon today, and the cables and ladders have all been removed. However the carved steps remain, along with some bolts and fading painted arrows. The route is now mostly class 3-4, with 2-3 short class 5 steps, and feels like it might have been low fifth class even without the carved holds.

I parked at a pullout just uphill of the Scenic Drive junction, then rode my bike the few miles to the Emerald Pools trailhead. Zion Canyon has been immeasurably improved by being closed to cars — Yosemite would benefit from a similar arrangement — and visiting by bike offers both more freedom and less coronavirus than the shuttle system. Weirdly, the shuttles have been instructed not to pass cyclists even when they are riding on the shoulder, and I got yelled at by a park cop in a truck for not pulling over into the dirt to let one by. I locked my bike next to a handful of other normal and electric ones at the empty but not yet decayed trailhead lot, then headed up the popular trail. 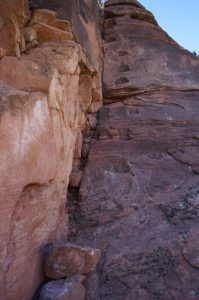 The start of the old route is neither marked nor obvious, though it is clear where it should go. I went too far toward Emerald Pools on the way up, then thrashed up the hillside, following faint game trails until I encountered the old trail just below the first rock band. I was momentarily perplexed, then saw a line of chipped steps higher up, above a start helpfully protected by a large cactus. The recent rains had smoothed the footsteps from the sand, but the route was still mostly easy to follow, and it sees enough traffic to keep the manzanita and oak-brush from completely taking over. The bits of old hardware and occasional painted arrows are also helpful where the route is unclear. 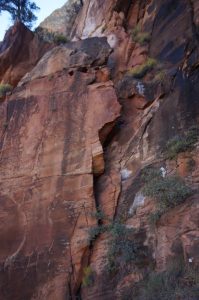 In general, if anything feels harder than about class 3, and there are no chipped steps, you are off-route. The first tricky part is a right-facing corner where the lower steps have eroded. Others have piled up rocks to ease the first move, but I found it more secure to climb up to the right, then make an awkward step/mantle left. The second is a non-obvious slot leading through a red cliff band. I first continued up and right, eventually running into a steep dihedral with some varnish holds that looked far harder than a gentleman of the 1920s would be expected to climb. I almost gave up here, but eventually spotted the faint chipped steps in the slot to the left. After a somewhat tricky entry, easier moves led to another path. 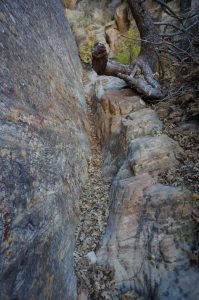 The final tricky bit is a corner with a wide crack and two big steps. Other than a large eye-bolt at its base, there are no chipped holds or other signs of how this was meant to be climbed, suggesting that there was once a staircase or ladder here. I tried it on the way up, backed off, and retreated around the corner to the left to climb a sandy gully, then thrash back to the trail through some horrible oaks. In retrospect, it is easier to figure out the chimney moves and stay on the path. There are more paint arrows and steps, and no further difficulties, above this final obstacle. The only real hazard is a broken-off tree positioned perfectly to spear you in the head if you are motoring happily up the route, watching your footing and listening to peppy music. The trail tops out on a narrow ridge between Lady and Mount Zion to its south, a ten-minute walk from the summit. Perched at the level of the surrounding plateau, the view is far better than that from the much lower Angels Landing. There is even a helpful metal disk cemented to a nearby flat rock, naming the surrounding summits.

The descent, sans oak thrash and avec correct trail, went easily. I enjoyed looking down upon the tourists going to and from the Emerald Pools, oblivious to my presence and the route above. Less than a century before, they would have been clambering up and down this much more strenuous and rewarding route. While I was glad to have Lady Mountain to myself, I was slightly sad to be reminded how mankind had regressed. Back on my bike, I pedaled hard to pass a couple coasting along on e-bikes, then drove out of the park to find a camp spot before my next, more ambitious outing.

Valley from partway up