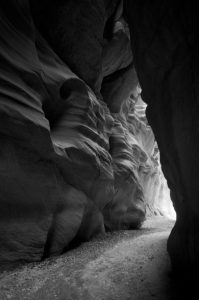 Despite making many trips between the Rockies and Sierra, and even a few to the north rim of the Grand Canyon, I have seldom traveled the route through Shiprock, Page, and Kanab, and have paid little attention to things along the way. While there are some peaks in the area, it is mostly a country of mesas, buttes, and canyons, which have never been my focus. However, when Ted mentioned Buckskin Gulch and the Wave on a recent peak-bagging hike, I decided to pay the area a brief visit. So I assembled a random collection of routes and goals and, after a side-trip for a social hike up Placer Peak near Santa Fe, took off for the Land of Polygamy.

Aside: I am not very familiar with online resources for information on non-peaks. Alltrails.com has a lot of information on everything from Jeep tours to cross-country hikes, wrapped up in a slickly, disgustingly commercial website, but I have no idea of the quality of its information or the nature of its contributors. Hikearizona.com is similar, and at least nominally more local. I suspect such hiking sites are all hopeless. While peak-baggers vary in skill, they all share a simple goal — getting to the top of piles of rocks — so sites like SummitPost, Peakbagger, and ListsofJohn can be focused and useful. The same is true for for climbers and MountainProject. Hikers, however, have too many unrelated goals, many of which they probably cannot articulate. I have sometimes found Strava helpful when looking for run-hikes in unfamiliar areas, probably because it selects for people interested in moving faster than a walk.

I locked my bike to the fence at White House trailhead, then drove around to Wire Pass, which adds several miles to the bike shuttle, but cuts off some hiking miles and possibly offers better scenery. Wire Pass is also the starting point for the Wave, a popular hike to a feature in North Coyote Buttes that requires reservations through a lottery in Kanab. Lottery winners seem to attach large green tags to their packs, making it hard to poach the trail. The trailhead has a large parking lot, regularly filled with day hikers’ cars, but there were only a handful of cars there overnight, so I had a quiet evening.

Utah is on Mountain Daylight Time, so the sun does not rise until after 8:00 this time of year. I could have started by headlamp, but I wanted to actually see things on this hike, so I waited until it was reasonably light, and threw my headlamp in my pack in case I ended up riding back after dark. Different sources listed the route as anywhere from 22 to 30 miles (the former is probably correct), and I did not know what sort of terrain to expect. The first part, descending a well-traveled and -packed wash, was quick and runnable, but most of the rest was slow for various reasons.

Once the canyon narrows, it is impossible to get lost. In the eleven or so miles between there and the Paria River, there is only one way to escape the canyon, a third class scramble leading to the Cobra Arch trailhead. As long as you turn right at Buckskin Gulch, then left at the Paria, you will get to Whitehouse. Though there are a few wider places, most of Buckskin Gulch is twisted and narrow, with only a narrow slit of sky visible, and no direct sunlight this time of year. The gulch appears to follow a natural fissure in the sandstone, between fifty and a few hundred feet deep, that has been widened by millenia of flash floods.

There are a couple of boulder-piles requiring a bit of scrambling, but the route is mostly an easy walk until reaching the Paria. However, both the scenery and the frequent rocky ground make it a poor run. Visiting after the summer rains and before winter’s freezing temperatures, I was lucky to find the wash relatively dry. However, I saw many signs of mud in the canyon, and the one section had to negotiate convinced me that I would not want to try this canyon wet. BLM signs warning that the area’s roads are “impassable when wet” are not exaggerating, and the same applies to slot canyons. I was worried that the viscous clay would steal my shoes, and spent a good half-hour throwing rocks into a short mud bog trying to create steps. Doing the canyon wet would probably require hip waders, or at least galoshes tied tightly to one’s feet.

I met no one before the halfway entrance, one group who had come in that way, and several parties entering via the Paria River. There were a handful of tents about a half-mile from the confluence, where there is dry ground and a small spring. Backpacking the Paria from Whitehouse, either as an out-and-back or a car shuttle to the Colorado, is apparently a popular group activity. However both require a reserved permit (versus a self-issued one for dayhikes), and the latter requires at least one partner. As usual, doing things solo in a day was much easier.

After the mostly-dry Buckskin Gulch, I was momentarily dismayed by the very much not-dry Paria River. But the years have beaten my dislike for wet feet into remission, so I only hesitated for a minute before beginning the slosh. There are probably fifty or more stream crossings between the confluence and the trailhead, the last only a mile from the end. Few were more than ankle-deep this time of year, and there were no extended stretches of walking in the river, but the water is muddy, so its depth is unpredictable. The banks are often either shoe-sucking mud or maddeningly deep sand, so travel is invariably slow. Still, I made it back to my bike by late afternoon, and returned to the car well before dark, for a full but not unreasonable day.

Give me back my shoe!