A roundup of easy thirteeners 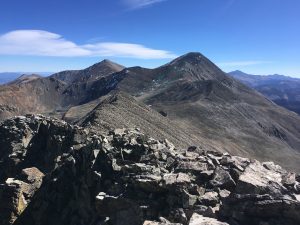 The San Juans were catching on fire, and the Front Range was mostly on fire, so the Sawatch were an acceptable alternative. I had not thought about doing the list of Sawatch 13ers, since there are probably quite a few, and almost all are talus-slogs, so I had not thought about how to do them efficiently. However these four were close to the highway and connected by a ridge, so they seemed like a reasonable loop. I hiked a jeep road and the CDT from Garfield, then looped aroud the peaks before descending to another jeep road. I encountered lots of talus, a few class 3 moves on 13,147, and two people on Aetna, a woman and a man with HAM radio gear. While I summit peaks to turn red dots green on my phone, he does so to talk on the radio from new summits. To each his own.

Aetna in all its glory

High mine near Monumental

Antero, Tabeguache, Shavano, and some 13ers

SE side of Aetna

Mine junk below Aetna 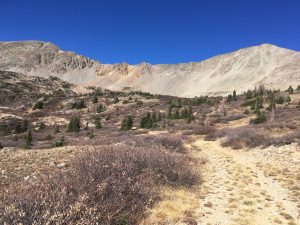 Looking around for something to do the next day, I came upon a group of five thirteeners between Aetna and Shavano, connected by a ridge and accessible via a jeep road starting from the Angel of Shavano trailhead. I ended up doing only Pomeroy and its neighbor, since that allowed me to bike the road all the way to 12,000 feet, and it was unpleasantly windy. This made for too easy a day, but it was good to get out for a nontrivial ride (about 16 miles round-trip with 2500 feet of elevation gain). The Pride of the West Mine showed more pride in its construction than the average Colorado mine ruin, with a substantial stone ruin containing a nicely-built arch with the name on its keystone. There is a road from somewhere to the large Pomeroy Lakes on the other side, offering other approach and traverse options.

Massive slide on the approach 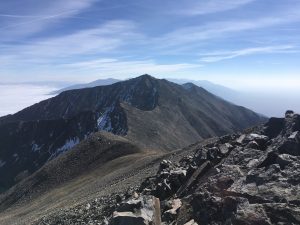 I noticed Bushnell because it has over 2000 feet of prominence, and was along my way at the northern end of the Sangres. Looking it up on the wonderful Climbing Cooneys’ site, I saw that it could be combined with nearby North Twin as another moderate bike ‘n’ hike. The road is ridable (even by me) nearly to the Wilderness boundary, from which an old roadbed continues to almost 11,000′. From there, the climb to Bushnell is steep but easy class 2, mostly on grass with a bit of rock here and there. The descent from Twin Sisters North back to the old road, unfortunately, involves some highly unpleasant loose talus. The ridge between the peaks is easy, but with a cold front approaching, it was unpleasantly windy, with smoke from California blowing into the San Luis Valley, and persistent low clouds to the east.

Old cabin next to roadbed