Hayden North and the OVF 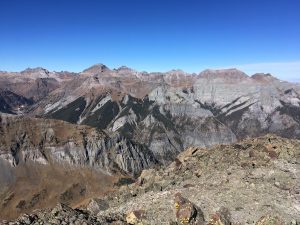 I had orphaned Hayden North on my traverse of the peaks between Red Mountain Pass and Telluride, and wanted to try the Ouray Via Ferrata, so it seemed like a good half-day peak. I found a track on Peakbagger heading straight up a slide path to its east, which I roughly followed. Thanks to plentiful game trails, this worked well, with decent footing on the steep grass, and paths through the occasional willows. 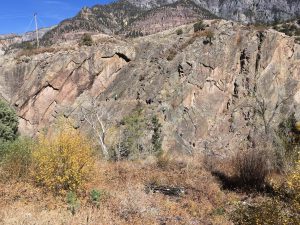 The OVF is on the sunny side of the Ice Park, so it was t-shirt weather in the afternoon. Unlike the ones I had seen in the Dolomites, it was built for tourists rather than WWI mountain troops, so it was both safer and more whimsical, with a cable bridge and ladder. It also had a ranger to make sure that everyone had proper gear; unlike in the Alps, I would not be allowed to scramble the thing. I lucked out by starting just ahead of a large party of newbies, and far enough behind another party that I never caught up with them. 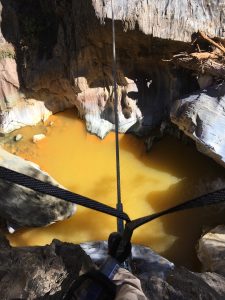 The only sketchy-feeling part of the route was the cable bridge, which tended to resonate. Near the other side, my phone fell through the hole in my right pants pocket and, not tethered by my headphone cord as it usually is, fell into the disgusting yellow Ouray water. I saw it lying in a few inches of water, but not sure what to do with the horde bearing down behind me, I hurried on. I figured it had already either cracked or drowned, and that more time in the water would not cause any further harm. I imagined what a fall would feel like at various points, and there were only a few where one could suffer any real damage.

Being a rule-following person, I stayed clipped in with at least one lanyard, even when the route was just a trail. It was interesting to see the Ice Park without any ice, and recognize the rock underneath the various climbing areas. I wished I had my camera to capture the slot canyon in its fall color, but it was underwater. I finished quickly, then hiked and jogged back to the entrance. The ranger did not object to my scrambling down for my phone, so I went down the first part, hopped across the stream below the cable bridge, and fished what I presumed would be a corpse out of the water. Amazingly the thing came to life, prompting me to listen to the next podcast. I quickly turned it off to dry without frying any components, trying it periodically over the next couple of days, and it amazingly came back to life, with no more than a minor blemish in the screen. I will be sad to see my iPhone SE die, since it is the last good phone that Apple made: small enough to fit comfortably in a pocket, easy to grip with squared-off sides, and having a headphone jack. Hopefully it will survive at least another year or so, and I can pick up a refurbished iPhone 12 Mini once its price drops. 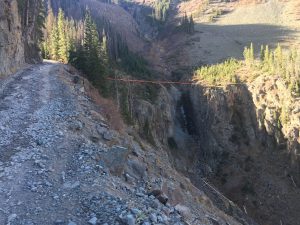 These two thirteeners, on opposite sides of Maggie Gulch, looked like they would make another good bike ‘n’ hike. I was less than enthused to have neighbors at the base of the gulch, but they were quiet in the evening. I took my time getting ready the next morning, since it was cold and shady. As I prepared one of the neighbors came over, a woman with dreadlocks who introduced herself as Brett. She asked if I would be around that afternoon to jump her car, which seemed to have a dying battery. Noticing the ATC clipped to her pocket, I asked what she was climbing in the area, and she turned out to be one of a group highlining across Maggie Gulch. 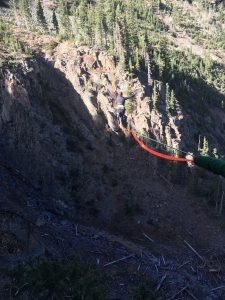 I eventually started up the road, hiking the steep parts and looking over to spot the line. I eventually did: a thick rope and some tubular webbing stretched across the canyon near some waterfalls, several hundred feet off the ground. It was windy, with the gusts blowing the webbing out sideways from the main line. Amazingly, one of Brett’s friends was trying to balance across, barefoot for better feel and grip. I watched her repeatedly fall on her tether, flip back up to sit on the rope, then cautiously stand and keep walking. I could not imagine enjoying this even if it were warm and calm; it seemed crazy in the cold and wind.

The peaks were pretty standard fare, made a bit more difficult by my phone having a fainting spell, leaving me map-less. This is how I used to bag peaks most of the time, and I still mostly remember how. Riding down the road, I ran into the highliners, and stopped to talk for a bit. I had been puzzling over how they set up the line (bow and arrow? trained bird?), and they told me they hiked down into the gorge and back up the other side, towing a thin line that they then used to drag the main one across. This process took some six hours and sounded a bit sketchy; they were thinking of using a drone next time. We talked a bit more down at the campsite, then they split for home, and I went on to the next gulch.

This entry was posted in Colorado, Tourism. Bookmark the permalink.