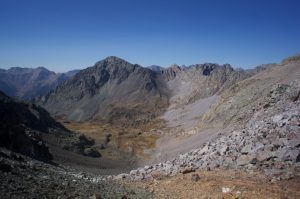 On our second peak-bagging day we headed up Rock Creek to tag peaks around Oso, some of the state’s most remote mountains. I had done Oso itself via the Los Pinos river, a long but pleasantly ford-free approach from the south, and had recently failed to reach Irvine via Cave Basin and a series of peaks to its south. I was highly motivated to tag it, “Weminuche Peak,” and another unnamed thirteener on this trip, thereby finishing the area and avoiding future headlamp time. After our normal breakfast — oatmeal with granola for me, and a thick paste of peanut butter, granola, and protein powder for Dan (even he hates it!) — we started hiking up the Rock Creek trail. 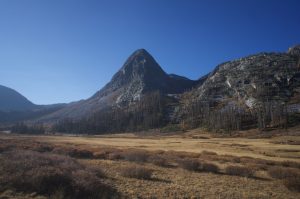 Rock Creek is an ancient glacial valley like most in the Weminuche, and after the initial steep rise from the deep Vallecito, it opens and broadens, with frequent glacially-polished slabs evincing how it was formed. The north side is an unremarkable talus mound, while the south is a series of interesting-looking peaks formed from the same uplift as Leviathan and Vallecito to the west. Each of them, from P1 in the west to Peters in the east, has its own unique character, dependent upon the angles of the rock layers and subsequent erosion. P3 falls just short of being another Arrow or Vestal, with its strata being slightly too steep and twisted to form a steep face. Perhaps the drainage’s most striking peak is Buffalo, a minor subpeak north of Peters protruding into the valley, with a steep north face nearly a thousand feet high. 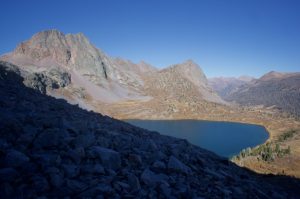 We filled up on water at Rock Lake, then parted for our own individual objectives: Dan sensibly wanted to tag Oso, the area’s highpoint, while I aimed for its minor neighbors. It seemed like the trail should circle west of the lake, so I started off a few hundred yards that way before looking at my map and realizing that it actually went the opposite way. Though the Rock Creek trail is clear and well-maintained, with culverts at several water crossings, the trail over the pass to Lake Creek and Emerald Lake is much fainter. I am not sure why Rock Creek receives such attention, since it seems like just another random connector between two remote valleys in the wilderness. 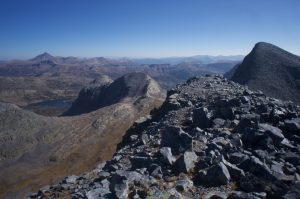 Once at the pass, I left the faint trail to head cross-country straight for Peak 13,120. Most of this area consists of some type of talus; in this particular case it was large, semi-stable basalt, moderately unpleasant but not truly maddening. After the initial steep climb, the route flattened into a broad summit plateau. Both this peak and neighboring Weminuche have the steep north faces common to peaks in this area. I admired the cold side of the mountain, with its patchy lingering snow, then continued east, staying near the edge where there was more solid rock than talus. 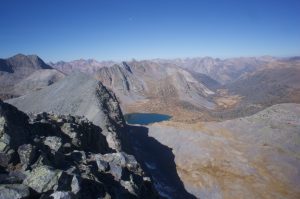 Weminuche is slightly higher and looser than 13,120, but only a short climb from the connecting saddle. Along the way, I paused to look south past a small lake to Emerald Lake, by far the area’s largest natural lake. From the summit, I had an unobstructed view northeast across high rolling terrain to Rio Grande Pyramid, with its distinctive south ridge and “Window.” I am becoming familiar with the local peak-bagging obsessives through the registers on these obscure peaks, and noted that Mark Ott had chosen this peak to finish the Weminuche 13ers, a list I hope to someday complete myself. 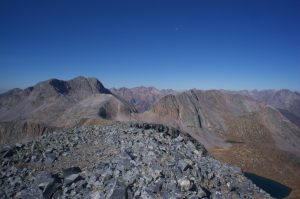 Returning to the saddle, I contoured around 13,120, then dropped to pick up the trail at Half Moon Lake. Along the way I saw a speck that was almost certainly Dan, finally done with the long traverse and starting up Oso’s south ridge. Knowing nothing about the peak, I had climbed it via its east ridge, which involves some fourth class shenanigans; his route seems to be standard, both easier and less pleasant. Oso is composed of loose talus on its south and west faces, making for miserable but moderate climbing. 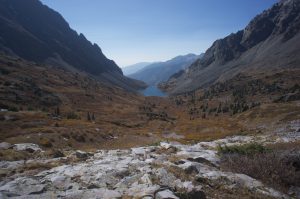 Based on my observations from the summits, it seemed fastest to follow the trail partway to Moon Lake, then side-hill around into the valley leading to the col between Oso and “Soso.” The valley itself is pleasantly grassy, with a couple of small streams running even this late in the season, but the climb to the col is miserable loose rock at the junction of two formations. I found a cairn at the saddle, then found that the other side was even worse, a steep slope of slippery, unstable quartzite talus. I made my way carefully through this tedium, skirted a trick meadow that was actually a bog at its base, then circled around above Irving Lake to the valley northeast of Irving. 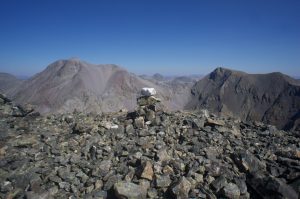 I had thought of trying to make the climb a bit more interesting by ascending the east ridge, but it looked jagged and rotten, so I followed the known route to the saddle north of the summit. The slope was more stable than I had feared, but turned into surprisingly steep third class grass near the top. From the ridge, it was mostly easy walking with occasional bits of use- or game-trail to the summit. From the peak’s various humps, I had views south to Vallecito Reservoir, west into Johnson Creek and back east to the hanging valley of Irving Lake. 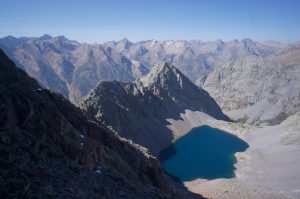 Most of the way back down the ridge, I shouted and heard first an echo, then a response. I sat down to wait, and a few minutes later Dan emerged at the saddle. He confirmed what I suspected: that Oso’s southwest side is a miserable pile of loose rocks, a nightmare to descend. While he went off to tag Irving, I went the other way to tag “Irving North,” a minor peak with views of Hidden and Lost Lakes, two seldom-seen bodies of water hidden in north-facing hanging valleys. 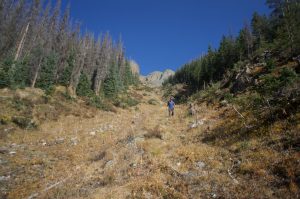 The obvious return path, via the Oso-Soso col and the trail to Rock Lake, seemed both long and unpleasant, so I had been thinking of another way back. Had I not encountered Dan, I would have traversed the line of thirteeners between the two lakes, then descended north to Roell Creek and the Vallecito. However, I had noticed that the slope directly west looked promising, with a grassy avalanche path leaving a clear route for most of the 3500 feet down to the Vallecito trail. This would deposit us near the Johnson Creek trail, a mere 4-5 trail miles from camp. 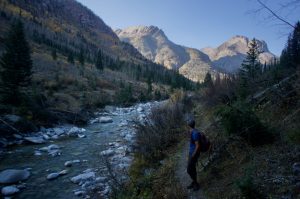 Dan and I reunited at the edge of the slope, then started down. There were a couple of unpleasant sections of steep gravel, and one cliff-band lower down, but for the most part it was easy terrain until we reached the aspens closer to the valley floor. Just below the cliffs, I spotted a game trail and followed it south into the woods. Here an excellent series of game trails led down through the steep, open woods, carpeted in fall leaves. With only a bit of deadfall to contend with in the valley bottom, we reached the trail.

Though we could clearly see the Guardian’s south side rising above our camp, we still had a fair amount of hiking to do. The bottom of the deep valley soon fell into shadow, but the surrounding mountains caught the sun for most of the walk. The rocks in Vallecito Creek are stained bright white by some mineral, suggesting that, like Rock Creek, it would be unpleasant to drink, so we filled up at Roell Creek along the way. Again reaching camp at dusk, we had our monotonous dinners and lay down for another long night.