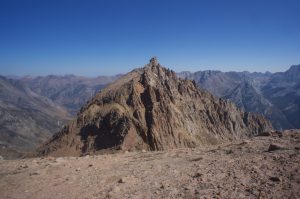 With the approach and load-hauling out of the way, it was time to start bagging peaks. First up were Greylock and an unnamed thirteener neighbor, on the south side of Sunlight Basin. I had only been to the basin from the south via the 13-mile Vallecito approach, so it was a pleasant change to hike only a few miles before crashing through the woods to the creek junction. The water in Rock Creek where we camped is unpleasantly metallic (and turns the rocks orange), so we both filled up on clean water before starting up the well-worn use trail. 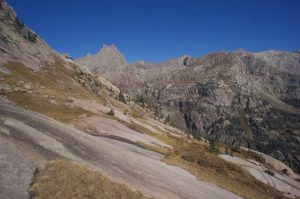 We left the trail where it crosses to the south side of the stream, heading through steep woods and then up slabs toward the col west of Peak 13,121. We frequently looked back at Jagged and Peak Ten as we made our plodding way up 2000 feet toward the saddle. Just below the crest, we headed up a break in the peak’s cliffs to reach the sandy plateau below its summit knob. Reaching the true summit involves a bit of non-exposed class 3 scrambling if you do it right, or some exposed class 4 if you do it my way. In either case, the unnamed 13er has interesting views in all directions. To the east, the ridge falls off in a series of reddish granite blobs, reminiscent of nearby Organ Mountain. Looking the other way, one has a clear view of broad Sunlight Basin with its open grass and granite slabs. Leviathan and Vallecito Peaks, part of the ancient uplift that forms the Grenadiers, make up the northern view east of Jagged. 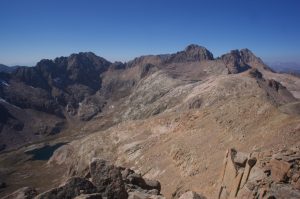 Returning to the saddle, we made our way up choss, turf, and boulders to neighboring Greylock. Its summit sits at the junction of the ridge extending past 13,121, and a long ridge southwest to (unranked) Thunder Mountain. I had thought of doing Thunder as a quick out-and-back, but the slightly higher and much more rugged point 13,140′ gets in the way. It looks like Thunder is probably best reached via Johnson Creek, Grizzly Creek, and its east flank and ridge. 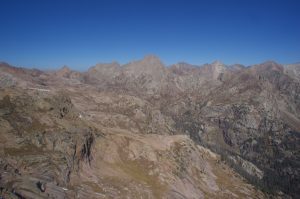 Dan had originally wanted to climb Peak Ten, Jagged’s impressive neighbor and a supposed class 3 scramble. However our pace and the short days did not leave enough time to go all the way across the basin, so we decided instead to tag “East Windom,” the next bump west along our current ridge. A short distance along the ridge, we were surprised to run into a guy out for a hike, with nothing but a belt pack and a jacket tied around his waist. He turned out to be a Durango local, spending the week with his girlfriend camped at Sunlight Lake. After talking for a bit, he continued on to Greylock while we headed west. 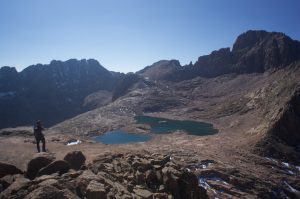 With time to spare, I decided to pay a visit to the lake at the base of Windom’s east face. At 13,100′, this is perhaps the highest lake in the United States, and a decent-sized one at that, with two lobes and an island in the larger one. I took some photos, refilled my water, and resisted a faint urge to swim. From there, we wove down some cold slabs to Lake 12,545′, then more steep terrain to Sunlight Lake, where there was a single tent and a person. We chatted with her across the lake for a minute, then circled around to pick up the use trail. Just before reaching it, we again met the guy we had seen earlier on the ridge. Displaying a sad lack of peakbagging drive, he had not continued to 13,121, wandering back from Greylock with plenty of daylight left. We gave him the latest forecast and unexpected good news from the outside world, then took off down-canyon. 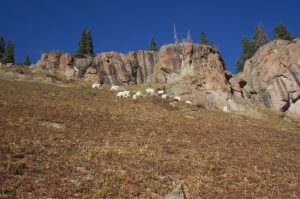 Just below the lake, we were surprised to run into a herd of more than a dozen mountain goats. They are fairly common in this part of the San Juans, but I am more used to seeing them in small groups, often a nanny a her kids. As usual for mountain goats, they were not afraid of us, but unlike the tame ones in nearby Chicago Basin, who approach in hopes of food or pee, they kept a respectful distance. Beginning a pattern for the trip, we reached the tent around dusk, making the most of the short days without continuing into headlamp time. We had our usual dinner — grits and sausage for me, a gallon bag of flavored mashed potatoes for Dan (ugh!) — then killed some time looking at our phones before setting into our bags for too many hours of semi-sleep. With the tent zippers closed tight, and a stiff corpse outside as a warning, there were no more invading mice.