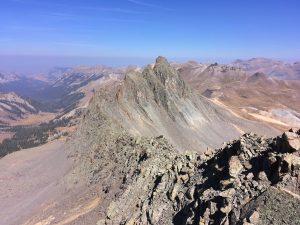 For our third and longest day in the Cimmarons, we headed over to tag a few thirteeners around the middle fork of Cimmaron River. Peaks 13,206 and 13,377 are unremarkable from most vantages, but Heisshorn looks impressive from pretty much any direction and, though easier than Coxcomb, is supposed to be one of Colorado’s harder thirteeners. On a clear day, all the peaks have impressive closeup views of Wetterhorn. 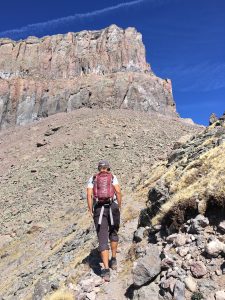 Anticipating a long day, we got a non-pathetic start, leaving the vehicles before 8:00 and once again successfully crossing the creek without soaking any feet. The hike up the basin was starting to get old for me, but I do not plan to return anytime soon, and it is fairly quick and painless. We headed into new territory on the other side, descending into Wetterhorn Basin past the signed but near-invisible Cow Creek trail. Cow Creek, despite its bland name, is supposedly an interesting feature, a deep valley with steep, complex walls. There was a much larger herd of bighorns south of the pass, hopefully hard at work improving the direct traverse to Coxcomb. 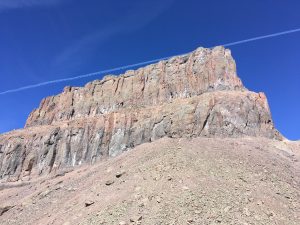 We crossed the basin to another trail junction, then followed that trail toward the head of the center fork of the Cimmaron. Trails disappear quickly in the meadows here, so they are marked by posts held up by piles of rocks. This trail faded in and out of existence despite a moderate amount of use, but the posts were in good shape and well-spaced, making it easy to follow. Looking at a map, the area has an incredible number of trails, likely making it a great destination for trail runners. Some of them may be “of historical interest,” i.e. not maintained in decades and almost nonexistent, but many seem to be usable, traversing gentle alpine terrain between the wooded valleys. 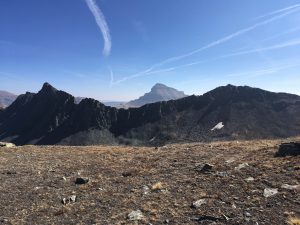 We left the trail at the pass, traversing around the head of the basin toward Peak 13,206. There was some dinner-plate talus on the way to the summit, but nothing truly obnoxious. The ridge turns looser and slower toward 13,377, with an intermediate bump and some pinnacles and cliffs to deal with. Game trails help here, as it is not always possible to follow the crest, and crossing the steep, loose sides would be tedious without them. Early September’s snow had mostly melted, but what little remained on north faces was too hard to kick steps. 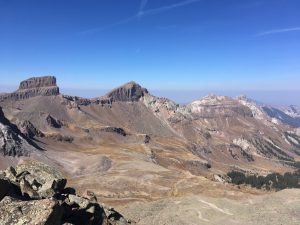 After a final bit of horrible choss, we emerged on the connecting ridge to Wetterhorn just south of the summit, a short tundra-walk away. I had been eyeing Heisshorn’s south ridge for much of our time in the area; it is intimidatingly steep to the west, with a large and miserable-looking talus fan below, and three sharp notches. I had hoped that the other side was gentler, but it is similarly steep and guarded by talus below. It looked like it might be doable, but the first part looked like tedious loose talus, there were no good opportunities for escape farther along, and the whole thing definitely looked no easier than low fifth. Dan was not interested, and I was not in the mood to experiment, so we retreated toward Wetterhorn, then dropped about 1,000 feet around the east side to join the standard route. 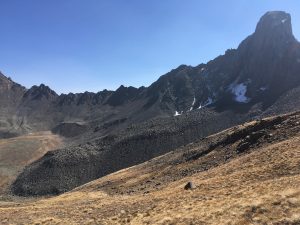 We skirted the base of a large talus-fan, then started up a spur ridge that joins the main north ridge well above the trail pass between the center and west forks of the Cimmaron. The climbing was mostly loose class 2, with a bit of class 3 possible to avoid the talus here and there. Wetterhorn’s shaded north face was an impressive though not photogenic sight to our left, rising about 1000 feet from a pile of loose rock, with a small permanent snowfield on one side. It looked like something that had probably been climbed (in fact it has), but not for the likes of me. 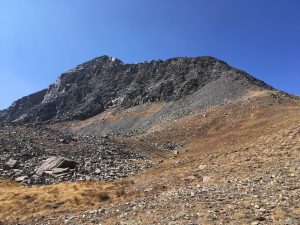 Heisshorn’s north ridge is nearly as narrow as its south, but much shorter and without the notches. Most of it is class 2, with some fun exposed sidewalk sections near the start. The final climb is class 3, either on or slightly left of the crest, on fairly solid rock. I enjoyed finding more good scrambling after so many talus-pile peaks; Dan, who has been doing much less of it lately than I, took his time to adapt. Reaching the summit, we found a register in a thermos, placed just a couple months earlier, that already had multiple parties. I was surprised that this minor, relatively remote and challenging thirteener had seen so much traffic. In the Sierra, a similar non-SPS peak could see less than one ascent per year. 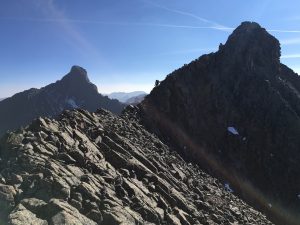 We retraced our path down and across the sidewalks, then took the main ridge toward the pass, finding multiple sets of footprints. We also saw two parties crossing the pass: a couple with a dog, and a group of four less than an hour behind. Like the Climb13ers folks, we shortcut the trail, plunge-stepping down some unpredictable dirt and scree toward the grass below, finding another line of posts and intermittent trail. It might be possible to cut around the head of the valley, but it looked just as fast to drop down to a trail junction, as our return trail climbed the far side to cross the pass next to Coxcomb. 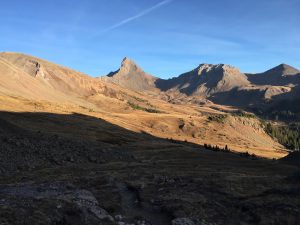 I blindly followed the line on the USFS topo, which is wrong lower down but more or less correct higher up; fortunately there are also posts, and there is only one obvious way to get through an intermediate cliff band. Despite being faint in the valley, the trail seemed well-used in this section as it crossed a boggy stream through some willows. I was getting anxious about our return time, as I had neglected to bring a headlamp, but the view of evening sun hitting Wetterhorn’s west face made the late return feel more acceptable.

Crossing Wetterhorn Basin, we heard voices, and eventually spied a large group hanging out in the talus below Coxcomb, evidently returning from a successful climb (without the big rappel). Despite having only daypacks, they seemed in no hurry; I looked around for tents and, seeing nothing obvious, shrugged my shoulders and continued toward the pass. We weren’t exactly fast up the 400 foot climb, but managed to jog a fair amount of the trail on the other side. We reached the trailhead around dusk, and oddly enough passed a couple of other people hiking the road in the other direction. Headlamp time consisted of about thirty seconds crossing the stream back to the cars. As I was falling asleep, a couple of vehicles passed on the way out; perhaps the large party we had seen below Coxcomb enjoyed evening headlamp, or had waited for the nearly-full moon to finish their hike.