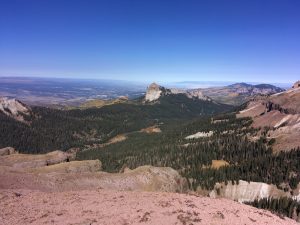 The Cimmarons are a subrange of the San Juans east of Ridgway, visible from highway 550 as a striking line of summits banded by rotten-looking cliffs. I had driven past them any number of times on my way between Ouray and Grand Junction, but for some reason had never paid them a visit. Dan had expressed an interest in spending some time there as well, so they became part of my smoke-avoidance plan. They are not particularly high, and most of the rock is too rotten to offer safe scrambling or climbing. However, they are both quiet and scenic, especially this time of year when aspens turn, with striking conglomerate cliffs and fields of hoodoos. 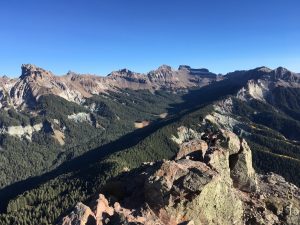 After meeting Sarah near Ridgway, we headed up the good dirt road to Owl Creek Pass, entering the National Forest and passing through miles of aspens. By far most striking feature on the drive is Chimney Rock, a conglomerate tower at the end of a ridge north of Courthouse Peak, and a difficult climb from any side. We met Dan at the end of the good road, then took off hiking up a worse road to the Wetterhorn Basin trailhead around 10,700′. I had been comfortable starting from Molas Lake around 10,500′ in my normal summer gear (wool shirt, windbreaker, gloves), but this north-facing basin turned shockingly cold, and I hiked the first hour unhappily unwarm, with my gloved hands shoved in my pants pockets. Perhaps it was time to admit that it was no longer summer and break out some winter gear.

We eventually left the trail to follow a dry streambed just past Fortress’s west ridge, where it is possible to pass the cliffs guarding its south ridge and summit. The streambed avoided the ubiquitous deadfall in the woods, but was filled with loose rocks freed from the conglomerate above, and therefore slow going. Sarah kept her friendly but evil-looking dog mostly on its leash, which I thought unnecessary at the time: dogs are supposed to wander around and ineffectively chase small mammals on hikes. 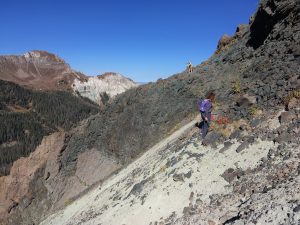 Passing through the cliffs, the route stays left of a gully most of the way, then crosses to the right below a lower cliff-band to climb some steep grass. While there are numerous game trails in the area, and I found sporadic footprints, there is no well-cairned and -trod route up the peak, a welcome change from the more popular Grenadier peaks. Dan and I crossed the steep drainage at a likely-looking place, but Sarah’s dog was having none of it, frightened by the steep ball bearings over hardpack. This surprised me, as I normally assume that dogs can handle anything humans can up to easy third class, but we were dealing with a city creature, still learning her ways in in the mountains. 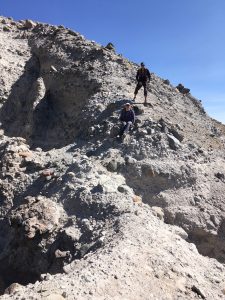 Above the crossing, the easiest route traverses right a bit, then climbs a class 2-3 break in the upper cliffs. Dog and humans safely through, we continued up the long summit scree-field, straying too far right into miserable terrain before finding a faint trail on the slightly grassy and more stable left edge. A final chossy and exposed saddle caused the humans more problems than the canine: dogs don’t understand exposure.

The true summit is one of a couple of incipient conglomerate hoodoos protruding from the peak’s main body. I hopped up on one to admire the large detached pillar to the northwest that looks equally high, and the precipitous north face. Farther north and west, the west fork of the Cimmaron River is flanked on one side by the ridge from Courthouse to Chimney Rock, and on the other by Precipice, Dunsinane, and a supposedly difficult 12er. The valley itself, and the slope to the west, are covered in aspens that were nearing their peak fall colors. To the south, Redcliff dominates the view with its intricately eroded north face (the south side is a pile of boulders). Wetterhorn and Uncompahgre, two fourteeners I had climbed long ago, stand nearby to the southeast. 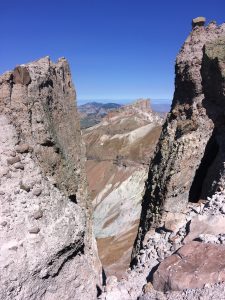 After some time on top, we descended the faint trail along the stable ridge, then turned to weave through the cliff bands. Sarah’s dog seemed less nervous by now, though downclimbing is difficult for four-legged creatures, and she seemed close to going head-over-heels on some of the slabs. Down in the woods, the leash demonstrated its value in two ways: first, the dog was too independent for its own good, wandering off heedlessly to follow scents; second, we ran into a porcupine in the valley, which could have caused a world of hurt. I have encountered porcupines a few times in Colorado and Wyoming, and have found them to be neither aggressive nor in a hurry. This one waddled away about as fast as it could (about a brisk walk), with Dan in pursuit trying to get a good photo. We hung out for awhile back at the cars, then Sarah, being a normal member of society, returned to town. Dan and I quickly tagged Courthouse via the trail then found some better camp spots to spend another few days in the Cimmarons.

Redcliff and Coxcomb from Fortress