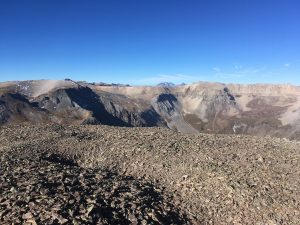 The line of peaks west of Red Mountain Pass demonstrates perfectly how Colorado has so many 13ers, including 264 in the San Juans alone. Between Ouray and Ophir Pass, there are about a dozen points along a high, broad ridge, each rising no more than 300-500 feet — just enough to count as “peaks.” None is particularly notable or difficult, though all have fine views of the surrounding rotten, colorful cliffs and slopes. With a short and fun bike shuttle, I was able to easily summit eight of them in a day, from Hayden to Three Needles, going in via Richmond Pass and out Porphyry Basin. Only two sections were harder than class 2: a short stretch between T8 and T7, and the summit knob of Three Needles, which would have been class 2 if I had gone around the west side. 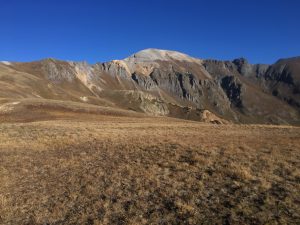 After my pathetic showing the day before, I got a respectably early start, sleeping where I left my bike on the Black Bear Pass road, driving down the north side of Red Mountain Pass in the morning, and starting shortly after headlamp time. The Richmond Pass trailhead is not obvious: I parked at the Ironton road, then followed some flagging and old mining roads back south through the woods until I ran into the obvious and well-used trail near the trail register, located some 100 yards into the woods. Once on-route, I motored up the pleasantly steep switchbacks, which climb through a large aspen grove from the road all the way to treeline, from which the pass and Hayden Peak are visible. 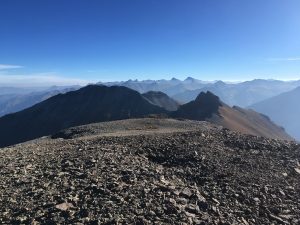 Hayden North, plus Wetterhorn and Uncompahgre

From the saddle, the main trail continues to join the Imogene Pass road, but an obvious use trail takes off along the ridge, skirting some choss pinnacles before switchbacking up the final talus-pile. The pleasantly sharp peak I had seen from below turned out to be an obstacle instead of Hayden North, so I dismissed the though of adding another peak to my day. The Imogene Pass road was already seeing some traffic, though the Jeeps were too far away to be heard over my music.

Returning to the pass, I followed the trail a short distance, then gained the ridge at a bump before T8. The crest became narrow and chossy, then broadened again as it merged into the gentle summit mound. Unlike on Hayden, I found a register, and was surprised to be once again following a familiar (possibly unintentional) self-parody: 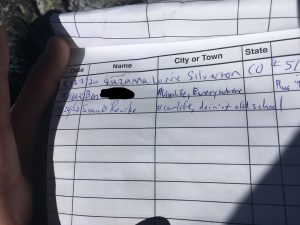 Name redacted to protect the ridiculous

I dropped off the broad summit plateau toward T7 on a faint trail, crossing the saddle and continuing along the narrowing ridge. I was surprised to find some third class difficulties in this section, weaving around choss towers; equally surprising were the survey stakes along the way, possibly marking the boundary of the expansive Camp Bird Mine. Past the difficulties, it was another easy walk to the summit, where I was once again preceded by Señor Hashtag Vanlife. 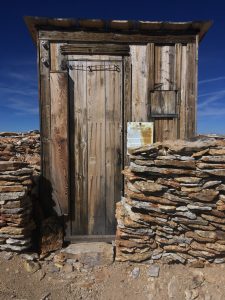 From T7 I approached Imogene Pass, where a half-dozen Jeeps had stopped so the intrepid explorers they contained could admire the conquered mountains. I climbed a nameless point near the pass to examine a structure I had seen, finding what looked like a well-built outhouse surrounded by a rock wall. It was signed as “historic,” and I couldn’t see inside well enough to count the holes. Thanks to the line of sight to Telluride, I had cell service for the first time in awhile (Boost Mobile, overpriced garbage that it is, does not offer service in Ouray or Silverton, among many other small towns). From this bump, it was a short hike to Telluride Peak, which is unranked thanks to having a neighbor a single foot higher. 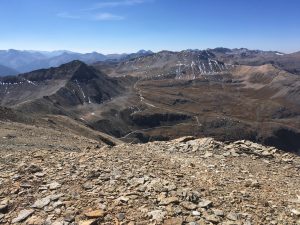 From the summit of Telluride, Peak 13,510 and Trico (short for Tri-County?) were easy going. I crossed a trail pass on the way to Trico, inhabited by a curious raven who followed me for awhile and seemed to almost want to land on my hand. Trico is just north of Black Bear Pass, a popular and supposedly difficult 4WD route, so I passed a couple of Jeeps and an old Chevy at the saddle. The road would be the most direct route back to my bike, but the day was young and I was feeling fresh, so I decided to continue to Porphyry Basin, one ridge to the south. 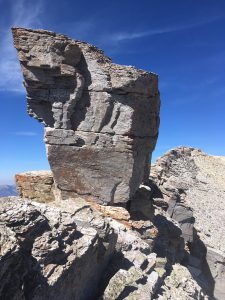 T10 has two summits of equal elevation, separated by a broken ridge. The northern summit has a faint trail worn in by Jeepers, though the climb is still unpleasantly loose. The ridge has no such path, and requires a bit of scrambling to stay near its crest. I had seen a large balanced block from below, and wondered if I might be able to tip it; unfortunately when I reached it, I found it was far too large to tip, and too steep to climb. I continued to the other summit, then descended another easy ridge to the saddle with Three Needles. 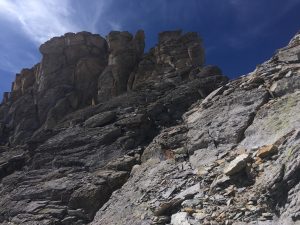 Porphyry Basin also had a few 4WDs, but the road does not cross to the Telluride side, and there is no trail over the saddle. Three Needles’ summit rocks looked hard, and the ridge leading to them was unpleasantly steep and loose. I slogged up the loose stuff, all the while wondering how I would reach the summit. From this side, Three Needles’ summit is a handful of broad pinnacles separated by gullies. The entire thing is made of rotten, layered rock that slopes downward to the east, like a leaning stack of crumbling dinner plates. It’s the kind of rock I dread, but know all to well; I’ve done the Eiger — I’ve got this!

I first tried traversing all the way around to the south ridge, finding one cairn and a couple stacks of more than one rock that could have been either cairns or natural features. I saw a likely gully leading to the crest, but was turned off by the steep, crumbly downclimb into it. I tried an option right of the gully, but was stymied by a gap and a sketchy bulge. Next I tried to follow a couple of seams just left of the summit, but once again the bulges felt a bit too steep for comfort. The key to climbing this sort of rock is using counter-pressure; ledges and faces that would be easy on solid stuff feel unpleasantly insecure. Finally I retreated past the cairn, and made my way up a gully and chimney that landed me just north of the summit, which was probably low fifth class and left me with some scrapes on my forearm. 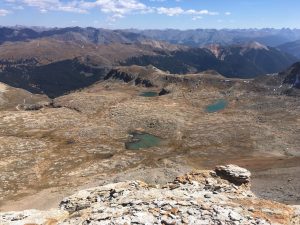 Reaching the summit, I saw the three needles on the other side… plus a gentle scree-slope that left me feeling like an idiot for going up the hard side. I snapped a quick photo of Blue Lake to the west, then circled around the south side and dropped into the gully I had first tried. The downclimb that had intimidated me was easier on the way up, almost certainly easier than the route I had eventually tried. I circled back around past the cairn again, then boot-skied down the loose eastern slope to the grassy plateau.

Taking off cross-county toward the parking area, I grabbed some water at a stream, then descended through a couple of easy cliff bands to reach the road. From there it was a fun, fast run to my bike. I thought I would have to take the Red Mountain Pass road from Porphyry to Black Bear, but some recent-looking grading activity has connected the two roads. I reached the pass with only a bit of pedaling, then had a fun four miles’ descent, coasting past aspens and swooping through the “10 MPH” gooseneck turns at quite a bit more than 10 miles per hour. Even this late in the season, I returned to the car well before dark. With a bike staged near Ophir Pass, it would be fun and very doable to traverse all the way from North Hayden to Lookout.

Hayden North, plus Wetterhorn and Uncompahgre

Do it for the ‘gram

Name redacted to protect the ridiculous

Back at the start