After a rest day, I continued my tour of the once-a-year Weminuche approaches, driving around to Vallecito Reservoir to tag a trio of peaks near Jagged Mountain. Vallecito is by far the worst of the long approaches: horse traffic, mostly from hunters, has turned the trail into a mess of polished stone, loose rock, and manure; and there is a knee-deep ford about six miles in, followed by frigid meadows, that must be done during the coldest part of the day. However, it is the only dayhike access to Johnson and Sunlight Creeks, so I have been forced to use it several times, first for Jagged in 2012, then for Grizzly and the other eastern Needles peaks. 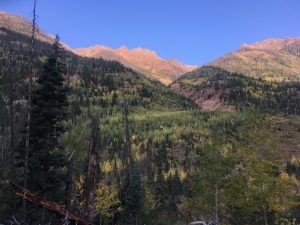 Unlike last time, I was visiting early enough for the campground to still be open (and crowded), but the routine was the same: start an hour and a half before dawn, do the ford shortly after headlamp time, then suffer for awhile. I grabbed a stick, rolled up my tights, and waded across with shoes and socks on. I knew this would be hard on my feet later in the day, but fording in shoes is much safer and faster. I quickly wrung out my socks once on the far bank, mindful that the clock was ticking for my hands, then jogged the meadows to try to stay warm. My hands were cold and painful most of the way to Johnson Creek, but I thought I fared about as well as I could have. 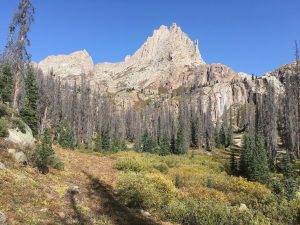 Sunlight Creek is another three miles beyond Johnson, so I had plenty of time to watch the sun slowly creep down the other side of the valley, illuminating a mix of aspens starting to turn and evergreens half killed by bark beetles. This part of the San Juans has fared better than areas farther east, but the pests have left their mark. I left the trail before the stream junction, near a hunter with two large canvas tents, then hiked upstream through the woods, looking for a dry crossing. Thankfully this is not the North Cascades, so it is possible to walk next to the Vallecito with only minor thrashing, and to clearly see the stream junction. Thanks to the low water, I was able to hop across the Vallecito on rocks, then cross Sunlight Creek on logs, picking up the now-well-defined trail. 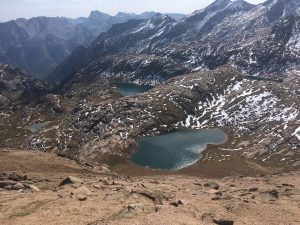 I was once again on the bizarrely-named “Kodiak High Route,” which apparently traverses the central Weminuche from north to south, crossing between Vestal and the Trinities, then Peaks Seven and Eight, then Six and Leviathan before descending Sunlight Creek. Doing it by itself, without climbing neighboring peaks, seems absurd to me, like spending days wandering through a department store without buying anything. I knocked down all the cairns on the way up the creek, an empty gesture as the trail is thoroughly beaten in and nearly impossible to lose. Still, after seeing the large deadfall cut on the Vestal Basin approach, it felt good to make some symbolic gesture toward defending formerly wild places. 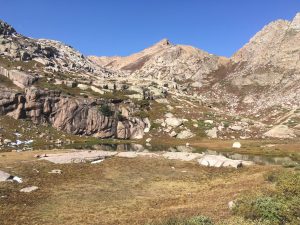 Where the trail branches to either side of Jagged, I headed left, following a path that leads to Sunlight Lake. I left the trail below the lake, following a small stream past two other minor lakes toward Knife Point. While it may be impressive from the other side, from this side it is a rounded butter knife of decomposing granite. However, the area’s several lakes and open mix of granite slabs and grass are unique in the range, reminiscent of the better parts of the High Sierra. 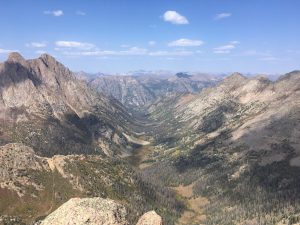 Rather than gaining the ridge to either side of the peak, I headed straight toward the summit, climbing a steep slope of kitty litter mostly held in place by bunchy vegetation. I passed a mountain goat and two kids along the way, who were unconcerned by my presence, but kept a respectful distance rather than approaching to beg for food or pee. The plants eventually gave out, and I transitioned to granite knobs and boulders for a short climb to the summit. There was no register, but the views were worth savoring for awhile. To the south, a clean, sharp ridge connects Knife Point to Sunlight, which looks like it might be fourth or low fifth class from this side. To the north, a more complicated ridge extends over Peak Ten to Jagged’s west side. To the west, the peak is at the head of Noname Basin, with the high Needles peaks of Animas and Monitor to one side, and the Grenadiers peaks from Six to The Heisspitz to the other. 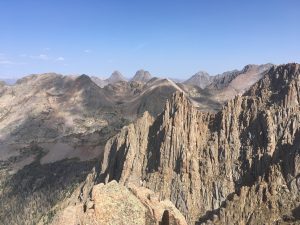 I took a different line on the way down, connecting sections of deep sand to quickly plunge-step to the base. From there I stayed high around Jagged’s east side, joining the well-defined trail leading to the base of its standard route. The trail seemed to disappear before the basin and small lake below Jagged’s north face, but it was easy walking toward the saddle west of Leviathan. Rather than starting at the saddle, I headed up more bunchy turf toward a subpeak on its west ridge. Slopes that would be bare and loose in the Sierra, or overgrown with slick grass in the Cascades, are pleasant climbs with Colorado’s intermediate level of moisture and vegetation. 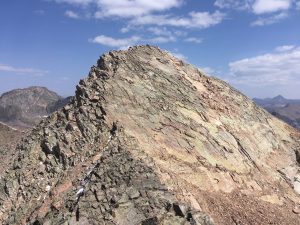 As I neared the subpeak, I was surprised to see another person descending, only the second I had seen all day. He turned out to be a friendly 14ers.com member named Grover, out for a multi-day trip to tag Silex, the Guardian, and Leviathan from a camp in Leviathan Basin to the north. He was as surprised as I was to have company late in the year on a minor 13er far from any city or trailhead. I thought his helmet and light mountaineering boots were unnecessary weight, but for once held my tongue. We talked for awhile, then he returned to camp while I continued to the summit. 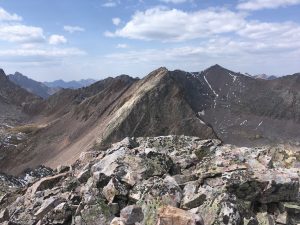 Leviathan looked unremarkable from Peak Eight to its north, but is a striking uplift slab of quartzite from the south. The broken rock on the left side of the ridge is wide enough to avoid the slab entirely, but I chose to play on it for a bit of fun. I did not find a register on any of the three white and shiny summit knobs, and paused only briefly to admire the views before examining the route to Vallecito. This turned out to be more challenging and interesting than I had expected. The east ridge lacks the west ridge’s easy broken fringe, forcing one to deal with the slabs. Near the summit, they are broken in overhanging steps to the right, requiring a bit of route-finding. A short, exposed fourth class downclimb along the crest got me off the summit. From there, I found a zigzag class 2-3 path descending south of the ridge to the saddle with Vallecito. After a short third class step, the remainder of the ridge to the summit was straightforward and solid. I saw some old bootprints in the snow on the north side, but the crest was not hard enough to be worth avoiding. 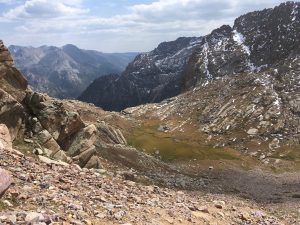 As I admired Leviathan and its lake to the west, I contemplated my options for the return. The south face is all some type of class 2, but from there I had two options: climb a small saddle southwest to regain the Jagged trail, or head down the subsidiary valley to join Sunlight Creek lower down. The side-valley looked shorter, and I saw a clear trail near the meadow below, so I opted for the latter. The first part of the descent was horribly loose and slick talus, but I found some decent scree and loose dirt to make most of the descent bearable.

Unfortunately, what looked like a use trail from above was only a goat path, which extended to the lower end of the meadow, then headed in the wrong direction. Fortunately this is Colorado, so the terrain is mostly forgiving and I did not cliff out. However, despite occasional game paths, my diagonal descent toward Sunlight Creek and the trail was slow and moderately unpleasant, with steep woods, short cliffs, and a couple minor bogs to avoid. Though this way was shorter, it probably would have been faster to take the trail.

Though well-defined, the Sunlight Creek trail is mostly too overgrown to be runnable without risking a branch to the eye, so I fast-walked the descent. Crossing the creeks at the junction again, I took a less pleasant route back to the Vallecito trail, pointlessly thrashing through some dense vegetation. Once at the trail, I knew I had about thirteen miles left. The trail has some rocky sections and short climbs, but is mostly gently downhill and fairly smooth, so I found a comfortable jogging pace, and even managed a legitimate run on some sections. I didn’t know this old body was still capable of such things after almost 30 miles. I passed a few backpackers and some dayhikers, but the trail was surprisingly uncrowded given the number of cars and campers at the trailhead. I reached the trailhead well before dark, but I was tired and my wet feet were sore, so instead of driving to my next trailhead, I stayed another night, falling asleep at a pathetic 8:30.

I have been carrying full rations of just under 4000 calories for these recent long outings, a number chosen not precisely based on mileage or time, but by feel and experience. The core is a box of Pop Tarts (1600 cal), four Clif bars (1000 cal), and ten “fun-size” Payday bars (900 cal), all of which costs about $7.50. I top that off with whatever is handy and sounds good, such as sausage sticks, Chex Mix, or leftover Lara bars. Altogether, it costs just under $10 (~400 cal/$), and leaves me with a caloric deficit that my body can cover with breakfast, glycogen, and fat stores.