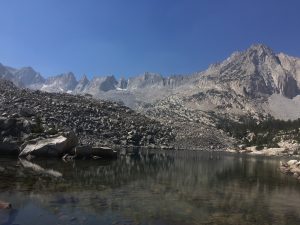 I was up in Pine Creek for another day, and a late night and late start talking to some local friends limited my options. Not wanting to deal with the crowds, manure, and horse-steps on the main trail, I headed up the Gable Lakes drainage again to explore its west fork. I was low on trail food, and didn’t have any goal in mind other than getting up above the smoke and heat, and getting some exercise. I made the familiar ride up to the trailhead, locked my bike to an old gatepost, and started plodding up the trail. 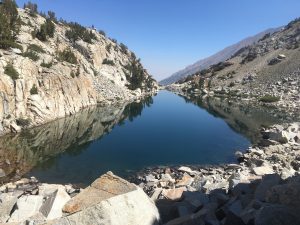 Where it passes the old mining cabin, I continued straight on a use trail heading toward the first trail on the west fork. A branch descended to the first lake, then disappeared near the unsightly discarded barrels; hopefully whatever they contained has long ago drained out, as I often fill my water from the creek below. After some large talus, I reached another, larger lake with a decent-sized island. I had seen Peak 12,542′ the day before from Gable Lakes Peak, and decided that I had enough energy to climb it. I thought I could take some slabs trending left, then cut back through a cliff band and up a possibly miserable slope of sand and scrub to what looked like the summit. 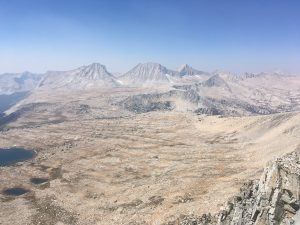 The slabs went quickly and, after a short class 3 scramble, I was above the cliff band. The upper slope was less pleasant, but there was enough rock on the sides of a sandy chute that I did not do much back-sliding on my way up. Topping out, I saw that I was a short way from the actual summit, southwest across a small plateau. I found a summit register from 2003, naming the peak “Ramu Point” after the mountain yellow-legged frogs (Rana muscosa) that supposedly inhabit the Gable Lakes drainage. I added my name after the entries from the large Sierra Challenge group, then sat to admire Steelhead Lake and Merriam-Royce-Feather to one side, and Mount Tom and the Owens Valley’s pall of smoke to the other. 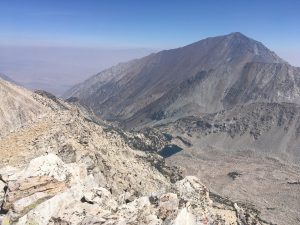 Some of the people in the register had come from Steelhead and Pine Creek Pass, and it seemed like it might be easier to descend the valley north of where I had climbed, but the former would involve the miserable horse trail, and the latter had some cliff bands, so I simply retraced my steps, using the sand where I could. I passed a couple of women sitting at the lower lake, who I had passed earlier on the way up. They were one of only four parties I saw the whole day, versus the dozens I would have passed on the Pine Creek trail. I passed some woman in a swimsuit doing something next to her car on the bike down, then cooled off in the creek next to my car to recover from the afternoon heat. Summer has returned to the Owens Valley, with triple-digit temperatures from Bishop south. It’s going to be a long fire season.